The Right To Educate 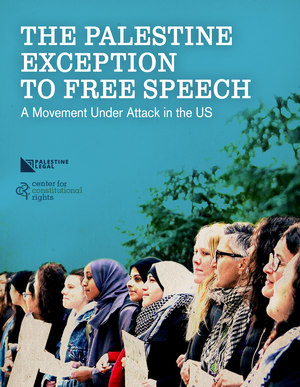 The 2016-2017 academic year has just started in occupied Palestine, and with it come the hopes and dreams of young students, but also the daily challenges of walking to school past Israeli soldiers, or driving through checkpoints in the West Bank, or assigning a culturally and politically relevant curriculum in annexed East Jerusalem, where Israel is trying to impose an Israeli curriculum in Palestinian schools.

For students in Gaza, the fear is always of another military assault, and of the severe shortage of all supplies, including electric power to study safely, away from candles. Launched in the 1970s, the Right to Education Campaign, a grassroots Palestinian movement based at Birzeit University, is testament to Israel’s longstanding assault on Palestinian education, and seeks to document, research and raise awareness about the issues facing Palestinian students, teachers and academic institutions under Israeli military occupation.

In the United States, we need to look at the flip side of the coin, namely a faculty member’s Right to Educate, to teach what they believe is truthful, relevant, and needs to be on a syllabus, as well as their right to be politically active off campus. Speaking at a protest rally should no more be penalized than playing a round of golf with a police chief.

Many of us are familiar with the egregious case of Professor Steven Salaita, a professor of American Studies who, after signing a contract for a tenured position in American Indian Studies at University of Illinois, was fired for tweeting about Israel’s war crimes during the 2014 assault on Gaza. Salaita’s case rightly made national headlines, but he is not the only one to incur the wrath of Israel apologists, and pay a heavy price for speaking out about Israel’s crimes. Palestine Legal has documented 300 cases of censorship of Palestine speech in 2014 and 2015, 85% of which were on university campuses.

In a 2009 article, Saree Makdisi and David Theo Goldberg wrote that there are “no fewer than thirty-three organizations” that are part of the “Israel on Campus” coalition, which monitors faculty teaching and organizing about the Middle East on US campuses. That number has grown since, to include organizations such as the Canary Mission, a secretive McCarthyist group devoted to blacklisting and seeking to ruin the employment opportunities of members of Students for Justice in Palestine nationally, as well as many faculty involved in pro-justice organizing.

In the past week, two faculty members, Professors Rabab Abdulhadi of San Francisco State University, and Simona Sharoni, of SUNY Plattsburgh, have also come under renewed attack for their activism to expose Israel’s violations of Palestinian rights. Additionally, the AMCHA initiative, a Zionist campus watch group, has requested that a one-credit course scheduled to be taught at the University of California at Berkeley, “Palestine: A Settler Colonial Analysis,” be cancelled.

Abdulhadi, who directs the Arab and Muslim Ethnicities Diaspora program at San Francisco State University, has just successfully negotiated a Memorandum of Understanding between SFSU and An-Najah University in her hometown of Nablus, in the occupied West Bank, going through the various administrative steps to secure her institution’s support for this collaboration. In an emailed statement, Abdulhadi wrote me that the current campaign against her “seeks to whip up hysteria, Islamophobia, racism and xenophobia to divert attention from Israeli criminality against Palestinian education and cover up the complicity of the Israeli academy in furthering violations of Palestinian rights.”

“The McCarthyist attack by Campus Watch/Middle East Forum, led by Daniel Pipes and David Horowitz, [who are] named as leading Islamophobes by the Southern Poverty Law Center, is no more than a witch hunt campaign aimed at silencing me and our commitment to justice-centered knowledge production,” she told me.

Simona Sharoni, chair of the Gender Studies department at SUNY Plattsburgh, also views the attack against her as attempts at intimidating all faculty who teach about Palestine: “The fact that a senior scholar like myself — a tenured full professor with international reputation — is being subjected to such requests has a chilling effect on junior scholars,” she noted, in reference to five requests made under the Freedom of Information Law to release letters relating to her hiring, employment, and academic activities.

Support is quickly galvanizing across the nation in solidarity with Abdulhadi, Sharoni, and the hundreds of students listed on the Canary Mission website. In an email response to my query, Sharoni wrote: “The expressions of solidarity I received in the past few days from around the world, including from Jewish scholars employed by academic institutions in Israel, underscore the fact that BDS [Boycott, Divestment and Sanctions] is a diverse and vibrant, transnational solidarity movement. The support we have on college campuses is because unlike StandWithUs, AMCHA, and other such hate groups, we do not use harassment and intimidation as part of our educational efforts. Instead, we are committed to engaging issues and current events openly, critically, and respectfully. There is nothing controversial about what we do and how we do it. It is not surprising that Zionist groups, supporting a violent state, would use bullying strategies to silence debate; What is alarming is the silence of college administrators who seem more concerned with appeasing the bullies than with safeguarding the academic freedom of their own faculty and students. Responding to attacks on faculty and students with silence is a form of institutional betrayal.”

Abdulhadi, Sharoni, and other pro-justice teachers are courageous individuals struggling to educate their students in an extremely hostile environment, where job security is always at stake, regardless of merit or tenure status. The censorship they need to overcome, in order to practice their right to educate, and the retribution they face, as they speak truth to power, make a mockery of the hallowed concept of academic freedom in the US. There should be no “Palestine Exception to Free Speech,” not should striving for justice for the Palestinian people be considered “controversial,” let alone racist or hateful. Indeed, as a contemporary manifestation of resistance to settler-colonialism, struggle for indigenous rights, and organizing against a hypermilitarized apartheid regime, the question of Palestine can and should be included in various courses.

BDS, with its focus on denouncing Israeli abuses, has dealt a serious blow to the Zionist narrative of Israel as a thriving democracy threatened by anti-Semitic hordes. Universities, however, remain contested terrain, where a relatively small number of faculty and students who support Palestinian rights face a growing harassment and intimidation campaign to hamper their initiatives. Pro-justice faculty in various departments could include a discussion of Palestine in courses on decolonial literature, indigenous studies, gender, education, geography, environmentalism, the prison-state, and more. By doing so, the isolation of the few is broken, and support for Palestine becomes a visible critical mass, as faculty enact the Right to Educate, rather than maintain a false narrative of Israeli victimhood and Palestinian aggression.