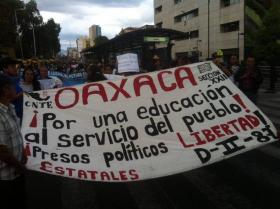 Mexico’s dissident teachers have been engaged in a strike against the Education Reform Law since May 16 of this year–four months! Their strikes of tens of thousands, led by the National Coordinating Committee (la CNTE), a caucus within the Mexican Teachers Union (el SNTE), have also engaged in protest marches, the blocking of highways and railroads, the commandeering of government vehicles, and the occupation of government buildings.

The government has responded by docking teachers’ pay, firing them, sending the police to beat them, and issuing warrants and arresting teacher leaders. One can only call what has gone on in Chiapas and Oaxaca and to a lesser extent in Guerrero and Michoacán class war.

Now there also appear to be death squads carrying out executions of teachers and their allies. So far at least three assassinations have taken place: a teacher, a parent, and a lawyer for the union. This is an ominous and very dangerous escalation of political violence.

* One teacher, Jorge Vela Díaz, was shot and killed and his wife Lorena Antonio Sánchez, was wounded on Sept. 14 when two armed men men on motorcycles attacked them at a public school in the town of Ocotlán, Morelos. Both were teachers and members of Local 22 of the Mexican Teachers Union (el SNTE) of Oaxaca.

* At the same time, another man, 19 year old Eder Zuriel Gonzen Mosqueda, a parent, was shot and killed in front of the “Juan Enrique Pestalozzi” primary school in San Juan Bautista Textepec, near the border of Veracruz. His relationship to the union is unknown, but the fact that he was shot in front of a school suggests this is related to the union.

* On Sept. 15, Agustín Pavia Pavia, a founder and leader of the MORENA party and  defender of the teachers movement in Oaxaca was shot and killed in front of his house in Oaxaca City, the state capital. He was the fifth member of the Oaxaca MORENA party to be assassinated in 2016; no one has been charged with any of the deaths.

These are only the latest killings of teachers and their supporters. On June 19, in the town of Nochixtlán, during a confrontation between teachers and police, the state or federal police killed nine teachers or supporters, while 100 people were wounded (half teachers, half police). Nochixtlán, which should be described as a police massacre of teachers and community activists, did not represent the kind of assassinations we are now seeing.

Unfortunately, given the 200,000 people killed in the drug war from 2006-2016—many of them assassinated—together with the 30,000 kidnapped, many may simply see a few dead teachers as trifling casualties in another war, the war against the unions that has also gone on since 2006. (On drug war casualties see PBS Frontline.)

Such assassinations of teachers are not new. During the strike of Local 22 in Oaxaca in 2006, a strike accompanied by a broad civic uprising sometimes referred to as the “Commune of Oaxaca,” death squads killed at least 20 and perhaps as many as 27 teachers and their supporters. We seem to be witnessing a return to those tactics by the teachers’ political opponents, presumably the government, the Institutional Revolutionary Party, or Oaxaca business interests.

All of this is taking place as the Mexican Attorney General’s chief investigator Tomás Zerón—responsible for solving the the murder of six people, wounding of 25 others, and kidnapping of 43 students in the City of Iguala, Mexico on Sept. 26, 2014—resigned. After two years, the government has not been able to solve the case and has indicted no one for the murders.

Despite Zerón’s failure at that job, Mexican President Enrique Peña Nieto immediately promoted him to be Technical Secretary of the country’s National Security Council. Or perhaps the president rewarded Zerón because he believed that by failing to solve the case the investigator had protected the interests of the government and the ruling party.

Despite the rising tide of violence, teacher protests continue in Oaxaca, Chiapas, Guerrero, and Michoacán, joined at the moment by teachers in Sinaloa, Chihuahua, and Jalisco. Chiapas Locals 7 and 40 called their teachers back from Mexico City, where they had been sitting-in at the Ciudadela, and launched new protests in their home state.

With the strike having gone on so long, it is not surprising that there are rising tensions among the teachers. In Chiapas the attempt to discuss the state of negotiations in Local 7 led to a conflict between teachers who seek to find a way to end the strike short of overturning the Education Reform Law and those who demand to continue the strike until they attain a complete victory. Hundreds of teachers and interrupted the Local 7 meeting, demanding that there be no discussion of the state of negotiations and the struggle continue unabated.

Posted September 18, 2016 Human rights, Mexico by Dan La Botz
About Author
DAN LA BOTZ is a Brooklyn-based teacher, writer and activist. He is a co-editor of New Politics.