A Response to Riad Azar on Sanders' Foreign Policy

I find it odd that my friend and fellow New Politics board member Riad Azar should center his criticism of Bernie Sanders’ foreign policy on Sanders’ supposed “irresponsible” “isolationism.” 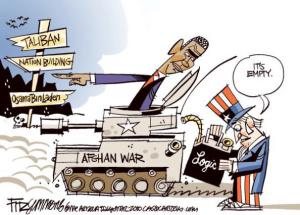 It seems to me that a critique of Bernie’s foreign policy should begin by criticizing him for voting for the Authorization for Use of Military Force resolution that paved the way for U.S. military intervention in Afghanistan, and for refusing to unequivocally condemn Israel’s shameful 2014 war on the people of Gaza. These positions might or might not be sufficient to preclude support for Bernie if he or someone like him ran as an independent — to my mind that would depend on the overall dynamic and trajectory of the campaign — but in any case they represent Bernie’s deep failure to consistently break with U.S. global imperialism and Israeli repression, and should form the central part of a critical assessment of his foreign policy stance.

Riad writes, “Pulling out of the Middle East and leaving the ‘Muslim nations,’ as Sanders calls them, to go through their own version of the European Reformation is as irresponsible as it is inaccurate. Even if the United States were to completely withdraw from the Muslim world, US support for sub-imperialist powers in the Muslim world is enough to make us responsible for what happens there in the future. In other words, one cannot plan to withdraw from the region while continuing support for Israel, Saudi Arabia, Turkey, and Pakistan, and hold the belief that the support of these nations does not amount to interference.”

What is Riad driving at here? Of course progressives should demand that the U.S. embrace a consistent, democratic, non-militaristic foreign policy committed to social justice everywhere, and that it stop supporting Israel, Saudi Arabia, Turkey and Pakistan in the face of their violent anti-democratic actions. But does Riad think it would be a negative development if American popular opinion, crystallized by anti-war activists, were to succeed in pressuring Washington to end its military interventions in the Middle East if the underlying imperial nature of U.S. foreign policy has not yet been successfully dismantled? Riad seems to imply it would be meaningless, and perhaps dangerous, when he writes “Retraction from the Muslim world without a critique and reevaluation of these relationships and alliances is useless.” This is a strange sort of purism, suggesting that if the left doesn’t gain an immediate total, comprehensive victory against U.S. empire, its success in forcing Washington to retreat from specific military ventures should not be supported and celebrated. In fact, however, the opposite is the case: whenever we succeed in forcing the U.S. not to intervene militarily in one country or another, it removes one (though certainly not the only) major obstacle to the emergence and victory of grassroots democratic movements in those countries, and it strengthens the anti-war movement here at home for future and broader domestic and foreign policy battles.

So yes, Bernie should be criticized for his failure to advocate a fundamentally new U.S. foreign policy, but he shouldn’t be condemned as an irresponsible isolationist for the steps he has taken to oppose US military intervention, such as his opposition to the war on Iraq.

*Joanne Landy is Co-Director of the Campaign for Peace and Democracy and a member of the New Politics editorial board.