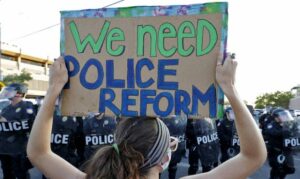 The culture of urban police departments cannot be changed from within or without or around the edges.  Current political solutions put forth at state and federal levels have no chance of producing any meaningful change.  Those who urge disbanding these departments are correct.  Starting anew is the only way to build healthy and accountable organizations.

Many urban police departments can be characterized as regressive groups. These groups exhibit a number of dysfunctional characteristics to include group narcissism and shadow projection, psychic numbing, stifling dissent, and obedience to authority.

The large size of urban police departments contributes to their regressive nature because the individuals who comprise them are prone to relinquish their individual identities in favor of feelings of anonymity, unaccountably, and invincibility, thus making them more like a crowd and susceptible to collective behavior.

Urban police departments are often poorly developed. Internal conflict remains unresolved and minority voices are repressed. Poorly developed groups evidence a kind of behavior that is primitive, impulsive and psychologically immature – similar to that of a mob. When combined, these traits lead to a kind of “group mindlessness,” in members who distort their inner and outer reality to conform to a dominant group view.

Today that view is framed by a warrior mentality, this phenomena is enhanced by the large number of recruits who have migrated from the armed services to the police.

Group narcissism and shadow projection are the most pernicious characteristics of these groups. Groups are bound together by a force called cohesiveness. In productive and healthy groups, cohesiveness is generated from within as a manifestation of group pride, “we-ness” or esprit de corp. Pride develops from the synergistic interactions, accomplishments, and successes that result when members value, respect, and trust one another.

Often urban police departments develop cohesiveness or group narcissism, by encouraging animosity toward an out-group or enemy, in this case people of color.  As a result, group members are able to overlook their own deficiencies by focusing on the deficiencies of the out-group.  It is often the shortcomings of the police, frustration, anger, rage, and hostility that are projected onto the out-group.  There is a psychological motivation to “kill off” those unwanted parts. Projection of the police’s collective shadow is made easy by dark skinned people.  Just consider the skin color of all of the people the United States have gone to war with over the last 75 years.

By splitting off and projecting outward their dark, shadowy side, police maintain an illusion of harmony. A public myth created by the group disguises any internal conflict. Members often describe themselves in glowing terms and promote the fiction that they are a bulwark against anarchy and that their actions are heroic.  As members numb themselves to the apparent contradictions between the public myth and the group’s true nature, their ability to perceive reality is severely diminished. The greater the pressure for these groups to suppress critical thinking and deny their own dark side, the more likelihood that there will be dehumanizing actions against their perceived enemies.  Dehumanizing the out-group makes it easy to commit acts of violence against them.

Psychic numbing occurs over time as police anesthetize themselves to contradictions within their department. This psychic numbing process deadens feelings aroused by agonizing decisions that members are required to make.  These decisions are often in contradiction to their individually held ethical and moral principles. When numbing is complete, member values become synonymous with those expressed by the group, enabling members to participate with little or no noticeable discomfort in the group’s activities. As group members repress and internalize the contradiction between their own ethical values and those of the group, illness, depression, suicide, obesity, substance abuse and anxiety often result.

This numbing process that police undergo is critical for the continuation of the group. It allows members to participate in acts of violence against others without the personal dissonance they might have experienced. Members who are unable to conform or deaden their awareness are customarily shunned and ultimately excluded from the group.  Those who believe that changing the training methods in the police academy to emphasize more humane and compassionate approaches to policing overlook that the real indoctrination takes place on the streets by senior officers.

Stifling dissent. To protect their group myth, many police will not only commit physical and psychological violence against out-groups but will silence members who seek to expose the group’s own shortcomings.  This is commonly known as the blue wall of silence. Because these police departments have been unable to successfully negotiate effective norms for the expression of conflict and its resolution, they avoid it. Criticism is muted, and disagreements are damped. Access to information that challenges group beliefs and its public myth is severely limited.

Without dissent as a corrective and stabilizing factor, regressive groups, are capable of extreme actions.  Because minority opinions are repressed and labeled as corrupt, the range of options to which regressive group members have access are restricted.

Community views are discounted, even those of civilian review boards.  Eventually these group members self-monitor their contact with outsiders and self-censor reading or other materials that conflict with the group’s dominant view. In fact, police have media outlets like Law Enforcement Today and the website Thee Rant that promote hate speech and violence.

This self-censorship lessens emotional discomfort, facilitates psychic numbing, and permits group members to tolerate the coercion and punishment used to stifle dissent. In the multiple police killings, there were other officers who stood by and watched the brutality.  Simply making a law that requires police officers who witness acts of brutality by their colleagues to intercede or report them will not change the underlying culture that demands obedience to the group.

Obedience to authority is emphasized in these hierarchical groups as members surrender their own critical thinking capacities to leadership who emphasize obedience, loyalty, and the suppression of criticism.  Again, many recruits come from a military background where blind obedience is emphasized.   Moreover, many police leaders, particularly union leaders, are adept at manipulating their member’s idealism to serve their own ends.  If officers do not gain autonomy, participate in decision making, and assume responsibility for their actions within the group, they will remain in the role of the child with only one responsibility—obedience.

Summary. Regressive groups maintain the appearance of normalcy under non-stressful conditions. However, there is little flexibility in these systems, and stress increases their destructive potential. In a situation of prolonged discomfort such as these demonstrations and riots, police naturally, almost inevitably, tend to regress and become more primitive by perceived threats to their survival. When threats occur, these groups will resort to crude, non-rational methods of defending group cohesiveness.  Under periods of extreme stress these groups are capable of violent and barbaric behavior. Recently we have seen the senseless attacks on peaceful protesters with police wielding batons violently.

Rarely is it possible to reform these departments because it requires a willingness on the part of group members to examine their own behaviors, reclaim shadow projections, address internal conflict and recreate healthy norms of behavior.  All of these expectations run counter to policies advocated by police unions.  Further, these police departments have developed norms of behavior, both overt and covert, These norms are so reified that they are impossible to change.  Finally, re-hiring these officers, particularly those in the higher ranks would not change the problem. These officers bring with them the norms of behavior from their previous groups.

For noteworthy change to occur these urban police departments must be disbanded.  Only then can a new model of policing with emphasis on community engagement and problem solving be constituted.  Future recruits to such an organization can be more carefully screened to identity those capable of independent morality and unlikely to be manipulated by dysfunctional group behavior.

Posted August 8, 2020 Civil Liberties/Repression, United States by Jason Schulman
About Author
Bud McClure is professor emeritus at the University of Minnesota Duluth and the author of Putting a New Spin on Groups: The Science of Chaos.