END_OF_DOCUMENT_TOKEN_TO_BE_REPLACED

A Plant Closing War, Viewed From Inside

Last winter, protesters wearing yellow vests commanded center stage in France. Their grassroots challenge to the neoliberal regime of President Emmanuel Macron drew on a long tradition of labor militancy, including factory closing fights. When these protesters still had blue . . .

END_OF_DOCUMENT_TOKEN_TO_BE_REPLACED 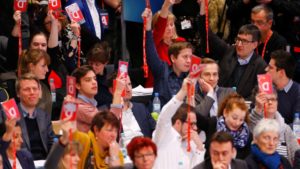 The SPD — the Social Democratic Party of Germany — is Germany’s oldest political party. Its history includes both revolutionary struggle against capitalism and the betrayal of revolution. Many still consider it a socialist party, and its youth organization identifies as Young Socialists.

Lou Andreas-Salomé vs. The Patriarchy

Lou Andreas-Salomé, The Audacity to Be Free

This biopic is not subtle. From its opening scene featuring a pyre of books and a frenzied crowd cheering as a manic speaker justifies the burning of Marx, Trotsky, Freud and “everything that is not German” followed by a romp through Lou Andreas-Salomé’s prodigiously intellectual life and her last days as a target of the Nazis, the film is as much about the pain of choosing a vaporous freedom as it is the flailing pursuit of fulfillment by a self-assertive, iconic woman.

[Ed. note: The list of signatories to this declaration includes seven out of nine German trade union presidents, all members of the executive boards of the German Trade Union Confederation (DGB) and IG Metall, plus some (primarily social-democratic) politicians at the Bundestag and European Parliament levels, including the vice-chairman of the SPD, as well as numerous academics.]

The political landslide in Greece is an opportunity, not only for that crisis-ridden country but also for a fundamental reassessment and revision of EU economic and social policy.

Passionately watching last week’s election returns* at the Rosa Luxemburg Stiftung’s office in New York, without ever having been to Germany or learned more than a half-dozen German words, was an unusual experience. It was easy enough to orient my sympathies — as an American socialist they stood with the Left Party.

Response to Review of Wild Socialism

I would like to comment on the Leninist critique of my book Wild Socialism: Workers Councils in Revolutionary Berlin, 1918-21 by Dan La Botz on your website. His review contains several errors and misinterpretations.

German Resistance to the Nazi State

The book’s title translates a term, "Rote Kapelle," that the Gestapo applied to a relatively small circle of men and women in Berlin, active in seeking to weaken the political authority of the Hitler regime during the 1930s and early 1940s. The term, however, was meant to convey the notion that the group was involved in a Soviet conspiracy — a notion that survived the war and was perpetuated in the ensuing climate of a public opinion shaped by the cold war and hostility to the Soviet Union.

Behind the Euro Crisis: Germany Gambles on the Old Dream of European Hegemony

German industrial and financial power is the key to understanding the complex and often confusing international maneuvers around the Crisis of the Euro. Germany is Europe’s industrial powerhouse, the only country that has survived the Great Recession with a healthy economy, low unemployment, rising GDP, social stability and a favorable balance of trade. Yet, only within the solid framework of a strong European Union can Germany, Europe’s principal creditor nation, ever hope to collect on her Southern European loans and investments.

Hannah Arendt Against the Facts

[The publication in 1963 of Eichmann in Jerusalem: A Report on the Banality of Evil by Hannah Arendt provoked a storm of controversy which has been going on for decades. Arendt, the author of the famed The Origins of Totalitarianism claimed that Eichmann, organizer of the Holocaust, was not a fanatic who hated Jews but a normal man, and that Jewish leaders and organizations cooperated with him to an extraordinary degree.