END_OF_DOCUMENT_TOKEN_TO_BE_REPLACED

Exodus to the Ukraine-Poland border: “They turn us away because we’re black!”

Many Africans fleeing the war in Ukraine claimed on social media that they had been rejected at the Polish border because of their skin color.

END_OF_DOCUMENT_TOKEN_TO_BE_REPLACED 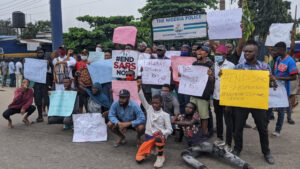 A movement against police brutality has swept across Nigeria. Mass protests have brought out tens of thousands of people in cities across the country. At the center of the fury is SARS, a notoriously brutal special unit of the police. Emma Wilde Botta speaks with Lagos-based Kasope Aleshinloye.

The anthropologist and activist David Graeber died earlier this week. Here, we repost remarks that he made in response to Gilbert Achcar at the time of the NATO bombing of Libya in 2011, as a testament to Graeber’s political commitments and acumen.

Belgium’s Colonial Crimes in the Congo: A Duty to Remember

Thanks to the Black Lives Matter mobilizations against racism in general, and racism against black people in particular, becoming an international phenomenon more and more people are seeking to know the truth about the dark past of the colonial powers and the continuation of neo-colonialism up to the present times.

The Historical Retrieval and Controversy of Walter Rodney’s Russian Revolution

The posthumous publication of Walter Rodney’s book on the historiography of the Russian Revolution is a remarkable accomplishment of historical retrieval, and it provides us with an opportunity to look more deeply into Rodney’s relationship to Marxism, Soviet . . .

END_OF_DOCUMENT_TOKEN_TO_BE_REPLACED

Word War Two as the death-knell for colonial empires is a well-trodden and essentially erroneous narrative. Empires’ relationships with their colonies were uprooted, modified and given the gloss of ‘independence’ but retained injustice and exploitation at their core. In Central . . .