Living through the current anti-racist, anti-police protests around the US and around the world now, we’re hearing a lot of talk about non-violence and non-violent protests, including invocations of the distorted, deradicalized, liberalized “legacy” of Martin Luther King, Jr. However, what we’re not hearing a lot about is pacifism. While pacifism has historically been interpreted as a political philosophy of non-violent resistance, what is more essential to the pacifist tradition is what it fights against, not necessarily its tactics. A genuine pacifist movement is a movement against systems of violence, and in that sense the on-going wave of anti-racist movements are decidedly pacifist—even including instances where protesters engage in looting, burning, and tactical violence in response to the direct state violence practiced by police forces globally.

From Non-Violence to Anti-Violence

Pacifism is always anti-violence, but not necessarily non-violent in tactics. And a crucial dimension of the distinction here is connected to a broader distinction between direct and structural, or systemic, violence—to say nothing for the difficulty of clearly analytically categorizing what counts as violence (which is also always a political determination). On this latter point, more specifically, some may consider private property destruction a kind of violence; the use of force in self-defense is also considered by some to be violent. These may be useful academic arguments to have at some point, but they are not the important debates at the moment.

Instead, by focusing on the anti-violence goal of these anti-racist movements, and other similarly radical movements, we can see the protest movement thinking and acting with a pacifist political ethic that avoids being hamstrung by any pacifism that is reducible to passivity in tactics or strategy.

Non-violence and pacifism are often used interchangeably, but they shouldn’t be. While non-violence can be thought of as a category of tactics for achieving political change without violence of any kind, pacifism is best understood as a political philosophy rooted in an ethico-political commitment to achieving a world without violence—usually with the caveat that the best way (or perhaps the only way) to achieve this transformation is through non-violent tactics. However, the determination of the most effective tactics is a strategic judgement not necessarily inherent to pacifism.

Pacifism is anti-violence, and because its proponent actively oppose violence it would make sense that they would want to avoid violence if at all possible. Does this mean pacifists don’t engage in active self-defense? Perhaps, but I am unaware of any strict form of pacifism that would prohibit such self-defense. The implication of all of these points taken together is that pacifism is often interpreted as prohibiting the tactical use of violence to achieve the abolition of violence. It also has further led to the reproduction of a rigidly individualized and direct conception of violence. That is, violence means when one person or group of people directly physically harm another (e.g., a stabbing, shooting, or beating)—and structural violences are ignored (e.g., policies that limit access to health care or laws that protect domestic abusers or protect killer cops from legal consequences—the latter two of which often overlap). 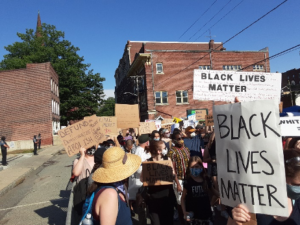 It should also be noted that direct violence and structural violence are analytically distinct categories, but only abstractly. In reality, structural violences are often the root causes of most direct violence. For example, laws that fund the military and empower unaccountable use of heinous, human rights violating warfare often, unsurprisingly, lead to the use of heinous, human rights violating acts of war by individual soldiers, bomber pilots, and drone operators. A more everyday example would be policies that deny people the right to a living wage lead people to engage in behaviors (like “side hustles” or joining gangs) that are considered illegal and can occasionally (though not as often as the media would have us believe) lead to interpersonal conflicts than can become violent. However, structural violence is violence, nonetheless. It is violence when a doctor “streets” a stable but still-unhealthy patient without insurance who then dies because of the lack of necessary further treatment. This is, as Engels called it, “social murder.” The doctor is following the rules, even engaging in legal or otherwise required behavior. In this case, the rules themselves are the violence. This is the structural violence of racist, cisheterosexist capitalism, which points us to another word that I hear a lot at these protests, though less so in the mainstream media, and that is (the need for) “socialism.”

It is absolutely no surprise at all that people, particularly people of color, are increasingly acting on their understanding that the capitalist order rests on deeply entrenched racism and white supremacy; that, as Malcolm X famous said, you can’t have capitalism without racism. While there remain real concerns about what Keeanga-Yamahtta Taylor and Cornel West have repeatedly criticized as “Black faces in high places” discourses, which suggest that what is really needed for equality and racial justice is to have more Black people in leadership positions within the existing system, I’ve not seen a lot of this kind of problematic symbolic rhetoric in the current wave of protests. Symbolic representation is important to achieve the deeper substantive representation that will be vital to the achievement of racial justice, but this approach (perhaps best represented by the presidency of Barack Obama) often functions to redirect, and indeed limit, the more transformative demands of the multi-racial working class—and the radical Black working class in particular.

What has heartened me from my experiences during these recent protests is the lack of this kind of approach (often referred pejoratively, and not without reason, as liberal identity politics). These protests are offering systemically-oriented demands that express a deep pacifist political ethic rooted in an increasing dissatisfaction with “Black faces in high places” and an overt acknowledgement that police violence, and white supremacist violence itself, is maintained and reproduced by other related systems of violence, but the capitalist system in particular. For many protesters, (democratic) socialism is being rearticulated, as it has always been at its best, as a direct critique—and alternative to—racism itself. This is not to suggest that any protesters (at least that I’ve come across) are of the belief that socialism, understood in its more reductive form, would somehow automatically abolish racism. Such fanciful thinking is more often an accusation that socialists have not historically taken racism seriously enough, and that is a fair critique. Pacifism then, at its strongest, requires that all systems of violence be opposed and struggled against—and that is exactly what we’re witnessing in our streets. These protests, the eventual outcomes of which are still unknown, are reflecting a development in radical activism: people are making a pacifist critique against all structures of violence with loud demands for systemic change aimed at a world without violence—which means, for many, a world without police and a world without capitalism.

These protests are more deeply pacifist though, because they reflect the knowledge that what is being struggled against is systematic; they are not primarily oriented towards ending direct violence as such. They are focused on the structural causes of direct violence; that is, they are primarily opposed to the structural violence of policing and the broader criminalization of black and brown skin and poverty. In this context, to be pacifist is not to be primarily concerned with whether a building is burned or a cop gets hit with a water bottle, but it means being hyper-focused on doing whatever is necessarily to achieve a world without violence—a world without racial capitalism and its badged enforcers.

It is this radical opposition, combined with the visceral preference for, without a fetishization of, non-violence in tactics, and even with the occasional tactical use of property destruction and symbolic—albeit somewhat dangerous—physical force (what we might more casually refer to as “direct violence”) that makes these movements pacifist. On the one hand, tactics are important, but only insofar as they connect to a strategically delineated goal—and the goal of these protests is structural non-violence; that is to say, they are anti-violence.

The police and their defenders on the other hand know only violence. The social function of policing is entirely violent. It cannot be otherwise without ceasing to be what it is. Even in the moments when specific police officers aren’t engaged in direct violence (e.g., police brutality), their social function is a product of structural violence (the legal empowerment of armed defenders of capitalist property relations, patriarchy, and white supremacy, supported with resources that are otherwise desperately needed to keep people alive and living decent humane lives). The use of public resources for policing means poverty is increased and therefore “crime” is increased, which tautologically “justifies” the existence of policing.

Among the protesters, with whom I’ve spent countless hours over the past month, people understand this. Their slogans reflect this. The recent “addition” of “Defund the Police” to the Black Lives Matter street mural in Washington D.C, is just one example of the emergent pacifist consciousness within this movement. The dissatisfaction of cops taking a knee with protesters also reflects a deep awareness that this moment is not about individual behaviors, the direct violence, of police officers. It is about the structural violence that policing in America entails.


Bryant William Sculos, Ph.D. teaches global politics and political theory at Worcester State University and Florida International University. He is a contributing editor for the Hampton Institute and founding curator of LeftHooked, a monthly socialist media aggregator and review with the Hampton Institute. Bryant is also the Politics of Culture section editor for the open-access journal Class, Race and Corporate Power. He is the co-editor (with Mary Caputi) of Teaching Marx & Critical Theory in the 21st Century (Brill, 2019; Haymarket 2020).