One Massacre, Many Partners in Crime 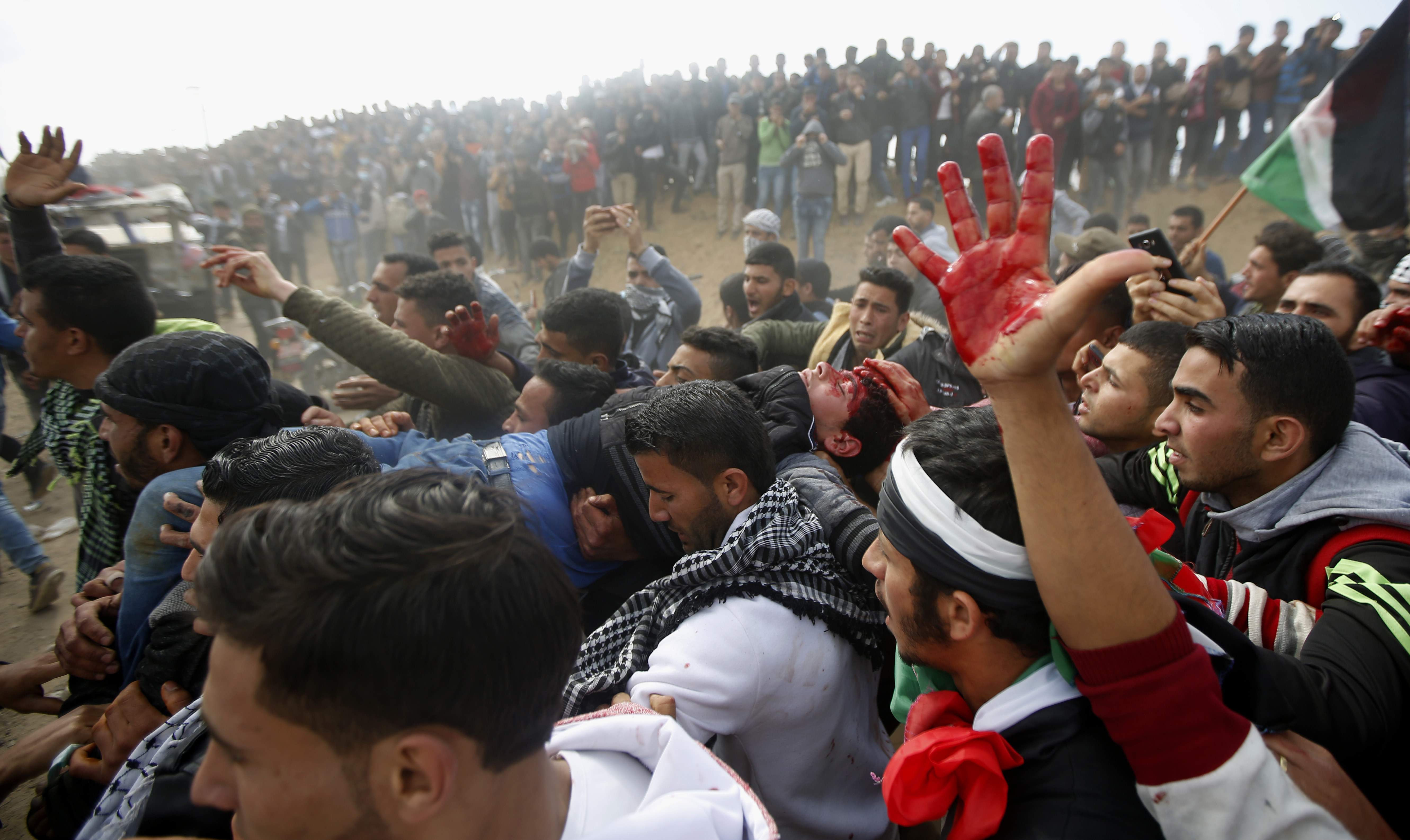 One hundred and seven Palestinians have been killed and more than 10,000 wounded by Israeli troops over the past seven weeks along the border fence between the Gaza Strip and Israel. The Palestinians stormed the fence and Israeli soldiers responded with live fire. On the bloodiest day, May 14, when the new American embassy in Jerusalem was inaugurated, 61 demonstrators were slain. This massacre was not necessary: the IDF did not need to employ snipers to cut down young people who galloped toward the bullets, and Hamas could have prevented those youngsters from approaching the fence. A quiet protest would have been no less effective.

The protest was not quiet because both sides – the Israeli right-wing government and the Hamas government in Gaza – provided an identical, although uncoordinated, script. Israel supplied the snipers and Hamas, the victims. There is no doubt that those who squeezed the trigger are responsible for the massacre, and they must be held to account. But once again, the massacre could have been prevented! After all, when it ends, each side will claim victory. However, Israel lost the public relations battle. However, with Trump calling the shots, public opinion is a negligible factor. Hamas, for its part, did not manage to achieve what it most needed, that is to lift the siege of Gaza.

The fence that separates Israel from Gaza is not a border. It is a fence that encircles the world’s largest open-air prison, where 2 million Palestinians live in worse conditions than those in Israeli prisons, who at least receive three meals a day. Gaza is not a state. It is controlled by Israel, who is the sole sovereign in Gaza, even after having withdrawn its army and settlers.

Israel’s unilateral disengagement from Gaza did not change Gaza’s legal status. In 2005, Israel withdrew from the Gaza Strip without any agreement. The area remained for a short period under the control of the PA (Palestinian Authority) and, after a bloody military coup in June 2007, the territory fell to Hamas control. The PA in Ramallah does not recognize Hamas’ rule, and thanks to Ariel Sharon’s “wise” policy of leaving unilaterally, Gaza became a No Man’s Land. Israel has an interest in maintaining the Hamas regime in order to preserve the political and geographic divide between Gaza and the West Bank. For this reason, responsibility for Gaza’s humanitarian disaster can be placed at Israel’s door. All the above pertains to the ‘here and now’, and not to the Nakba which took place 70 years ago.

Despite the fact that Israel is directly responsible for what is happening in Gaza, it is secondary to the ongoing struggle between Hamas and Fatah over control of the Palestinian Authority. While Israel imposes a siege on Gaza, Abu Mazen (Mahmoud Abbas) makes sure to tighten the noose. While Hamas exploits the struggle against Israel to attack Abu Mazen and undermine PA legitimacy in Ramallah, Abu Mazen is using the humanitarian crisis in Gaza to subdue Hamas and make life difficult for Israel.

As Israel turns a cold shoulder to Abu Mazen and basks in Trump’s support, Abu Mazen is turning the screws and creating conditions that will ultimately force Hamas into a conflict with Israel. He keeps fuel from reaching power stations in Gaza, prevents drugs from reaching Gaza hospitals, and avoids paying salaries to PA officials employed in Gaza. He is bringing Gaza to the brink of starvation, poverty and darkness. Life in Gaza is impossible. The Israeli government and army are opposed to Abu Mazen’s policy, but they are not taking action to change the situation. Thus, when Hamas orchestrates the “March of Return,” Abu Mazen condemns Hamas for encouraging children to be killed at the fence.

Israel, the PA, and Hamas are the main actors in the tragedy playing out before our eyes. But there are others who are no less important: the Muslim Brotherhood headed by Turkish President Erdogan and, as expected, Qatar. There’s also Egypt and Saudi Arabia, both being led by Donald Trump, whose commitment to his evangelical base brings him to a one-sided support of Israel.

In this tragedy there is no good and bad, there’s only bad.And following the massacre in Gaza, it is difficult to determine who is worse: Erdogan joined forces with Putin and allowed Iran and the Russians to commit atrocities and occupy the city of Aleppo; Sisi massacred 2,600 Muslim Brotherhood demonstrators in Cairo’s Rabaa al-Adawiya Square during the military coup; Hamas maintains a cruel and dictatorial regime that suppresses any opposition, and Abu Mazen reached a new low by expressing anti-Semitic positions while maintaining close security coordination with Israel in order to ensure his autocratic rule. It is impossible to separate what is happening in Gaza from what is happening in the Arab world and in the internal Palestinian arena. The Israeli Right is alive and kicking, fuelled by the Fascist crusade now sweeping the world – from Washington, through Europe, Russia, and Turkey to the Middle East.

The humanitarian situation in Gaza cannot be resolved when the Right rules in Israel without serious opposition. It cannot be settled with Abu Mazen as head of the PA, it cannot be solved when Sisi controls the Rafah crossing, and it will not be solved when Hamas subordinates the situation of Gaza to its narrow interests – first and foremost to consolidate its rule and defeat Fatah.

In light of the danger of humanitarian collapse, various “solutions” are floating around which, until now, have produced nothing. The Israeli army is interested in giving Hamas a floating port off the coast of Gaza, and Transportation Minister Yisrael Katz supports it. Many demand that Israel agree to a hudna (cease-fire) with Hamas in order to ensure a temporary quiet. Some demand that Abu Mazen end the security coordination in order to pressure Israel to ease the military blockade of Gaza. And there are those who demand an end to the siege without preconditions. Nonetheless, all these solutions have many opponents with conflicting interests.

In Abu Mazen’s view, if Israel were to lift the siege on Gaza and normalize life there, this would perpetuate the division between Gaza under Hamas and the West Bank under Fatah, burying the idea of a Palestinian state. Egypt opposes a Hamas entity affiliated with the Muslim Brotherhood bordering Sinai. The Israeli Right wants to tame Hamas, as is evident from the words of Defense Minister Avigdor Lieberman “rehabilitation in exchange for demilitarization”, while Hamas argues that its weapons of resistance are sacred and are not negotiable.

Therefore, in the current political situation, there is no one to save Gaza. As long as the Right controls Israel, and the Palestinian people are at the mercy of Fatah and Hamas, there is no hope on the horizon. The policy of “sit and do nothing”—of managing rather than solving the crisis—is not an Israeli invention. It is dictated by the White House. It is not just employed here, but also in Syria, Libya, Yemen and Iraq. It is no accident that Netanyahu shuttles between Putin and Trump, dancing to their tune. He is facing Hamas in Gaza and Iran in Syria without having much in his tool box other than planes and snipers.

The solution in Gaza is connected to a solution in the West Bank, in Syria and in Egypt. There are those who are looking for a quick fix, floating ideas about lifting the siege and the two-state solution without examining an alternative economic and political vision. On the other hand, there are those who think that it is possible to stand up for human rights in Gaza while at the same time supporting the massive uprooting and murder of Syrians by Assad. They have lost their moral compass. The solution is to create an Israeli-Palestinian political movement that will demand democracy and equality for all. This is the only counter-balance to the Israeli Right, Fatah and Hamas – those who have brought us to this precipice.

– Translated from the Hebrew by Robert Goldman

Yacov Ben-Efrat writes for Challenge, a magazine of the Da'am Workers Party, a revolutionary Jewish-Palestinian party in Israel, of which he is the General Secretary. He was sentenced in 1989 to 30 months jail as editor of the bilingual weekly Derech Hanitzoz (Way of the Spark), which was financed by the Democratic Front for the Liberation of Palestine, branded as a "terrorist" organization by the Israeli government.