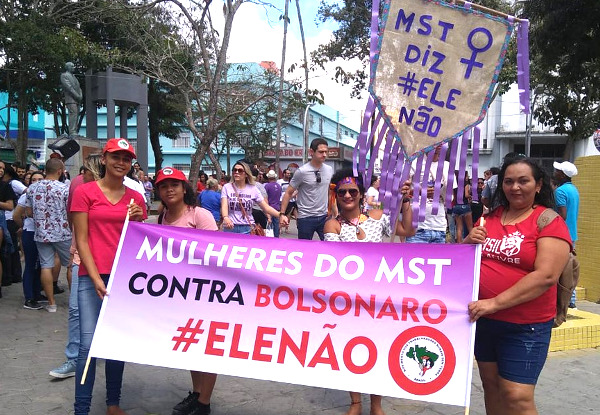 Comrades and Friends of MST (Landless Rural Workers’ Movement) around the World,

We would like to share some of our views on this delicate moment of Brazilian politics in the last week of the election campaign:

1. This election is very special because it can mean the victory or defeat of the coup against democracy started in 2014, which continued with the impeachment of President Dilma Rousseff, extended into the illegitimate government of Michel Temer. For us, the coup is not just the moment of impeachment. The coup is the project that the elites and the financial capital did not have the strength to conquer in the elections and that needed to use the force and the illegality of other apparatuses like the media and the judiciary to execute. Thus, the coup is also the reforms of withdrawal of rights, the promotion of unemployment and, mainly, the political imprisonment of president Lula, without evidence and at a fast pace, to prevent that the favorite candidate of the population disputed the elections.

2. We further understand that the coup is a symptom of the profound economic, social and political crisis that affects not only Brazil, but the whole world, as a result of the hegemony of international financial capital and the accelerated destruction of natural assets, social rights and State around the world. It is important to have this understanding, because the elections will not solve this crisis and probably, even with the victory of the popular forces, we will have the continuity of the crisis and the confrontations that marked this period.

3. The Brazilian population understood that there was a coup and that it was necessary to defeat it. But it did not choose the path of the streets and mobilizations. With the exception of the victorious general strike that blocked the pension reform. In this way, the people chose in Lula’s candidacy the way to express its discontent and desire for change. The MST defended Lula’s candidacy as far as possible. We made a beautiful march to register his candidacy and with other popular movements we made a hunger strike that lasted 26 days and denounced the manipulations of the Judiciary System. And we have kept the Camp Lula Livre in front of the Federal Police’s jail in Curitiba as a living testimony of our conviction of the president’s innocence. Despite protests from the UN and a large civic movement by Lula Livre, the judiciary prevented President Lula from running for the elections. Faced with this, the Workers’ Party chose to launch the former Education Minister and former Sao Paulo mayor Fernando Hadadd as a candidate. And we, like the other democratic forces, decided to support his candidacy, because it represents the defeat of the coup, Lula’s freedom and the possibility of overcoming the serious economic and political crisis and resuming a path of development of the country.

4. On the other hand, in these four years of the coup, the Brazilian right has used numerous tools: fabricated social movements, active militancy of the judiciary and the media against democracy … One of the fronts of these attacks was the encouragement of leaders with fascist speech like Jair Bolsonaro, a federal deputy for three decades (but presenting himself as an anti-system), former army captain, defender of the military dictatorship and torture, and the withdrawal of countless social rights. Bolsonaro is advised by military and foreign-funded funds economists. Bolsonaro’s speech of violence, homophobia and radicalism grew with the support of the media, who hoped that in the polarization between him and the left, the traditional right might present itself as “moderate” or “center.” However, the population decided to punish the parties that carried out the coup, such as the PSDB of Fernando Henrique Cardoso and Aécio Neves (whose candidate Geraldo Alckmin is expected to be fourth or fifth) and Michel Temer’s MDB (whose candidate Henrique Meirelles should not be among the top six). And the creation fled from the control of the creators, taking the vows of the old right.

5. We understand, therefore, that in this election there is a clear dispute between two antagonistic projects: the continuity of the coup and its reforms, represented by its more radical and authoritarian version, Jair Bolsonaro, and the reconstruction of democracy and rights, represented by Fernando Haddad. It is, therefore, an election marked by the class struggle. For a project that combines the most conservative sectors of our society and international capital against the workers’ project.

6. From the point of view of foreign policy, this dispute of projects is represented on the one hand by Bolsonaro’s project, a more aligned U.S. policy, non-recognition of Palestine, and attacks on Venezuela and the progressive governments of Latin America. On the other hand, by Hadadd’s project, of resumption of Latin American integration and of strengthening relations with the countries of the Global South.

7. Therefore, this will be a difficult election, disputed both at the polls and on the streets, as demonstrated by the gigantic women’s movement #EleNão (#NotHim) this past weekend. We also know that the results of this election will decisively influence the direction of Latin America and can signal a new progressive offensive throughout the world. For our part, we will continue to fight for popular agrarian reform and for a popular project for Brazil, and we ask our friends on all continents to remain attentive to developments in Brazil and to denounce both the conservative offensive and the political imprisonment of President Lula. •

Originally posted at The Bullet.