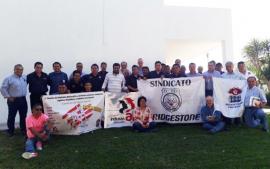 Mexico’s auto workers are for the first time forming a national federation in what is a very significant development both for Mexican labor and for Mexican society as a whole. Ten organizations representing over 25,000 Mexican workers have committed to the new organization.

There have been conversations between Mexican auto industry unions for 20 years, and there have been good relations between the oldest independent auto unions, SITIAVW of Puebla and SITNISSAN of Morelos, but until recently the conversations have included some CTM auto unions that were trying to legitimize themselves as relatively independent. The CTM unions have now dropped out of the conversations, and the truly independent and democratic unions are moving to formalize their alliance and found a legally recognized federation.

The addition of auto parts unions and rubber worker unions is an important move, since for every auto assembly worker it is estimated there are at least twice as many parts and component supplier workers.

The project is sponsored jointly by IndustriALL and IG Metall, and the project organizer is José Luis Rodríguez Salazar, a former president of SITIAVW. Find here a link to a recent IndustriALL article about the struggle of the union at Goodyear.

This is an incredibly important development in Mexican labor, as the auto, auto parts, tire and aerospace industries are one of the biggest, most important and most advanced industrial sectors of the Mexican economy. The leading role of SITIAVW in this is due to their long history of independence, democracy and militancy, earning them the best contracts in the industry and the respect of the entire labor movement. The project director is also widely respected, as he led SITIAVW through some of its most difficult struggles during the Vicente Fox sexenio (six-year term) and is the only SITIAVW president to have been re-elected and to serve more than one term.

Equally important in the leadership of this initiative are los Mineros, a powerful national miners union whose leader, Napoleón Gómez Urrutia broke with the corporativist labor movement (CTM, CROC, CROM, allied in the Congreso de Trabajo or Congress of Labor) fifteen years ago and embarked on militant organizing and collective bargaining campaigns, challenging the biggest, most powerful Mexican industrial conglomerate Grupo Mexico, expanding their jurisdiction to aerospace and auto parts, aiding progressive independent organizing projects like CAT-Puebla and CFO on the border.

Gómez Urrutia was falsely accused and threatened by the Mexican government and has been living in exile in Canada for over ten years, but has been elected Senator on the list of MORENA, the reform party whose presidential candidate Andrés Manuel López Obrador was just elected president. Gómez will return to Mexico to take his seat on September 1, giving the independent labor movement a powerful voice in the Senate. Los Mineros have an affiliation agreement with the United Steel Workers (USW), which represents workers in Canada and the United States.

This is happening at a time of historic change in Mexican politics, with the defeat of the presidential candidates of the PRI and PAN by López Obrador or AMLO, the founder and leader of MORENA, who was elected in a landslide. This could mean the reform of Mexico's labor laws. The independent labor movement is working to take advantage of this opportunity to become a leading force in Mexican society.

*Jeffery Hermanson has been a union organizer with ILGWU/UNITE, the Carpenters and the Writers Guild of America since 1977. He was the Field Representative in Mexico for the AFL-CIO Solidarity Center from 2000-2003 and currently works with the International Union Educational League.