Max Blumenthal and the Streisand Effect 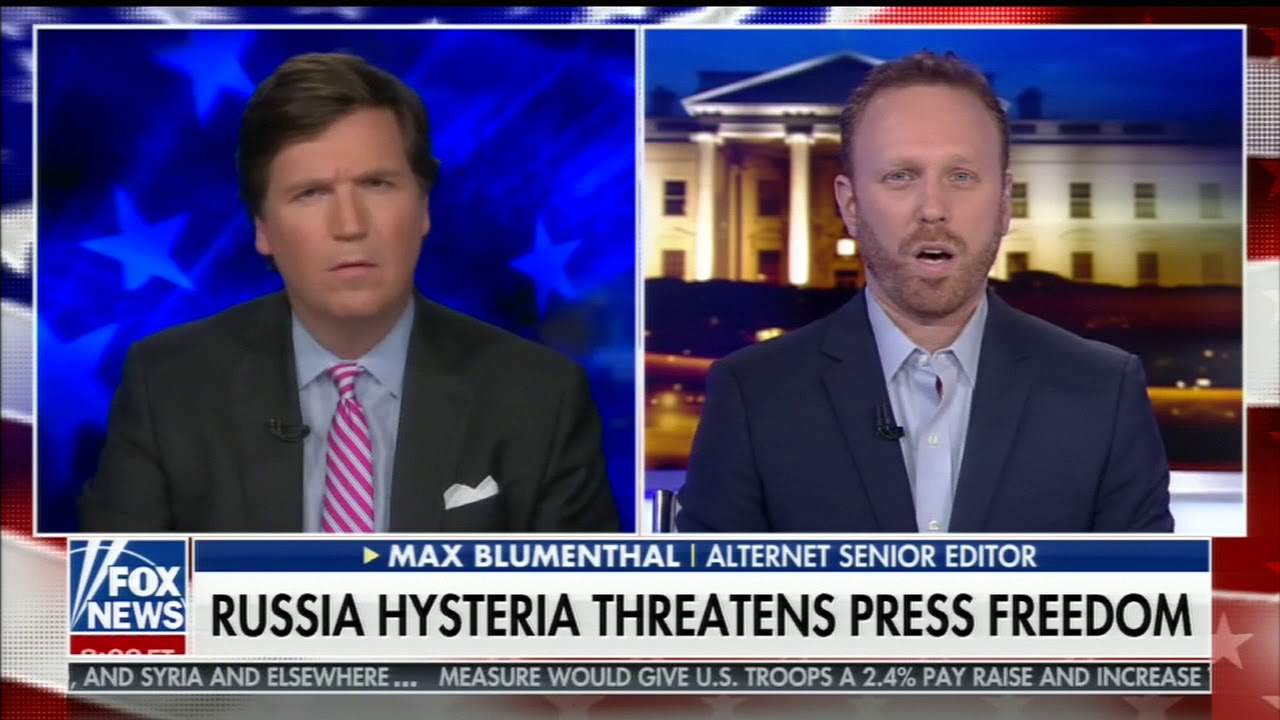 On the Southern Poverty Law Center website, this rather odd statement can be read:

Yesterday, Friday, March 9, we published an article entitled “The multipolar spin: how fascists operationalize left-wing resentment.” After receiving some concerns about the article from Max Blumenthal that evening, we took it down, pending further review.

The article was written by Alexander Reid Ross as a follow-up to earlier articles for SPLC titled “The Internet Research Agency: behind the shadowy network that meddled in the 2016 Elections” and “The far-right influence in pro-Kremlin media and political networks.”  Subsequent to the removal of the latest, the other two have been removed as well.

The three articles are all focused on the real problem we face from Putin, which is much less about the 2016 elections that Clinton was mostly responsible for subverting, than it is about his outreach to the American left. If our main goal is to overthrow American capitalism, how do we reconcile that with the growing ties between those viewing themselves as radicals and a regime that is promoting fascism everywhere in the world, including the USA.

Ross is not the only investigative reporter looking at these ties. In a book-length post on the Ravings of a Radical Vagabond blog titled “An Investigation Into Red-Brown Alliances: Third Positionism, Russia, Ukraine, Syria, And The Western Left,” you can discover the same kind of research that Ross credits in the deleted article that can still be read here. (Make sure to adjust the embedded links since they concatenate the web archive URL, where it is located, with the original URL’s.)

Despite the SPLC’s massive treasury based on donations made by wealthy liberals, I doubt that they will be publishing the article even after its dubious “review.” Most people surmise that Max Blumenthal, who is the main target of Ross’s article, has threatened legal action that we can assume his daddy Sidney will support. Sidney is not that rich (only $4 million according to some analysts) but his ties to American liberal elite circles would certainly make those same elites at SPLC think twice about antagonizing.

Since the purging of Ross’s article has touched a nerve, there is every possibility that more people are reading it than would have been the case if Max Blumenthal had simply ignored it. Someone described this as the Streisand Effect as Wikipedia described it:

The Streisand effect is the phenomenon whereby an attempt to hide, remove, or censor a piece of information has the unintended consequence of publicizing the information more widely, usually facilitated by the Internet. It is an example of psychological reactance, wherein once people are aware that some information is being kept from them, their motivation to access and spread it is increased.

It is named after American entertainer Barbra Streisand, whose 2003 attempt to suppress photographs of her residence in Malibu, California, inadvertently drew further public attention to it. Similar attempts have been made, for example, in cease-and-desist letters to suppress files, websites, and even numbers. Instead of being suppressed, the information receives extensive publicity and media extensions such as videos and spoof songs, often being widely mirrored on the Internet or distributed on file-sharing networks.

Why was Blumenthal so worked up about Ross’s piece?

In another Tweet, Blumenthal characterizes it as part of a new “red scare” and has referred to past articles tying him to the Kremlin’s propaganda offensives over Syria, Ukraine, etc. as “red-baiting.” McCarthyite, a red scare, red-baiting? People were red-baited in the 1950s because they signed a petition supporting the Spanish Republic in 1938 and even lost jobs. Meanwhile, people all across the political spectrum write articles in praise of Bashar al-Assad without consequence, from Stephen Kinzer in the Boston Globe to David Bromwich in the New York Review of Books. Does Bromwich have to worry about being fired from Yale because of this?

When a “red” supports war criminals like Putin and Assad, the only thing they have to fear is getting attacked by an anarchist like Alexander Reid Ross or a Marxist like me, something that poses no risk to their tawdry careers.  What rankles Blumenthal is being exposed as being on the same side of the barricades as Pamela Geller, David Duke and Richard Spencer – all of them Assad propagandists just like him. It is all driven by an Islamophobia that sees the clean-shaven Bashar al-Assad as the Middle East’s best hope.

You have to ask why Blumenthal gets the red carpet treatment on the Tucker Carlson show unlike other leftists who get baited mercilessly. What is going on? You can ask the same question about how Stephen F. Cohen became one of WABC radio show arch-conservative host John Batchelor’s favorites. The three most frequent guests on the Batchelor show are Cohen, Sebastian Gorka and Malcolm Hoenlein, the one-time executive vice chairman of the Conference of Presidents of Major American Jewish Organizations and about as rabid a Zionist you can find.

Perhaps the bigger question is whether there is anything particularly “red” about Blumenthal himself. The main topic Ross addresses in his purged article is the shared preference for a “multipolar” world by outright fascists like Aleksandr Dugin and people supposedly on the left like Blumenthal. In websites such as Global Research and Katehon, there is zero interest in world revolution. They are preoccupied with defending Russian and to some extent Chinese foreign policy because it reduces American power. In its most naked formulation, it devolves into a defense of the Russian takeover of Crimea because it had to protect strategic military interests on its border. Does that ring a bell? It should because that was the same excuse JFK made for the Cuban missile crisis. Indeed, even Noam Chomsky acknowledged Russia’s right to bully Ukraine on this basis.

Socialists, on the other hand, don’t approve of either JFK or Putin’s neocolonial trampling on the rights of weaker nations. People like Max Blumenthal have zero interest in socialism. Their opposition to imperialism is a reductionist one viewing any struggle against the USA as progressive, whether it is Fidel Castro standing up to JFK or Bashar al-Assad standing up to Barack Obama. Since Obama feared the Syrian rebels more than the Baathists, his “support” for the FSA consisted of light arms that could have easily been purchased on the black market (and was) but also positioning the CIA on the borders of Syria to make sure that anti-aircraft missiles did not reach the FSA. If the CIA had minded its own business, the war probably would have ended in 2014.