A Socialist Case Against Climate Geoengineering 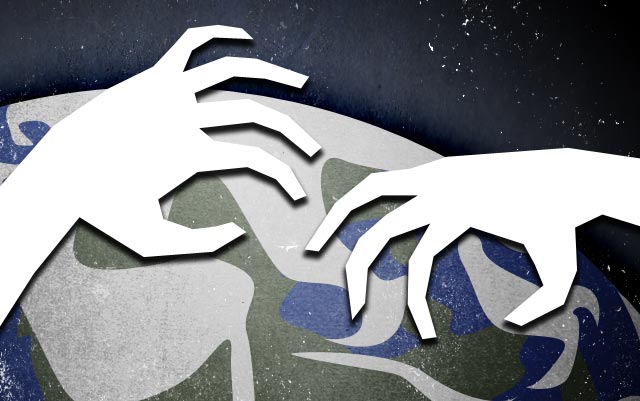 Since the 2015 UN Paris Agreement, climate geoengineering – the intentional large-scale manipulation of the earth’s natural systems – has shifted from the margins to the mainstream of climate policy discussions. The idea counts among its supporters both liberal technocrats and neoconservatives like U.S. Rep. Lamar Smith, a notorious climate denier who sees geoengineering as an alternative to “forcing unworkable and costly government mandates on the American people.”

Geoengineering has also found a supporter in Jacobin editorial board member Peter Frase. In an article from the “Earth, Wind, and Fire” issue, Frase raises the “prospect of geoengineering in a left context…as part of a larger portrait of eco-socialism” – calling on leftists to embrace geoengineering as part of a “realistic and appealing” vision of a better world in the future. Frase is correct to call for a vision of ecological reconstruction along socialist lines. But his notion that geoengineering would benefit society – or, more strangely, that support for geoengineering will win working-class people to the socialist project – is as politically naive as it is under-researched.

Far from bringing about an ecological transition, allowing the ruling class to gain control of the global thermostat would more likely result in new commodity frontiers and capitalist expansion, along with the development of new weapons to be used against opponents of empire – as the US attempted in Vietnam through weather modification. A review of the most prominent geoengineering technologies reveals that the impacts of deployment would disproportionately fall on peasant and poor communities in the Global South. Socialist support for geoengineering would be a striking reversal for a political tradition based on international solidarity with the oppressed and exploited.

Geoengineering is generally broken into two categories: technologies aiming to block or reflect sunlight, and those that would suck carbon out of the atmosphere.

Carbon dioxide removal builds on the neoliberal logic of carbon markets – mobilizing resources for projects intended to function as “carbon sinks”. Climate finance is already supporting monoculture tree plantations for carbon sequestration, which erode biodiversity and soil health, deplete groundwater, and incentivize land grabs. Other proposals range from dumping iron filings into the ocean to stimulate algae blooms, to carbon capture and storage projects like the Kemper County coal plant in Mississippi – a $7 billion boondoggle which soaked up over $1 billion in government and ratepayer funding before being forced to burn natural gas and abandon CCS.

The most prominent CDR technology is bioenergy with carbon capture and storage (BECCS) – an idea that is expected to be central to the Intergovernmental Panel on Climate Change’s special report on achieving 1.5°C due out shortly. In order for BECCS to achieve the emissions targets laid out in the Paris Agreement, 25 to 80 percent of total current global cropland, or up to eight percent of the earth’s land area, would need to be dedicated to bioenergy production.

BECCS faces potentially insurmountable hurdles to commercial-scale deployment. But even the hype alone is likely to generate speculative investment in arable land, accelerating a land grab that has led to the dispossession and proletarianization of peasant and Indigenous communities in South America, Africa, and Southeast Asia since the financial crisis of 2008. While organizations like the Landless Workers’ Movement (MST) in Brazil and COPINH in Honduras are leading courageous struggles for Indigenous land rights and popular agrarian reform, land defenders often face severe repression and criminalization. US and European leftists should be aiming to build links of solidarity with these movements, rather than providing support, if indirect, for the reactionary forces arrayed against them.

While liberals line up behind carbon markets and CDR, neoconservatives see solar radiation management as an opportunity to continue with capitalist business as usual, and if necessary, hire Halliburton to dim the sky.

In its most prominent form, SRM involves spraying sulfur into the upper atmosphere to shade out incoming sunlight – a practice that would have to be repeated indefinitely to avoid a catastrophic spike in global temperatures once the sulfur shade dissipated. Models predict that SRM deployment would alter global precipitation patterns, shifting monsoons critical to millions of people across Africa and South Asia or exacerbating drought in the Sahel region of Africa.

Geoengineering is currently prohibited under a de facto UN moratorium. But the possibility of unilateral action by the US or another superpower should compel leftists and all opponents of imperialism to fight for an immediate ban on solar radiation management, given the risks. Strengthening ties with movements fighting to defend territory from the carbon commodity frontier, on the other hand, will require rejecting mindless faith in technology with concrete strategy that recognizes peasants and landless rural workers as key players in an international anti-capitalist historic bloc.

Leftists should welcome the opportunity to debate real solutions to climate change. As Jacobin editor Alyssa Battistoni points out, “[c]limate change more than any other issue demonstrates the need for socialism. It points to the need for more democratic political control over industry, technology, and infrastructure; more conscious intention about how we build our world, why, and for whom.”

Climate geoengineering, on the other hand, is science-fiction fantasy bankrolled by the ruling class – a project to be roundly rejected by all those committed to social justice and a livable planet.

Keith Brunner is an organizer, researcher and member of the Vermont Workers’ Center living in Burlington, Vermont.

This article was originally posted on the Institute for Social Ecology website.