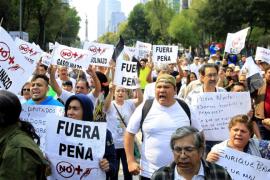 Tens of thousands in every state in Mexico have for the last week joined protests against President Enrique Peña Nieto’s government after it raised prices on gasoline by between 14 and 20 percent and electric rates by 4.5 percent.

The protests so far are not as well organized, as disciplined, or as large as the recent teachers’ strikes over the education reform law or the demonstrations in protest of the forced disappearance of 43 Ayotzinapa Teachers College students, but the demonstrations against the gasolinazo are national in scope and involve broader sectors of society.

The demonstrations will almost surely have an enormous impact on the country’s 2018 presidential elections, where Peña Nieto’s dominant Institutional Revolutionary Party seems doomed to suffer a serious defeat and Andrés Manuel López Obrador, populist candidate of the Movement of National Regeneration Party (MORENA) leads in the polls. The radical Zapatista Army of National Liberation (EZLN), has called for an indigenous woman candidate for president in 2018, though whether that is a propagandistic campaign or a serious electoral bid is not yet clear.

Throughout Mexico, shouting “Out with Peña!” protestors—truck drivers, taxi drivers, and public health workers prominent among them—seized PEMEX gas stations and other company facilities, blocked highways and commandeered toll stations, took over shopping centers and looted more than a thousand stores in various cities of millions of dollars of merchandise.

Thousands of police and soldiers have been mobilized to suppress the protests and looting, resulting in hundreds arrested, many injured, and several dead. The federal, state, and local police in many areas as well as the army have been repeatedly accused of human rights violations, as arrest in Mexico is generally accompanied by beating and torture. Those detained by police sometimes also disappear, not to be heard from again.

All of the opposition political parties—the conservative National Action Party (PAN), the center-left Party of the Democratic Revolution (PD), and the populist Movement of National Regeneration Party (MORENA)—have called upon the president to reverse the price increases. They have also come out to one degree or another in support of the citizens’ protests.

The opposition parties have been joined by the Mexican Catholic Bishop’s Council (CEM) and by the government controlled labor unions who also stand opposed. El Barzón, the national debtors’ union, and the Plan de Ayala coordinating committee, a peasant organization too came out against the price rises. The EZLN, the largely indigenous movement in the southernmost state of Chiapas called the gasolinazo “a catastrophe.”

All of the small far left parties—Trotskyist, Stalinist, Maoist—have not only opposed the prices increase, and supported protests, but have also issued calls for action of various sorts, though their reach is not very great.

Some citizens took their petition to stop the price increases to the Mexican Supreme Court, arguing that they violate the Constitution, since they worsen people’s lives. With 52 percent of Mexicans living in poverty, the government’s price rises threaten to make millions even more miserable, but the precarious middle class is also affected by these policies.

President Enrique Peña Nieto took advantage of his New Year speech to defend the increase in petroleum prices arguing that had the prices not been raised it would have been necessary to cut the budget for social programs for the poor, for example, health programs such as surgeries. His party, the PRI, and its allies the Green Party and the New Party of the teachers union refused the demand of the opposition parties to hold an extraordinary session of the Congress to consider the price increase.

President Felipe Calderón—discredited for initiating the drug war that has taken the lives of over 200,000 Mexicans, led to as many as 50,000 forced kidnappings, and killed some 80,000 Central Americans passing through Mexico—did not defend the price increase (a practice which he had also engaged in) but attributed the protests to “anarchists, moochers, and common criminals.”

Where Do Things Go From Here

If these protests had a centralized organization, they would verge on a national rebellion, but Mexico has no political party or organize labor movement prepared to give leadership. The Party of the Democratic Revolution (PRD) long ago became a corrupt, capitalist party like the PRI and the PAN.

López Obrador of MORENA, who has recently veered further to the right, may put himself forward as a leader of the protests, as he attempted to do with the teachers’ protests against the education reform and the widespread demonstrations against the forced disappearance of the Ayotzinapa students, but if so, he will attempt be restrain the movement and redirect it to his presidential campaign.

The EZLN, while it joined in the condemnation of the gasolinazo as a catastrophe, has in the past taken a sectarian attitude generally refusing to join in alliance with both political parties and other social movements or left organizations—except on its own terms.

Perhaps this latest upheaval can create the long awaited left political organization that both expresses the movement and has the authority to lead it. We will see.

Posted January 6, 2017 Mexico, Social protests by Dan La Botz
About Author
DAN LA BOTZ is a Brooklyn-based teacher, writer and activist. He is a co-editor of New Politics.