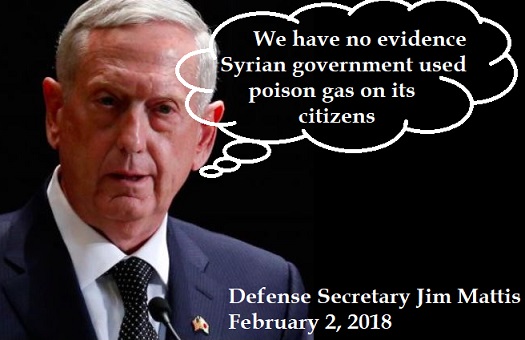 A recent story provides almost a litmus test separating serious commentators from the propagandists and the dupes.

There have been various credible allegations of chlorine gas attacks by the Syrian government on rebel areas since the beginning of the year. There have also been some allegations that the Assad government has recently been using not just chlorine gas on civilian populations, but sarin. Military use of either chemical is a war crime and a violation of the chemical weapons convention, but because chlorine has commercial uses as well its mere possession is not illegal. On the other hand, manufacture, stockpiling, or possession of the far deadlier sarin is banned outright.

At a press conference on Feb. 2, Defense Secretary James Mattis was asked about the reports of recent chlorine and sarin use. He replied that chlorine has been used several times, but that the sarin reports are being examined but have not yet been confirmed or disconfirmed by the United States

He noted that the commitment Assad gave during the Obama administration to destroy his chemical weapons stockpile “after they had been caught using it” had been reneged upon, as demonstrated by the fact that sarin had been used during the Trump administration:

we think that they did not carry out what they said they would do back when — in the previous administration, when they were caught using it. Obviously they didn’t, cause they used it again during our administration.

Assad’s record of “deceit and denial” regarding his past chemical weapons use, said Mattis, gives us reason to suspect him now. So having gotten various reports of current poison gas use by Assad, we’re looking at the evidence.

Mattis warned that the United States was concerned about possible sarin use, and that “we are on the record, and you all have seen how we reacted to that, so they’d be ill-advised to go back to violating the chemical convention.”

The day before, “a senior U.S. official” had stated that President Donald Trump "hasn't excluded anything" in the bid to halt chemical weapons use. "Using military force is something that is still considered."

At Mattis’s press conference, reporters went on to ask him if the U.S. was looking into both chlorine and sarin use, to which the defense secretary replied that he believed chlorine had been used repeatedly, but as to whether both had been used:

What I’m saying is that other — that groups on the ground, NGOs, fighters on the ground have said that sarin has been used. So we are looking for evidence. I don’t have evidence, credible or uncredible.

All of this seems pretty straightforward. Numerous news reports of the Mattis press conference made clear that Assad was being warned not to use chemical weapons “again,” that Washington had no evidence Syria had used sarin “recently.” An AP story by Robert Burns, however, lacked clarity, though if one read it carefully, it’s statement that Mattis “alluded to the April [2017 U.S.] attack [on the Syrian airbase], saying, ‘So they’d be ill-advised to go back to violating’ the international prohibition on the use of chemical weapons” – showed that Mattis believed there was previous sarin use. (Burns’s confusing story was picked up by the New York Times, the Washington Post, and others.)

So those intent on falsification could quote Mattis’s “I don’t have evidence” and try to pass it off as a comment on what happened in 2013 or 2017.

And so, sure enough, Russia’s RT, a site considered by some on the left as a worthy source of alternative news to counter the mainstream media, ran a story that began this way:

Washington has no evidence that the chemical agent sarin has ever been used by the Syrian government, Pentagon chief James Mattis has admitted. It did not stop him from still being concerned about Assad, though.

"We do not have evidence of it,” the US Defense Secretary told journalists, referring to the alleged use of sarin nerve agent by Syrian government forces. He said the only information the US has been able to obtain so far, comes from “other groups on the ground, NGOs, fighters on the ground” and just “people who claim it’s been used.”

The Duran, a rightwing news site, headlined their story, based on Mattis’s press conference:

Zero Hedge (the pseudonymous Tyler Durdin) wrote an article. re-posted on the MintPress site (famous for its sarin-denialism), that began:

Secretary of Defense James Mattis stated on or about February 2nd, 2018 that the United States has “no evidence” that the Syrian government used the banned nerve agent Sarin against its own people in attacks in 2013 and 2017.

(Zero Hedge is so lazy he didn't even bother to check the date of Mattis's press conference.)

And then on Feb. 8, Newsweek ran an op-ed – not a news story, but a reader-submitted opinion piece – titled “Now Mattis Admits There Was No Evidence Assad Used Poison Gas On His People.” (Notice the use of the past tense: there was no evidence.) The author, Ian Wilkie, wrote that at his press conference:

Mattis offered no temporal qualifications, which means that both the 2017 event in Khan Sheikhoun and the 2013 tragedy in Ghouta are unsolved cases in the eyes of the Defense Department and Defense Intelligence Agency.

But of course, the temporal coverage of Mattis’s comments are evident to anyone who actually looked at the transcript.

Wilkie (identified as “an international lawyer, U.S. Army veteran and former intelligence community contractor”) goes on to repeat a host of Syrian regime talking points, drawing on Seymour Hersh, Ted Postol, and Gareth Porter – whose arguments are mutually contradictory and have been well refuted previously, and now again by Eliot Higgins and Scott Lucas. One could argue those points, but given how Wilkins so distorted Mattis’s press conference remarks, he cannot be taken as a remotely serious source, and anyone citing him would have to be gullible or dishonest.

Wilkie’s piece was reprinted on the Information Clearing House website. It was on Antiwar.com’s list of linked viewpoints. A large chunk of Wilkie’s article was reprinted in a post by Brandon Turbeville on Activist Post.

So too did Vanessa Beeley.

Gareth Porter (who claimed in a report for Alternet’s Grayzone Project that rebels injected people with drugs that mimicked the symptoms of sarin) tweeted Wilkie’s article, writing:

.@Newsweek, which always reflects the official line on anything involving U.S. adversaries, has published an opinion piece questioning the alleged evidence of a sarin attack at Khan Sheikhoun. Kudos 2 Ian Wilkie (@Wilkmaster) for what seemed as impossible as water running uphill. https://t.co/8aMj7aQfEw

After the evidence that Wilkie had falsely characterized Mattis's remarks was pointed out, Porter published a retraction – of sorts.

Although @Wilkmaster's op-ed in @Newsweek is a small victory for dissent, it's too early to celebrate Mattis statement that "we do not have evidence" use of sarin gas. It was apparently related to recent claims, although he was unclear about which ones. https://t.co/gX5LFWK0c4

Sharmine Narwani, another favorite of the Assad-didn’t-do-it crowd, also posted the Wilkie piece on her Facebook page, though she later discretely removed it, without explanation, so she didn’t have to face up to promoting a palpably false story. 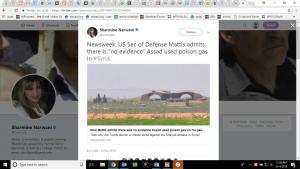 Comedian and political commentator Jimmy Dore, another apologist for Assad, had a field day with the Wilkie story.

Dore, by the way, is one of many who don’t just cite Wilkie’s bogus claim, but refer to it, or make it seem, as if it were a news report from Newsweek rather than a reader-submitted commentary. (This is like saying that, according to the New York Times, “The global economy is not working for the majority of people in our country and the world.” – when in fact the words come from an op-ed by Bernie Sanders published in the Times.)

Ben Norton tweeted the AP story, with its misleading headline, with no attempt to clarify what it meant.

Defense Secretary Mattis admitted the US has no evidence that the Syrian government used sarin gas. https://t.co/coPyLKwart

Norton cleverly even tweeted an out-of-context excerpt from the transcript of Mattis’s press conference, either never bothering to read the whole thing or hoping that his twitter followers wouldn't bother.

Pentagon transcript of the press briefing in which US Defense Secretary Mattis admitted, "We do not have evidence of" the Syrian government using sarin gas.

"We are looking for evidence," Mattis said. "I don't have evidence, credible or uncredible."https://t.co/0Zqn8JkmTb

On February 9, Carl Davidson, who seldom comments on these issues, also bought into the pro-Assad propaganda. He linked Wilkie’s piece on his Facebook page and commented:

FROM REAL NEWS TO FAKE NEWS…Here's an example of why we have to be critical and skeptical of 'offical' new [sic], listen to the other side, and study a variety of sources

Stephen R. Shalom is on the editorial board of New Politics.

Posted February 17, 2018 Left Politics, Syria, War and peace by newpolitics
About Author
STEPHEN R. SHALOM is on the editorial board of New Politics.

3 comments on “A Litmus Test for Detecting Syria Trolls”