Read more ›
On the 150th Anniversary of Marx’s Das Kapital

Exploitation and Modes of Production

The mode-of-production concept that Marx develops in Capital (although the idea is present earlier) is the essential methodological tool for understanding history, different societies, and the possibilities for social change.

The Misrule of Global Capitalism

Social Inequality is not for the faint-hearted. It covers the major political-economic issues of our time, from the structural changes in the economics of capitalism, to class structure, the imperialist state, and the distortions of capitalist culture. The author, a veteran scholar-activist of the New Left generation who now lives in Costa Rica,1 ends with a plea for resistance to our oligarchic “hegemon” and suggests a series of tactics to help us on the road.

Keynes, the Rabble, and Revolution

IN 1942 British economist John Maynard Keynes got an advance preview of Lord William Beveridge’s report, Social Insurance and Allied Services. In it, Beveridge proposed a comprehensive system of social security that ran the gamut from full employment to national health care so as to eliminate “Want, Disease, Ignorance, Squalor, and Idleness” from the United Kingdom.

Trump and the Labor Movement

We working people live in darkening times. When the Trump presidency ends in four years—if it does—we may no longer have an organized labor movement. As one of my colleagues, Ed Ott of the Murphy Institute, the City University of New York’s labor school, said to me, “We are at the beginning of the end of the U.S. labor movement based on a partnership with capital.” We are at the twilight of an era. Labor unions and collective bargaining stand to be swept away, and with them the institutions that have sheltered us in the workplace and provided us with a modicum of job security, living wages, health insurance, and pension benefits.

Fighting for the Soul of Socialism

After a huge bump in membership thanks to Bernie Sanders, and an even bigger one thanks to Donald Trump, the DSA continues to grow. Since its national convention in August, membership has increased from 25,000 to 30,000. We have known since 2011 that millennials have a more positive association with the word “socialism” than the word “capitalism”;1 Sanders gave this demographic shift from the cold war era a political expression, and DSA has given it an organizational expression. Now thousands on the left are scrambling to answer the question, “What do we do with this newfound energy?”

Socialists, Democrats, the Working Class, and Our Future 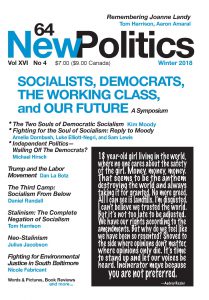 From the Editors
Symposium: Socialists, Democrats, the Working Class, and our Future