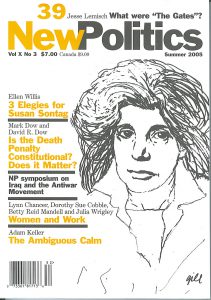 The Ambiguous Calm: What is Sharon up to, and can he really get away with it?, Adam Keller
New Politics Symposium on Iraq and the Antiwar Movement

The Resistance and the Antiwar Movement, Anthony Arnove

END_OF_DOCUMENT_TOKEN_TO_BE_REPLACED

Special Section on Women and Work

Symposium on Iraq and the Antiwar Movement

We are pleased to publish the following exchange on the politics of the U.S. occupation, the Iraqi resistance, and the antiwar movement. The symposium builds on a trio of articles — by Barry Finger, Wadood Hamad, and Glenn Perusek — that appeared in New Politics 38 (Winter 2005).

Relevant, Irrelevant, or Both?

While I was in the process of reviewing this volume, I took it to a party in Brooklyn attended by varied-and-sundry aging baby boomers, early 40s through 50-something types who are generally progressive, educated and (in tripartite terms of classification) middle-to-upper-middle class.

In their edited collection, Global Woman: Nannies, Maids, and Sex Workers in the New Economy, Barbara Ehrenreich and Arlie Hochschild write that Third World women are on the move as never before, filling jobs in the "homes, nurseries, and brothels of the First World" (2002). The rushed and materialistic societies of the First World leave working parents little time to look after their children or their own parents. Women migrating from poor countries fill the gap.

The Labor Origins of the Next Women's Movement

Dorothy Sue Cobble's book, The Other Women's Movement: Workplace Justice and Social Rights in Modern America (Princeton University Press, 2002), retrieves the forgotten feminism of the previous generation of working women. Their reform agenda — an end to unfair sex discrimination, just compensation for their waged labor, and the rights of their families and communities — launched a revolution in employment practices that has carried over into the present.

The First Neoconservative: Herman Wouk, the Americanization of the Holocaust, and the Rise of Neoconservatism

The justification of the intensive bombing of Serbia in 1999 as part of the need to avoid "another Holocaust" is only a recent event in the Americanization of the Nazi Holocaust: specifically its use as a propaganda theme for the defense of U.S. great power interests.

We are pleased to publish the following exchange on the politics of the U.S. occupation, the Iraqi resistance, and the antiwar movement. The symposium builds on a trio of articles — by Barry Finger, Wadood Hamad, and Glenn Perusek — that appeared in New Politics 38 (Winter 2005). Further responses from our readers are welcome.

Struggling for Progress, in Iraq!

The current armed insurgency in Iraq, erroneously portrayed by some as "resistance" to U.S. occupation, does not — nor could it ever — represent a national resistance movement. While it is true that the medley of insurgents espouses "a mixture of Islamic and Pan-Arab ideas," it is inaccurate to insinuate that they "agree on the need to put an end to U.S. presence in Iraq."[1] For if this were true, why are those elements not fighting U.S.

The Resistance and the Antiwar Movement

The key challenge for the left today remains that of ending the occupation of Iraq, which did not end with the January 30 elections. A majority of people in the United States now thinks the invasion of Iraq was not worth the high price that has been paid as a consequence. Yet an enormous gap exists between this sentiment and the level of political activity against the occupation.