Institutional Obstacles Can be Overcome 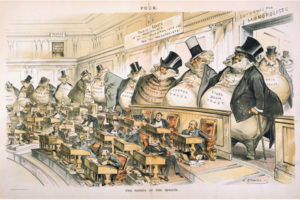 This essay is a reply to “Problems with an Electoral Road to Socialism in the United States,” published in the Winter 2020 issue of New Politics. – Editors

Thanks to Kit and Mel for this engaging essay.

A response to “Problems with an Electoral Road to Socialism in the United States” by Kit Wainer and Mel Bienenfeld in the Winter 2020 issue of  New Politics.

I think the issue of an “electoral road to Socialism in the United States should be reformulated into two somewhat different questions:

I believe that the answer to the first question is a cautious and qualified “yes,” and to the second question is uncertain, but very dubious.

I’m not ready to offer a complete argument on these questions, but I want to raise some questions about what I think is Kit’s and Mel’s overly pessimistic assessment of the possibilities for radical change posed by the existing constitutional structure.

Kit and Mel say that for a working class movement to enact major reforms “would require not just a single victory in federal elections but a series of consecutive victories in both branches,” implying that this would be impossible or nearly so. Yet pro-reform forces have done so at two critical junctures in U.S. history.

The first was Reconstruction, when Radical Republicans won three consecutive national elections (in 1864, 1866 and 1868), winning two-thirds majorities in the House each time, and making  corresponding gains in the Senate (by 1868, when one might assume that the reform wave would have begun to ebb, the Republicans held an incredible 57 to 9 majority in the Senate).  The Radical Republican performance was so powerful that it allowed them to overturn Andrew Johnson’s white supremacist Reconstruction plan, impeach him, institute their own plan, bar Johnson’s supporters from taking their seats in Congress, and force ratification of the 14th Amendment.  (While Johnson was acquitted by one vote in the impeachment trial, he was finished as a political force).

They also raise the question of obstruction by the courts. It is true that the Supreme Court did overturn New Deal measures early on, and conventional wisdom holds that FDR’s attempt to “pack” the Supreme Court was a severe defeat. But that’s not really what happened. The “court packing” plan was introduced in Congress February 5, 1937; on April 12, 1937, the Supreme Court completely reversed its direction, upheld the Wagner Act in NLRB vs Jones & Laughlin Steel Corp., and continued to uphold New Deal legislation thereafter.  While Roosevelt did not increase the size of the Court, the personnel of the Supreme Court was almost completely replaced (due to retirements, deaths etc.) by 1941.

It’s also important to bear in mind that electoral victories can reflect events outside the electoral realm. For example, the Republican victory in the 1864 election owed much to the Union Army’s defeat of Confederate forces and capture of Atlanta that summer. And the 1866 Republican victory followed outbreaks of racist violence in Memphis and New Orleans that aroused anger in the North.

Similarly, the Supreme Court’s willingness to reverse course in 1937 and approve New Deal legislation may well have been influenced by the UAW’s victory in the Flint sit-down strike just a few months earlier after a struggle that appeared to pose a threat to capitalist private property.

I think these examples indicate that a working class based popular movement for reform might well be able to brush aside institutional barriers, even those that seem set in constitutional stone.  What would be required would be resolute and determined leadership, grounded in a strong mass base. Reconstruction faltered and ultimately collapsed not because legal obstacles couldn’t be overcome, but because the Republican Party began to fragment politically by 1868 or so, and the movement as a whole was not able to overcome its internalized racism.

Mel and Kit also argue that the Tenth Amendment to the Constitution gives states “power over trade and economic regulation within state boundaries.” That may be true, and yet the Federal government has very broad control over the domestic economy under the Interstate Commerce clause, the Federal Reserve system, taxing powers, etc.

Donna Cartwright is a longtime rank and file labor activist.