In early February, the RCMP, Canada’s colonial police force, raided the land defender camps of the Wet’suwet’en people in British Columbia, in order to clear the way for pipeline construction. Clearly, none of the political decision makers responsible for this repressive action ever imagined that it would spark a powerful wave of solidarity actions across Canada. There have been ongoing protests and rallies but the focus has been on the tactic of economic disruption, most notably by blockading the railway network. If the attack on the Wet’suwet’en was driven by the profit needs of extractive capitalism, the resistance that has emerged has targeted the flow of goods and services as the most effective form of counter-attack. 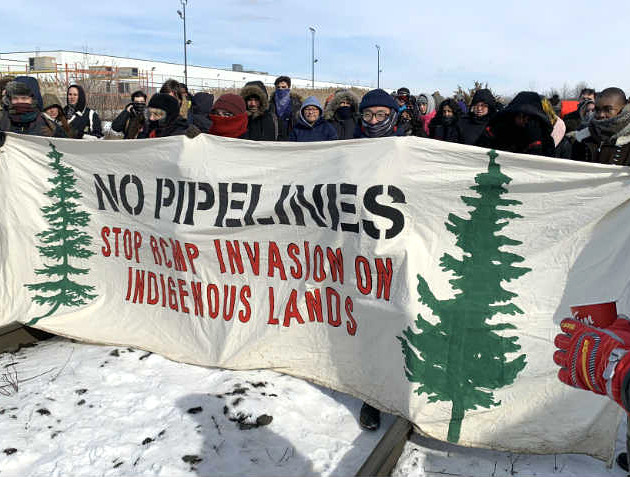 In October of 2018, the provincial government of British Columbia approved the building of a 670 km pipeline to bring liquified natural gas from northern BC to a $40-billion export plant, to be constructed in Kitimat. In BC, the New Democratic Party (NDP) is in power, so it was shameful that Canada’s social democratic party would join with the federal Liberals to provide “a bouquet of government subsidies for BC’s largest carbon polluter.”

From the outset, it was clear that there would be a major problem with driving this environmentally destructive project through Indigenous territory. Unlike the rest of Canada, BC has been built up on disputed or ‘unceded’ land over which no treaties between the Crown and the Indigenous nations were ever drawn up. This is because the process of colonization in BC was especially ruthless and lethal. In 1862, when a smallpox epidemic broke out in Victoria, infected Indigenous people were driven back into the interior of the province, spreading the disease. At least 30,000 died as a result, which was about 60% of the Indigenous population at the time. Following this successful genocide, treaties seemed unnecessary to the colonizers. “The Indians have really no rights to the lands they claim,” concluded land commissioner, Joseph Trutch, in 1864.

Trutch and his friends would doubtless be chagrined to learn that, in the 21st Century, an unintended legacy of their handiwork has emerged. The Wet’suwet’en Nation lays claim to a 22,000 square kilometre unceded territory through which the Coastal GasLink project must pass. Moreover, almost twenty five years ago, in the Delgamuukw ruling, the Supreme Court of Canada held that there is, indeed, Aboriginal title over such land. Coastal GasLink and its apologists make much of the fact that they were able to coerce and cajole twenty Indigenous band councils into signing agreements with them. However, these bands only have authority, under the Indian Act, over the reserves they operate. They have no jurisdiction over Wet’suwet’en land as a whole, whereas the hereditary chiefs of the Nation have a claim that predates Canada and that various court rulings have acknowledged is still highly relevant.

The hereditary chiefs remain implacably opposed to the pipeline project and neither the Trudeau Liberals in Ottawa, the BC government or the pipeline company have the “free, prior and informed consent” that is required under the UN Declaration on the Rights of Indigenous Peoples that Canada has signed onto.

The brutal arrogance with which the RCMP were unleashed on the land defenders was so shocking and appalling that it blew up in the faces of those responsible. After a previous assault on the Wet’suwet’en, in January of last year, it was discovered that RCMP planners were ready to shoot to kill. The notes of their meeting included an observation that “lethal overwatch is req’d.,” a reference to the deployment of snipers. After this last raid, a video emerged of a cop training his telescopic sights on the unarmed defenders. The footage and accounts of the militarized police action against people trying to protect their own ancient land was as heartbreaking as it was enraging.

“This is Wet’suwet’en territory. We are unarmed. We are peaceful. You are invaders,” yelled Eve Saint, the daughter of one of the hereditary chiefs. She later told the media that, “I held my feather up and cried because I was getting ripped off my territory and there was nothing I could do about it. That’s the type of violence our people face. It’s embedded in my DNA and hit me in the heart. This is what my people have been going through since contact (with colonizers).”

This ugly use of state power was made all the more vile and disgusting by Justin Trudeau’s hypocrisy. He is fully implicated in the attempt to crush Indigenous rights yet he postures as a champion of ‘reconciliation.’ The response was remarkable and powerful and created a political crisis, as hard-hitting actions took place across the country. BC’s NDP Premier, John Horgan, has been left ‘despondent’ by a solidarity action that disrupted his government’s throne speech. A day of action targeted BC government offices across the province. The Port of Vancouver has been blockaded. On the other side of the country, in Halifax, the Ceres container terminal was blocked by protesters chanting, “Where are we? Mi’kmaqi! Respect Indigenous sovereignty!” as well as, “Shut down Canada!”

It is, however, the rail blockades that have had such a huge economic impact and that have taken things to the level of political crisis. Action taken by residents of the Tyendinaga Mohawk Territory in eastern Ontario has prevented the movement of train traffic along a vital corridor connecting Toronto with Ottawa and Montreal for almost two weeks now and has had a national impact. The Mohawks have refused to obey a court injunction ordering them to leave on the grounds that Canadian courts have no right to tell them what to do on their land and they have made clear that they are going nowhere until the just demands of the Wet’suwet’en have been met. The economic impact of their action, along with a series of other rail blockades across Canada, has been enormous and it is growing. It is reported that “wood, pulp and paper producers have lost tens of millions of dollars so far.” At least 66 cargo ships have been unable to unload in BC and the president of the province’s Chamber of Shipping says, “those line-ups are only going to increase, of course ships are continuing to arrive. Eventually, there will be no space and they’ll be waiting off the coast of Canada, which is a situation we’d like to avoid.”

The federal Indigenous Services Minister, Marc Miller, has now been to Tyendinaga to meet with members of the community. His account of the hours long meeting doesn’t suggest much was resolved at all. Clearly, the Trudeau government is in a very difficult situation. They have seen the response to the RCMP raid on the Wet’suwet’en and they desperately fear the consequences of moving on the rail blockades. Yet the driving of pipelines through Indigenous territory is vital to their strategic priority of exporting dirty oil and gas to the Pacific market. The Coastal GasLink project is the harbinger of much more to come and the resistance of Indigenous people and their allies poses a threat to all their plans.

The considerable ability of the Liberal Party to serve the interests of the capitalists while containing social resistance is being tested to the limit. The vulnerability to disruption of the global supply chain that has been created during the neoliberal era, with its wide ranging sources of raw materials and component parts and its systems of ‘just in time’ inventory, makes the blockades and the economic disruption even more of a threat than they would have been at an earlier time.

The political crisis that has been unleashed by this wave of action in solidarity with the Wet’suwet’en is already very serious but if state power is unleashed to remove the blockades, at Tyendinaga or at other locations, especially if a serious confrontation ensues, the mood across the country is such that disruptive actions could intensify dramatically. In that eventuality, the choice for Trudeau and his provincial allies would be between a dangerous escalation or a retreat on so fundamental an objective as the pursuit of environmentally disastrous extractive capitalism. Sparked by the magnificent defiance of the Wet’suwet’en, a struggle is unfolding with the most important implications for the building of resistance in Canada to the colonial project that Indigenous people face. At the same time, however, it is also creating a precious model for the global struggle against the deadly consequences of corporate climate vandalism.

Posted February 21, 2020 Canada, Ecology, Human rights, Indigenous peoples, Social protests by Dan Fischer
About Author
John Clarke is a writer and retired organizer for the Ontario Coalition Against Poverty (OCAP). Follow his tweets at @JohnOCAP and blog at johnclarkeblog.com.