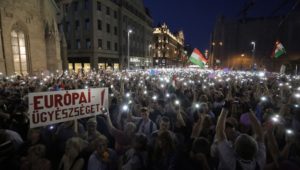 Widespread protests in Hungary, against the right-wing, authoritarian and nationalist government of Viktor Orbán, which began in December 2018, continue at the time of writing, though on a reduced scale. The trigger issue was the “slave law”, new legislation permitting employers to ask their workers for 400 hours overtime in a year (up from 250 hours), and moreover allowing this work to be paid up to three years in arrears. The overtime is not compulsory under the law, but workers fear victimisation by their bosses if they refuse.

More generally, the protests have challenged the encroaching control by Orbán and his Fidesz party over the judiciary, the news media and the universities.

Involved in the protests are the Hungarian Trade Union Confederation (MASZSZ) and opposition political parties – and therein lies a huge problem and contradiction. Jobbik (Movement for a Better Hungary), which came second in the general election of April 2018 taking 23 percent of the vote, is a party with a far-right, even fascist pedigree, though it is now projecting a more moderate image. The Hungarian Socialist Party (MSZP) is actually a liberal, pro-European Union party with a record of support for privatisation and free market policies.

In late January, workers at the Audi Hungaria motor factory in Győr held a very successful strike that halted production, not only at the Hungaria plant itself, but also at Audi’s plant in Ingolstadt, Bavaria, which assembles cars with engines made in Győr. Audi gave in to the union’s demand for an 18 percent wage rise, a big step towards the longer-term goal of closing the earnings gap with Audi workers in Slovakia and Poland, where wages are 29 and 39 percent higher than the pre-strike rate at Audi Hungaria. This is a wage dispute with the company, not directly part of the anti-government protests. Still, it signifies growing confidence and militancy on the part of the workers.

By some measures, Hungary’s economy is performing well. Annual growth in GDP is currently above 4 percent, while unemployment has fallen to 3.6 percent, from 11 percent in 2010. However, wages are low, which is one reason why many Hungarians have gone abroad to find better paid work. 600,000 Hungarians, or 9 percent of the working-age population, work outside the country. Orbán’s drive to increase working hours is an attempt to solve what is, from the point of view of capitalist employers, a labour shortage, without relaxing his anti-immigration policy.

Viktor Orbán first made his mark in 1989, at a ceremony for the reburial of Imre Nagy and other leaders, executed after the suppression of the Revolution of 1956. Orbán used the occasion to call for the withdrawal of Russian troops and for free elections. It was a brave speech – one that echoed the initial demands of 1956. Both demands were fulfilled within a year. Originally, his Fidesz was a liberal youth party, but over the years it shifted to the right. By the mid-1990s, he envisaged it as “a modern conservative party”, after the manner of Helmut Kohl’s Christian Democrats in Germany. Since then, Orbán and Fidesz have moved much further to the right.

Orbán’s ideology of “Illiberal Democracy” upholds the nation-state against multinational organisations such as the European Union on the one hand, and individual human rights on the other. It fiercely opposes immigration and multiculturalism. It stresses Hungary’s “Christian identity”, but this is an instrumental version of Christianity in the service of the nation-state, with scant regard for humility or compassion. The notion of “Christian identity” serves also to exclude Muslims as “other”. “Illiberal democracy” extols the traditional family, because the chief purpose of sexuality is to procreate future generations of Magyars. In 2017, Orbán invited the International Organization of the Family, which campaigns against LGBTQ rights, to hold its gathering in Budapest. In 2018, he banned gender studies in Hungary’s universities.

Hungary under Orbán remains a bourgeois democracy, in that opposition parties and trade unions operate freely. However, the government has systematically extended its control over the news media, and the country is saturated by its propaganda.

While Orbán closed his country to real refugees from Syria and elsewhere – he had fences built along the borders with Serbia and Croatia to keep them out – he has declared a welcome for racist “refugees” from more multicultural countries in Europe. In foreign policy, he has called for an “anti-immigration axis” within the European Union, including Italy and Poland alongside Hungary. (The use of the word “axis” has sinister resonances, particularly in Hungary, a country that allied with Nazi Germany in the Second World War).

“Illiberal democracy” includes at least an undertone of antisemitism. Orbán has praised Miklos Horthy, Regent of Hungary from 1920 to 1944, as a great statesman – despite Horthy’s involvement in the mass deportation of Jews to the Nazi death camps. In December 2018, the business magazine Figyelő published a cover showing Andras Heisler, president of the Hungarian Jewish Federation, amid a shower of banknotes. The magazine alleged that Heisler was involved in financial mismanagement. Whether the allegations are true or false, corruption is widespread in Orbán’s Hungary, and Heisler was singled out and depicted in an antisemitic manner.

After graduating from university in 1987, the young Viktor Orbán worked part-time for George Soros’s Open Society Foundation. In 1989, he went to Oxford University on a Soros scholarship – returning to Hungary for the end of the state-capitalist single-party state system that went by the name of socialism. Today, Soros has a starring role in Orbán’s ideology as the arch-enemy and hidden hand behind the protests. One government mouthpiece said: “These protests are being organised with George Soros’s money, so that they can turn Hungary into an immigrant country”.  In the words of one protester: “Personally I don’t care about George Soros… but I hate that some people believe that Soros is the only reason for our problems”.

In 2017, the statue of Marxist philosopher György Lukács (1890 – 1971) was removed from St Stephen’s Park in Budapest. This was followed by the closure of the Lukács Archives – in the face of widespread protests in Hungary and internationally. This is all part of the drive to impose ideological conformity on Hungary.

The wheel of history may be turning. Viktor Orbán, who once spoke out against a waning dictatorship, now finds his own grip on power shaken by protests from below.

Posted March 4, 2019 Hungary, Social protests by newpolitics
About Author
Richard Abernethy was born in South Shields in the North-East of England in 1953. After six years as a postal worker, he has spent most of his working life as a software developer. He has identified as a socialist since about 1968 and as a Marxist-Humanist since 1978. He is an active member of Unite the Union. He has written for News & Letters (1978-2008), The Hobgoblin (1999-2011) and The International Marxist-Humanist (since 2009).