Hands Off Venezuela! For Socialist Democracy! 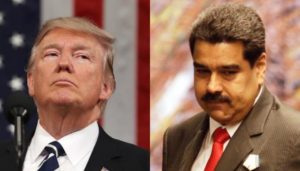 The foul, brutal hands of U.S. imperialism and its allies are tightening around Venezuela, and there is a strong possibility that a far-right takeover will occur in the near future.  This would extinguish the last vestiges of the left-of-center Pink Tide in South America. If this occurs, an entire region, from Argentina to Brazil to Venezuela, would be in the hands of the far right in a manner not seen since the military coups of the 1960s and 1970s that produced a Southern Cone of torture and murder. While the situation today is different, it is virtually certain that a brutal crackdown on left-wing and labor movements, as well as on indigenous communities, would follow the overthrow of Venezuela’s Maduro government. This would especially be the case if there is armed resistance, which there is very likely to be, since while Maduro’s authoritarian policies and the economic collapse have alienated many working people, even low estimates suggest the government retains about 20% popular support.

The sanctions imposed by the Trump administration in January are the severest ever used against another country, way beyond those on Iran or North Korea, but in keeping with the longstanding U.S. imperial attitude of “ownership” toward Latin America.  The sanctions threaten to literally shut down Venezuela’s oil exports, its economic lifeline. It is expected that the Venezuelan economy will contract a further 25% in the next 90 days as a result of the U.S. sanctions.

It is true that the opposition movement is massive. But in a move reminiscent of the old gunboat diplomacy, its new leader, Juan Guaido, has been officially recognized as the legitimate president by the US, Western Europe, and some Latin American governments.  However, just because a movement is massive and includes some working people does not it itself prove that it is democratic or revolutionary. Consider its political agenda, both open and secret.  Openly, Guaido talks democracy, but appears alongside Vice President Mike Pence of the far-right Trump administration. But behind his youthful visage lurks not only the ill-concealed interests of U.S. imperialism, but also the shadow of Leopoldo Lopez, the founder of Guaido’s party and the one surely pulling the strings today from house arrest. Lopez is the most right-wing leader of an already right-wing opposition movement, much of which repudiated him due to his support for the anti-democratic coup of 2002 against the legitimately elected government of Hugo Chavez.

And it is certainly true that both the Latin American Pink Tide, with its concessions to neoliberalism, and Venezuela’s Bolivarian Socialism, are deserving of critique, not least because Chavez and later Maduro kept the existing military and state apparatus in place. They simply redistributed oil revenues without seriously developing industry or agriculture. As with the Pink Tide, this had some success until China’s economy slowed down. Even before that, a worrisome sign was that Venezuela was importing more food and medicine over the past two decades than before. In addition, the very notion of creating socialism in one country was non-viable. And we certainly oppose the Maduro government’s restrictions on democratic expression, even though it is hardly the dictatorship the U.S. claims it to be.

But is now, when Venezuela faces the full force of U.S. sanctions, and possible military intervention, the time to point a finger by putting that kind of criticism at the forefront?

Thus, in addition to attacking the U.S.’s nefarious plans and criticizing the idiotic slogans of knee-jerk anti-imperialists like “Venezuela Is Not Divided,” we need to criticize equally firmly those parts of the left, however well-intentioned, and however much they use terms like socialist humanism, that support without qualification the Venezuelan “democratic” movement, equating it with the uprisings against the Assad regime in Syria or the Iranian regime. Those resistances and uprisings have significant left-wing, feminist, or labor dimensions, unlike Venezuela’s far-right-dominated opposition.

Therefore, we need to concentrate our fire on U.S. imperialism and other reactionary forces in Latin America and Europe that are trying to bring this right-wing opposition to power, not least to protect their property interests and to extinguish any anti-capitalist aspirations in the region and globally.