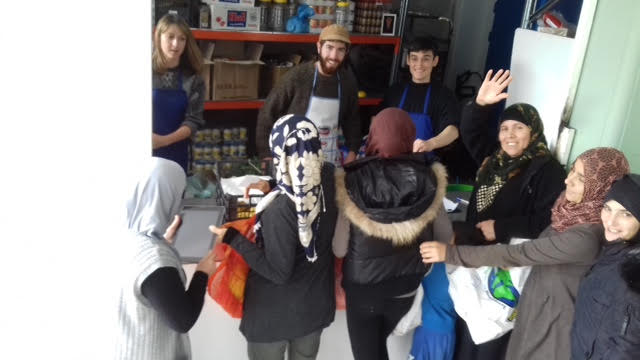 I’ve been in Salonica just over a month. All my time here has been as a volunteer in the Elpida Refugee Center, working mainly in the communal kitchen or in the food distribution center.

A 14th century Byzantine scholar wrote that “No man will be without a homeland, as long as Salonica exists.” From the Ottoman welcome of the Sephardic Jews in the 15th century to the arrival of a million plus Christians from Asia Minor in the population exchanges in the 1920s, Salonica has been a place of refugee. As my friend Thanos, a Salonica native, said to me when I first met him, “No one is Greek here.”

After the Greek people helped 850,000 refugees escape US funded wars in Afghanistan, Iraq and Syria and cross borders to their dream of Europe farther to the west, the EU shut the door in early 2016.

Sixty thousand plus refugees got stranded in Greece and by now are hidden from view in a variety of official refugee tent camps, many of which are in northern Greece like the no-name camp I visited one day with 800 Kurdish people living in tents under an open corrugated metal roof.

The EU promise of “family resettlement” and “relocation” to other EU countries for those stuck in Greece is for the most part still born, as is the overwhelmed Greek asylum process.  Neither the asylum process, nor resettlement/relocation are de facto EU policies.

The new EU policy is not just to keep war refugees in “transit countries” like Turkey, Lebanon, Jordan and Libya, but to return them, embodied in the recent EU deal to exchange “aid” to Afghanistan for taking back 80,000 plus Afghans in Europe. There is even talk of returning refugees in EU countries back to Greece. And, a reverse smuggling business is beginning to blossom taking refugees back to Turkey via a land route through Alexandropolis.

With the national elections coming up in the Netherlands, France and Germany, no one on the right or left wants anymore refugees coming to Europe trying to escape the on-going, but quite profitable slaughter such as the US financed assault on Mosul, or the US financed Saudi bombing campaign in Yemen or the Russian/Assad bombing of eastern Aleppo.

Still, what about the 60,000 refugees stuck in Greece?

From my limited experience here, I would say their main emotion is anguish. Anguish from not knowing their fate. Anguish from an uncertain asylum process. As some of the refugees told me, these camps are worse than prison. At least in prison, you know when you are going to get out.

When I asked Turkish speaking Syrian refugees what they wanted in a new country, the first two things they said were: “Insanlik” (humanity) and education for their children. I know they don’t want to hear this even though they know it,  but I think they can find that humanity here in Greece and specifically in Salonica.

Salonica has a Mayor named Yiannis Boutaris. He spoke recently at a World Affairs Symposium that I attended.  He said that historically the current refugee flows were “not more dramatic than ever before” and that “the EU should be ashamed that it can’t absorb four or five million refugees.”

Mayor Boutaris also interrogated the sub theme of the symposium: “seeking stability.”  He said dictatorships offer stability, but that if the city embraces the refugees with social stability it will work better than police protection.

I know that Greece has a 25% unemployment rate and, as another Greek friend told me, the new Gulag is forcing people and refugees not to work. I also know the Greek’s  Insanlik is being tested.

But still, the Mayor believes in the vibrancy of young people and I learned from my new Greek friends about all the social economic experimentation in Salonica that isn’t  just about survival but also about new forms of self governance. Then I watched the young refugees, neatly dressed with their new backpacks, going off to Greek schools with their Arabic/ Greek dictionaries and I had hope.

I left the women with some roses and I think I got a wave good bye.  See you at home.