A courageous Syrian collective challenges both ISIS and Assad in Raqqa 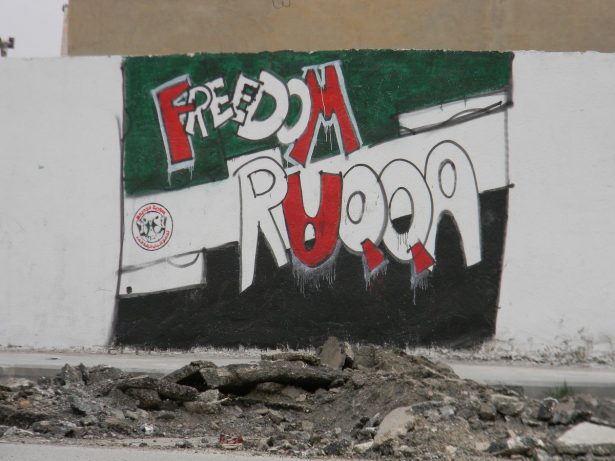 Just hours after Secretary of Defense Ash Carter announced that the United States is preparing to launch an offensive against the Syrian city of Raqqa, Abdalaziz Alhamza, a 25-year-old Raqqa native, spoke to a New York City audience about his hometown. Before the Islamic State captured the city in 2014, he recalled, few people outside of Syria had heard of Raqqa, “but now, most people hear about our city as the capital of ISIS.” Alhamza, an activist-journalist and founding member of the resistance group Raqqa Is Being Slaughtered Silently, or RBSS, has risked his life for the past several years in order to tell a different story. “Almost no one there has joined ISIS. We should be known as the capital of resistance.”

The group formed in 2014 as a collective of just 17 members, all under 30, aiming to spread stories of “the true extent of the suffering in Raqqa, and the hideous crimes of ISIS in the city.” RBSS both documented and helped organize protests against the Islamic State, using online platforms to connect activists with like-minded people. “We would find out there were many small demonstrations going on. We said, why don’t we tell everyone to come to one place, and make a really good preparation?”

The group has also used humor to undercut the caliphate, publishing satirical videos online and performing anti-ISIS stunts. The group has posted videos of themselves tagging city walls with graffiti slogans, including “down with ISIS, down with Assad, long live Syria!” The group also published a secular dissident magazine, which they disguised by choosing a cover design that mimicked ISIS publications. Concerned, too, that young people would be indoctrinated by ISIS, the group disseminated cartoons that deliver pro-freedom messages.

It wasn’t long before the group’s audacious efforts drew retaliation from the Islamic State. “We were making them crazy,” Alhamza recalled, “they installed security cameras and tweeted that they would catch us. But we were smarter than them.” Alhamza chuckled, a look of defiant mischief on his young face, but his smile was fleeting.

The group is aware they are playing a dangerous game. Four of their young members have been assassinated by ISIS, while others have lost family members. “One of our members, they took his father and three of his friends, and said they’d only let them go if he gave them the name of three of our reporters. He refused. They killed his father.” The terrorists then sent the man footage of his father’s murder. “It was horrible to watch,” said Alhamza.

ISIS has also followed RBSS members abroad. Syrian filmmaker Naji Jerf, who Alhamza called “a mentor, like a father to our group,” was killed by a sniper in broad daylight in Gaziantep, Turkey, where he’d sought refuge. Two other RBSS members were captured and beheaded in Turkey, and Turkish authorities intercepted several armed cars headed for the RBSS headquarters.

Alhamza now lives in Berlin. ISIS recently published his details online, promising a reward to anyone who killed him. The German authorities offered him protection, but he declined. “It didn’t seem right, when so many other Syrians have no protection.”

Now, the group operates in two teams — 17 remaining members in Raqqa continue to collect footage of atrocities and protests, which they send encrypted files of to their counterparts abroad. When ISIS seized control of internet services in the city, cutting the general population off completely, RBSS found ways around the lockdown. “We are smarter than them,” Alhamza repeated.

Women play an important role in the dangerous work of documenting life in Raqqa. “It’s almost like they have it easier in this way — they are forced to cover everything, and ISIS people believe they are not supposed to talk to women,” Alhamza said. All this helps their female members to avoid detection. “The work they do is just amazing,” he added.

RBSS has received international attention for their efforts, including being honored last year with the International Press Freedom award by the Committee to Protect Journalists. Today [October 27], Alhamza will accept the 2016 Civil Courage Prize in New York on behalf of his group. While the group is grateful for the international support, they are outspoken about the need for Syrian solutions to Syrian problems. “Local people are the answer,” said Alhamza, when it comes to liberating and rebuilding cities.

Sarah Aziza is an Arab-American writer, graduate student and activist based in NYC. She has previously worked among refugee populations in North Africa, Jordan and the West Bank. Her areas of focus include immigration, human rights, international politics, feminism and mental health. She is a lover of the story-less-told. Find her on Twitter @SarahAziza1 or www.sarahaziza.com.