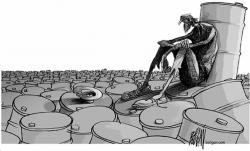 The Mexican political crisis which arose on September 26 with the killing of six, wounding of 25, and kidnapping of 43 students by police and gangsters in the state of Guerrero, and was then compounded by revelations of a conflict of interest involving the Mexican president and his minister of finance, has been exacerbated in December by a dramatic collapse of oil prices, the decline of the Mexican peso, and a falling Mexican stock market.

Since oil income represents the largest share of the Mexican government’s revenue, the decline in oil prices portends budget cuts which in turn could lead to more social strife.

Protests against the government over its role in and handling of the students’ massacre and disappearances continued though they diminished as the Christmas season began on Dec. 6. The students’ parents and much of the Mexican public remain unconvinced of the government’s story that the students were arrested by the police, turned over to the Guerreros Unidos gang, and then incinerated. The fact that Mexican police use torture to extract false confessions to construct a narrative to protect the authorities is well documented by Mexican and international human rights organizations and well known to the public. So the demand for justice continues.

At the same time, confidence in President Enrique Peña Nieto and his administration continued to evaporate as it was learned that not only had the president and his wife been living in a home owned by a big government contractor, but that Minister of Finance Luis Videgaray, architect of the country’s recent economic reforms, had also bought a home from another contractor, as reported in the Wall Street Journal on Dec. 11. Conflict of interest and corruption are endemic in the Mexican government at all levels, but revelations that the president and his finance minister themselves are curled up in bed with the corporations has shocked even the most cynical Mexicans.

These revelations, together with the murder and disappearance of the Guerrero students have taken a toll on the president’s support. In the two years since Peña Nieto was elected president, polls conducted by the newspaper Reforma indicate that he has fallen in the public’s estimation by 11 percent, with only 39 percent feeling that he is doing a good job. Some 58 percent of the public and 79 percent of opinion makers believe he is doing a bad job.

Some in the opposition believe Peña Nieto’s administration faces an imminent breakdown. Senator Javier Corral of the conservative National Action Party (PAN), told the Mexico City daily La Jornada that in his opinion, “putting together all of the variables—the lack of economic growth, governmental incompetence, social irritability, political corruption, which includes the scandals of the president’s wife and now of Videgaray, as well as an absolute crisis of insecurity—the government of Peña Nieto is collapsing.”

Mexico’s economy faces serious problems at the moment, and they begin with oil.

World oil prices are collapsing. In the summer, oil was selling for $107 per barrel. Since June the price of oil has fallen nearly 50 percent, with oil selling for less than $56 a barrel on Dec. 15. This is mostly due to the United States increasing oil production by more than 70 percent, while demand for oil has also fallen. Countries like Iran, Iraq, Russia, Venezuela and Mexico will be hard hit by this crisis.

This graph shows the decline of oil prices over the last year.

The collapse of oil prices will likely lead the Mexican government to let oil contracts to foreign companies as soon as possible, before prices fall even further.

Oil income revenues represent the largest single element of Mexican government revenue, and according to one study, the country will receive only 37 percent of the revenue from oil that it had budgeted. This almost certainly means that there will have to be budget cuts that will affect social services, which could lead to more social turmoil.

Then there is the falling peso. As a result of the oil crisis but perhaps also as a result of Mexico’s deepening political crisis, the value of the peso has fallen by almost half. The Mexican Central Bank has announced that every time the peso falls by more than 1.5 percent it will intervene to stabilize the peso. The devaluation of the peso represents a vote of no confidence in the government, while it also makes its exports cheaper, and constitutes a de facto wage cut for Mexican workers.

Note the rise of the number of pesos it takes to equal one U.S. dollar; that is the fall in the peso’s value.

At the same time, the Mexican stock market has been falling, for example losing 3.5 percent of its value on Dec. 16.

Foreign direct investment (FDI) is one measure of international investors’ confidence in Mexico and a projection of the future growth of the Mexican economy. Mexico reported US$35.2 billion in FDI in 2013 while, at the same time, FDI in mining was US$2.1 billion for the first nine months of 2014. Those represented a return to levels before the 2008 Great Recession. But FDI in 2014 has declined as shown in the graph below and may not reach US$30 billion this year.

While the Mexican economic situation looks bleak, Agustín Carstens, governor of the Bank of Mexico, expressed confidence that, “We are well prepared to face the storm blowing in from outside.” He emphasized that Mexico has international reserves of US$192 billion and has just received a flexible credit line from the International Monetary Fund of US $70 billion. Mexico’s money in the bank and good credit with the IMF does not, however, mean much to most of the country’s people.

The current political crisis is in large measure an expression of Mexico’s persistent poverty, a situation that has particularly affected the country’s youth, the force that is driving the current wave of protests over the student disappearances. A recent study published by the Economic Commission for Latin America (ECLAC/CEPAL), as reported on Telesur found that:

“Out of 38.9 million Mexican young people from 12 to  29 years of age, six million live in a situation of indigence, while 44.9 percent live in some type of poverty. Some 70 percent of Mexican youth lack access to social security, 30 percent to health services, and 15.3 percent to adequate educational opportunities. More than half the country’s unemployed population falls into this age group. The unemployment rate for youth rose to 7.7 percent in 2013, much higher than the 4.6 percent national average.”

In fact, not only youth, but half of all Mexicans live in poverty, and almost ten percent live in extreme poverty.

While I have been writing about Mexican labor, social movements, and politics over the past thirty years, these statistics have hardly changed. Though the nationalist economic model of state-owned industries has been replaced by the neoliberal free market model, and though the relative weight of agriculture and industry have changed, and though ten percent of all Mexicans have left the country to go to live in the United States, still, year in and year out, about half of all Mexicans live in poverty. It is this persistent poverty, exacerbated by growing inequality as Mexico produces ever more billionaires, that forms the background to the past social upheavals, to the current crisis, and to the coming ones. Until there is a fundamental change in country’s political, economic, and social system, we can expect continued social eruptions in Mexico.

What, then, are the prospects in Mexico, given the underlying social situation and the current political crisis? Well, first, there are several possibilities in Mexico that are precluded by the United States’ government: 1) the election of a left government; 2) a military coup; or 3) a total breakdown in social order. The United States must maintain a nominal democracy in Mexico or, if it cannot preserve democracy in North America and in its “own backyard” (as Mexico is always so disrespectfully called), it will lose credibility throughout the world. To say nothing of the billions of dollars of U.S. investments in Mexico that must be preserved.

The question, then, is whether or not there exist social forces that could create a unified movement for the genuine reform of the Mexican government. Reform, because the possibility of revolution in Mexico is impossible without a broad unified movement and a strong left party, neither of which exist at this time.

While the Mexican government seems in this current conjuncture to be facing serious problems, there is no strong political party on its right or its left that is prepared to push to see if the Peña Nieto administration can be forced to step down. The National Action Party (PAN) is too deeply involved in the political and economic system to risk a serious challenge that might go further than it intends. On the left, the situation is not so different where calls for change are not accompanied by the organization of mass action. Andrés Manuel López Obrador, head of the Movement of National Regeneration Party (MORENA) and the country’s leading left politician, has been calling for months for Peña Nieto to step down, but his call has found little response beyond his own party and others on the left, perhaps because so many Mexicans are cynical about all of the political parties.

The large and important wave of protests will likely decline during the Christmas season which continues until January 3, and so far they have not led to the building of a massive, national movement that might first bring down Peña Nieto and then put fundamental change on the social agenda. We will wait to see if the movement returns to the streets in January and if it grows.

Posted December 16, 2014 Mexico, Political Economy by Dan La Botz
About Author
DAN LA BOTZ is a Brooklyn-based teacher, writer and activist. He is a co-editor of New Politics.