A Challenge to Occupiers and Unionists 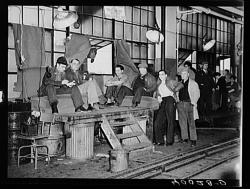 Where have all the occupiers gone? We have scattered, enmeshed in an economic system we loathe, faced with the dismal realities of the prolonged "Great Recession" and a jobless recovery that only benefits the ruling class. With our future prospects bleak and our hopes for creating a more just economy diffused, we are left with only our collective will, experience, and values. As the reality of poverty and downward mobility looms large in our lives, we are faced with  a choice: to live our values or to give up and submit to economic oppression.  For these concepts of economic democracy and freedom of speech to truly flourish, it is necessary to take the occupation to where it most directly impacts our lives… It's time to take occupation to the workplace!

We are still the 99%! We are still the workers and the poor, the young and old. We have control of our economic future, if only we choose to grasp it! I believe that it's time to suggest a time- honored, revolutionary idea anew. We need to come together as workers, as a class, to withhold our labor and our consent. Collectively demanding what we have rightfully earned; the capital our labor produces. This means nothing less than giving birth to a new Labor movement, one that seeks to organize against the elites, with all workers in all industries. As capital is now global, so too must we be global. There is no other way to be effective. The fulfillment of our mission is to build a profoundly democratic, collective labor movement organized around the interests of our class, putting the economic needs of the many over the irresponsible and greedy desires of the few.

Camping in parks and in front of buildings was never enough. It was simply a prelude, a hint of something greater. What it did was give us a collective identity and moral foundation as the 99%. The time has come to move beyond fruitless exercises. If we are to truly live up to the values of the occupy movement, we need to occupy where it counts. The place we are most directly being exploited and used as tools of the capitalist system, the workplace.  We need nothing short of a "One Big Union" of the 99% acting collectively for our class interests. This is the only way that we can ever hope to achieve our great ambition of economic democracy.

We face a choice as a people. We can either passively go through the motions and be satisfied with the lame and innocuous outlets our culture provides, or we can actually demand a real say in our lives. Through the generations we collectively created the massive wealth and infrastructure on which capitalism depends. Our hard work created it all, in a very literal sense. We are autoworkers, truck drivers, landscapers, farmers, longshoremen, tradesman, fast food workers, nurses, teachers, firefighters. Our labor creates all wealth! Our collective consent is what the economy depends on. Without us, the elites are nothing. They only seek to leach off of the surplus we create. Why should they alone decide what to do with the products of our labor?  Ultimately we will be cast off, once we are no longer needed for their profits. If we don't restructure the economy to work for us, we will only face a non- stop decline in our standard of living. The 1% needs us, but we have no need for them. Their existence is parasitic.

It's time we examined what has worked in the past and make it relevant today. What social movement was prosperous when the wealth of our society was most equitably distributed? It was the Labor Movement! Look throughout history and you will find that the only time the capitalists have ever ceded anything to us is where we have collectively forced them to. The greater density and power unions had, the better we did as a class. The opposite is also true, as unions have declined our share of the wealth has also declined.

The time is gone to be naïve. The rich are class conscious and act in their own interests. It's time we wise up and do the same. The more atomized we become, the more we lose. We need to organize into creative and democratic worker organizations with the explicit purpose of spreading the knowledge of solidarity and collective direct action to all working people. We can no longer afford to think of only ourselves. The self-made man is a myth, invented to prop up an unjust and immoral system.

In the end we are just another replaceable part for the corporations. Our economic system sees us only as disposable tools for producing capital. Why else would the department that fires and hires us so commonly be called "human resources"? It's time we become more than a commodity. We are the 99%, the vast majority, the working class. If we could only realize our common economic interests and forget about our trivial differences, we would be unstoppable! We are capable of changing the entire economic and cultural system for our collective benefit. We are the most powerful social class on the planet. It's time we start acting like it.

*Sean Crawford is a fourth generation Union member, raised by women who were part of the Women's Emergency Brigade during the UAW's formation in the Flint Sit-Down Strike of 1936-37. Sean currently works at General Motors Lake Orion Assembly as a nightshift UAW committee person and team leader.

One comment on “A Challenge to Occupiers and Unionists”