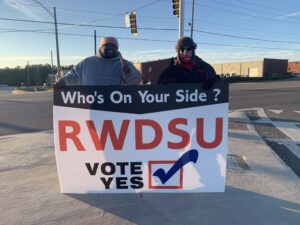 Can little David beat Goliath? That’s the question in Bessemer, Alabama, where 5,800 warehouse workers will vote this month on whether or not they want a union at the Amazon facility there. If they vote to unionize, it will be the first successful union campaign at Amazon in the United States. For the union, the vote will be a real contest, since unionization rates are low in the South and only 8% of Alabama’s workers have a union. A network of workers’ organizations is calling for solidarity demonstrations around the country on March 24.

Amazon e-commerce, Amazon Prime Video, and its Whole Foods grocery stores have made the company enormously wealthy, powerful, and influential. Driven largely by the COVID pandemic, Amazon’s 2020 net sales were up 38 percent, to $386.1 billion and Jeff Bezos, the company’s founder and CEO, has a fortune valued at $190 billion.

The pandemic led millions during this last year to order clothing and household goods through Amazon, to buy food delivered by Whole Foods, and to stay home and watch movies on Amazon Prime. To meet this demand, the company hired 427,300 employees during the period from January to October, bringing its global employment to 1.2 million. These new workers—1,400 per day—represented a 50% expansion of its workforce. In addition, Amazon employs another 500,000 contract employees.

In the United States workers may win recognition of their union through an election conducted by the National Labor Relations Board. First the union, in this case the Retail, Wholesale and Department Store Union, had to prove the workers’ interest, which it did by convincing 2,000 workers to sign cards saying they wanted an election. Now workers are voting, a process that will continue until the end of March. Meanwhile union organizers distribute literature at the plant and the company holds meetings with the workers where it tells them that the union will cost them too much money in dues.

The Amazon union drive has captured national attention. President Joseph Biden released a video in which he expressed solidarity with the workers, saying, “There should be no intimidation, no coercion, no threats, no anti-union propaganda.” And actor Danny Glover has visited the union picket lines at the company to show his solidarity and offer encouragement.

Amazon employees in the warehouse—some of whom must scan up to 300 items per hour—make $15.00 per hour, more than they would make in retail work, but less than most warehouse workers make. Workers also receive health benefits and 401(k) pension plans, though rapid labor turnover means many will never collect such benefits. Amazon workers complain of musculoskeletal problems from repetitive lifting and bending together with miles of hiking on concrete floors.

Over the last few years two different groups have been organizing Amazon workers, one, a coalition of unions and Black and Latino groups called Amazonians United, and another called Athena, made up of workers, communities, and consumers. These two have organized some small walkouts at Amazon in various states. RWDSU, the union organizing the Amazon warehouse in Bessemer, represents retail workers at Macy’s and Bloomingdale’s and is part of the United Food and Commercial Workers Union. RWDSU has been successful organizing poultry plants in the region. Workers’ concerns about health during the COVID crisis have helped to fuel workers interest in this Amazon union campaign.

Amazon is the latest in a string of high profile, high stakes union organizing campaigns at auto plants and at Walmart stores over the last several years. Those campaigns failed largely for three reasons. First, the South, once the home of slavery and Jim Crow, remains a largely union free, low-wage region. Second, in the South the anti-union Republican Party dominates government at all levels. Third, many workers have been indoctrinated over the years in rightwing ideas, including opposition to unions.

If the union is to win this time, workers will have to overcome all of that in the fight for dignity. We believe they can, but it will not be easy.