Call to Demonstrate against the War in Ukraine 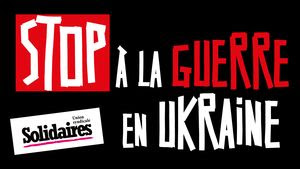 The signatory associations call for a demonstration on Thursday, March 17, in all cities of France, to express our solidarity with the people of Ukraine victims of the crime of aggression committed by the Russian government against their country.

The organizing associations invite all European politicians to mobilize all their energy to:

At a time when a war with serious consequences is raging in Europe, it is imperative that international solidarity live in defense of the freedoms of all.

On Thursday, March 17, many of us will demonstrate to express our solidarity and support for Ukrainian, Russian and Belarusian citizens and organizations committed to human rights and against war and to all the victims of this conflict.

With the support of: