Building Class Power, Not Electoralism, Is the Future of the Left 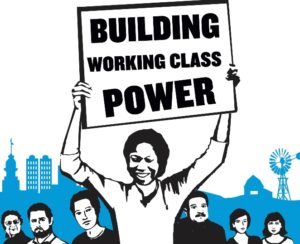 In his recent piece “Mass Politics, Not Movementism, Is the Future of the Left,”  Paul Heideman aims to convince the Left that a strategy built primarily around “mass politics” (by which he implicitly means national electoral activity) is still the road forward, even though Bernie has ended his campaign. Both Heideman and Jacobin have argued for an “all in for Bernie” strategy, and here Heideman burns straw men rather than engaging in the live debate about what strategy the socialist Left should advance at this impasse.

“Mass Politics, Not Movementism” falsely counter-poses this “all in for Bernie” strategy to a “retreat to…anti-electoral movementism and the embrace of left politics as a subculture.” If anyone is making this argument, then it is a minority position I have not encountered. There is a general consensus on the Left about the need to engage in electoral activity (even if there are sharp disagreements about how), and also on the need for socialists to root themselves in workplace and community struggles.

Heideman suggests that the cause of the Left’s isolation for the last four decades was a “fetishism” of building movements, but he says nothing about the political context that opened up the possibilities for broad Left parties and Left electoral campaigns internationally in the last decade (e.g. Syriza, Podemos, Corbyn, Sanders). These openings did not exist in the same way before the crisis that began in 2008-2009.

I agree that in the aftermath of Bernie Sanders’ announcement that he is ending his campaign, endorsing Joe Biden and handing over his lists, staff and other resources, the Left needs to think about the relationship between movements and elections. Unfortunately, Heideman’s article emphasizes what we should not be doing and says very little about what to do at a moment when there are new openings for building a qualitatively stronger socialist Left in the United States.

What options for mass national politics are available to us now that the Bernie campaign is over? Is all of the Sanders campaign infrastructure going to become something independent that we can build around? Wasn’t that an expectation going in? Will DSA become the vehicle for this activity now that the Sanders campaign has ended? Is it the 2020 congressional elections that provide a next door to “mass politics?” Is anyone raising questions about this simply written off as pining for “drum circles” and “dumpster diving” while not  engaging with the opportunities of the moment?

Insisting, as Heideman does, that we must focus on the national political arena and not “retreat” to small movements avoids one of the main strategic problems of the Sanders experience. Namely, that there was no political breakthrough because the forces of movements were too weak to make the Sanders platform seem viable.

While Bernie’s program remains very popular, the Sanders campaign hit the limit of what the Left can expect to win through an electoral vehicle alone, built primarily around ideological appeals for reforms. However popular these demands are, without class organization, and mass movements behind them giving credibility and successfully struggling and winning things, such demands will seem out of reach and can easily be brushed aside by more conservative narratives about being “realistic” and the threat of Trump being too great to risk a polarizing candidate.

In avoiding any assessment of this very recent experience, Heideman falls back on an electoralist argument that insists elections are the only arena of “mass politics” and the main way radical consciousness is developed and reforms are won. This is no more helpful than the “movementism” Heidemen describes in his piece, when activists reject electoral activity altogether because they see movements as being the primary source of change. Many credit Bernie with opening up possibilities for the socialist Left that have never existed before. And yet, by focusing exclusively on the “mass politics” side of things, we directed our resources away from building independent movements around these very openings.

Nor can we ignore the fact that the balance of class forces has changed very little since the Sanders’ campaign began. Though millions campaigned for Sanders, we are not yet close to winning his platform, and we are no closer organizationally to the goal of establishing a vehicle for independent working-class politics. Raising popular demands is not the same as sustained vehicles for working-class struggle and conflating electoral campaigns with rebuilding ‘infrastructures of resistance” will not help us develop a mass Left politics in the U.S.

It is admirable that so many jumped into a Bernie Sanders campaign. But somewhere along the line, the idea that Bernie could win ended up taking primacy over the necessity of independent organizing. While what it might mean to win deserves its own critical assessment, the argument for a dirty break—in which socialists make use of the campaign in order to prepare to bring people with them into an independent formation—has disappeared from the discussion entirely.

The lesson we should draw from this experience is not that campaigning harder next time, or contesting more local elections through the Democratic Party, will build our forces towards victory. The defeats of both Sanders and Corbyn in Britain demonstrate that an electoral campaign on its own, disconnected from strikes and social struggle, is incapable of transforming the balance of class forces.

Heideman ends his article, “…electoral politics are [not] uniquely hostile to the Left. After all, if there is anywhere employers have more power than the Democratic Party, it is surely the workplace, and the Left isn’t about to write off struggle in that field.” This is a false comparison. In the workplace, workers have the potential power to disrupt production and profits. What comparable power do we have in Democratic primaries, where corporate funding and lowest-common-denominator appeals to “get out the vote” inevitably win? It is only in the midst of, and acting as the voice of such struggles in workplaces and communities that election campaigns—organized independently of the Democratic Party—can build a new socialist Left.

Heideman anticipates this argument for emphasizing activism by noting the inherently episodic nature of struggles. He writes: “Without institutions capable of sustaining and directing mass mobilization, the movements inevitably faded.” This is why the primacy must be on social struggle, with an electoral strategy that compliments our primary task of building ‘infrastructures of dissent’ that can build beyond individual protests or strikes.

This means membership organizations composed initially of activists who attempt to promote struggle even during lulls of national activity, that are accountable to and run by those who support them in a way the Democratic Party is not and never will be; it means rank and file groups in workplaces; ongoing organizations of tenants, women, people of color, immigrants and queer folks; it means putting the power of decisions and action into the hands of as many of the oppressed and exploited as possible; it means organizing the “us” that Bernie so inspiringly speaks to.

Elections can be a component part of this strategy, but they are a tactic for building our own power, not a means of winning reforms or achieving socialism. Again and again in the past hundred years we have seen that it is mass, disruptive and often illegal struggles that win gains, build popular radicalism and the Left. These are the activities that will put the question of independent electoral organization on the political agenda.

The economic recession and the COVID-19 pandemic have revealed again how capitalism produces social and economic catastrophes. Despite the pandemic, social isolation and skyrocketing unemployment, we are seeing wild-cat strikes and protests in workplaces around the world, and an overall deepening of the radicalization that began after 2008. The same day that Heideman’s article appeared, Bloomberg ran a piece from a member of its editorial board arguing that COVID-19 will lead to social revolutions.

Whether the defensive strikes and struggles against the treatment of essential workers and the unnecessary deaths, disproportionately black and brown, served up by an unplanned and chaotic capitalist economy will translate into ongoing organizing (let alone revolutions!) remains to be seen. The outcome of the pandemic and crisis—whether it will deepen hostility to capitalism or promote an even more vicious right-wing, nationalist populism, will depend, among other things, on whether DSA members, working-class radicals, and others, are projecting a politics of struggle and a method of building capacity and organization.

This training is, arguably, very different from the training required for campaigning for Sanders in a primary election. If we sow the soil and develop such a strategy, including its electoral component, we could get closer to the active working class base that could finally provide the composite parts of a future working class party in the U.S. There is ample evidence that this is possible now, even if our movement is not as strong as we aim to build it.

Organizing working-class resistance will mean developing a robust strategy that includes both building movements and independent electoral campaigns. We can organize many thousands to exert the class power that can start to win things, which is the most enduring basis for working class and socialist organization and consciousness.