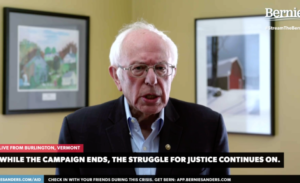 In the aftermath of Bernie Sanders’s suspension of his presidential campaign, analysis of what went wrong and possible ways forward will be essential, if painful, for the American Left. Understandably, those who went “all in” for Bernie will feel compelled to defend this position from those who pointed to the limitations of the Democratic Party and the electoral road to social transformation. Sanders laudably moved American political discourse to the left, and the popularity of his progressive agenda among young people should be a source of optimism and hope. At the same time, honest assessments of Sanders’s primary loss will be vital to the advancement of any left political project in the future.

While defenses of unreserved support for Bernie’s political revolution are understandable, especially from those who worked for his campaign, if they are wrong they must be challenged. A recent piece from Paul Heideman in Jacobin aims to foreclose discussion of left strategy by misleadingly opposing what he calls “mass politics” to “movementism.” While a short piece possibly not given adequate reflection in the wake of Sanders’s campaign suspension, it proposes a false dichotomy that puts the cart before the horse and fails to confront the central issue—why Sanders could not win the Democratic primary.

Heideman’s argument is that Sanders’s loss in the Democratic primary “has the potential to be one of the most productive defeats the Left has endured in decades, if we learn the right lessons from it.” Well, possibly, but Heideman never explains what these lessons might be. Evidently they have nothing to do with trying to win the Democratic Party nomination, Sanders’s weaknesses as a candidate, or his campaign’s unsuccessful attempt to get traditional nonvoters to the polls. These are issues that have to be confronted head-on for any honest reckoning of what went wrong and where to go from here.

Instead, Heideman claims that in the wake of the defeat “there is going to be a strong temptation to retreat to the politics that were hegemonic on the Left before Sanders’s first run: anti-electoral movementism and the embrace of left politics as a subculture.” Heideman is correct that the anarchist horizontalism of the 1990s and early 2000s was a dead end; the likelihood of there being a “strong temptation” to return to this kind of politics is more debatable. Leaving that aside, the association between an ill-defined “movementism” and the adoption of some kind of subcultural left identity is deceptive, at best.

Heideman further claims that without “institutions capable of sustaining and directing mass mobilization,” social movements fade, with participants falling back into an “embrace of marginality.” An historical example of an institution that sustained and directed mass mobilization along the lines Heideman is thinking would have been helpful here.

What immediately comes to my mind are the Populists of the late nineteenth century and the Congress of Industrial Organizations (CIO) in the 1930s—two successful grassroots organizations coopted and effectively destroyed as radical forces by moderate leaders and the Democratic Party. Instead Heideman points to the Sanders campaign’s mobilization of hundreds of thousands of volunteers who tried to convince people their desire to improve their lives would best be helped by a socialist president. This, he claims, “is the very essence of mass politics.”

One can admire the legions of Sanders supporters who tirelessly canvassed for him while also finding this argument problematic. One could convincingly argue that direct action in the form of strikes, sit-ins, boycotts, and other forms of public demonstration better constitute “mass politics” than large-scale canvassing efforts.

Also unclear is what Heideman means by the “achievements” of the Sanders campaign. Though lacking a sufficiently internationalist perspective Bernie’s platform was undoubtedly worth fighting for, and as noted mainstream discussions of healthcare, the environment, labor, and education have moved to the left as a result of his visibility. Yet none of our goals have been realized, and shifting the terms of political debate, while important, is not enough.

But despite not actually winning Heideman insists on the correctness of the electoral approach. While acknowledging that electoral politics in the U.S. are institutionally biased against socialists (or in fact anyone not on a Democratic or Republican ticket), and that the Democratic Party whose nomination Sanders sought is run by an anti-socialist corporate establishment, Heideman writes that “it doesn’t follow from this that electoral politics are uniquely hostile to the Left.” It doesn’t? Then what, one wonders, does follow from it? It is in fact difficult to imagine an electoral system more hostile to fundamental social transformation than that of the U.S.

Not only is there no logical relationship between mass politics and elections on the one hand, and social movements and marginality on the other, but this conceptualization denies history—what should be an essential guide to left strategy today. Bernie himself repeatedly emphasized that real social change comes from movements, not politicians. For me this recognition was always the most attractive thing about him. Sanders knows that it was movements—abolition, labor, women’s rights, civil rights—that brought about real change in American history.

At best, politicians implement demands that come from society. Moreover, without the radical transformation of society as well as culture—the way people relate to each other as well as how they see the world—that comes from grassroots social struggle, legislative changes are easily rolled back when reactionary governments come to power.

I am emphatically not arguing that the Left should refrain from elections and retreat to some fascination with spontaneous direct action. Yet the fundamental question Bernie supporters have to address is why the gamble on traditional nonvoters in Democratic primaries failed. This is a difficult question that will require serious reflection and honest debate—in good faith. It could very well be that despite Bernie’s best efforts most working-class people still do not see elections as a realistic way to improve their lives. And are they wrong?

Yes, executive orders and the bully pulpit of his office would have been tools Sanders could have wielded as president. But would these really have given us Medicare for All, a Green New Deal, workplace democracy, racial justice, and free education? And if they wouldn’t, we must recognize that strategic rethinking is in order. And we might even conclude that elections can only ever be one part of a much broader strategy that must have roots in our communities and workplaces.

Posted April 17, 2020 Electoral Politics, Left Politics, Socialism, United States by Phil Gasper
About Author
Daniel Johnson teaches in the Department of American Culture and Literature at Bilkent University in Turkey. His writings have appeared in New Politics, Against the Current, Jacobin, and Monthly Review.