A still undetermined number of supporters, activists, and sympathizers of two Brazilian left-wing political parties, the Socialism and Freedom Party (PSOL, Partido Socialismo e Liberdade) and the Unified Socialist Workers’ Party (PSTU, Partido Socialista dos Trabalhadores Unificado), are being charged by the State Prosecutor's offices (Ministérios Públicos) of Rio de Janeiro and São Paulo for having made small donations to these two parties during the 2014 elections. 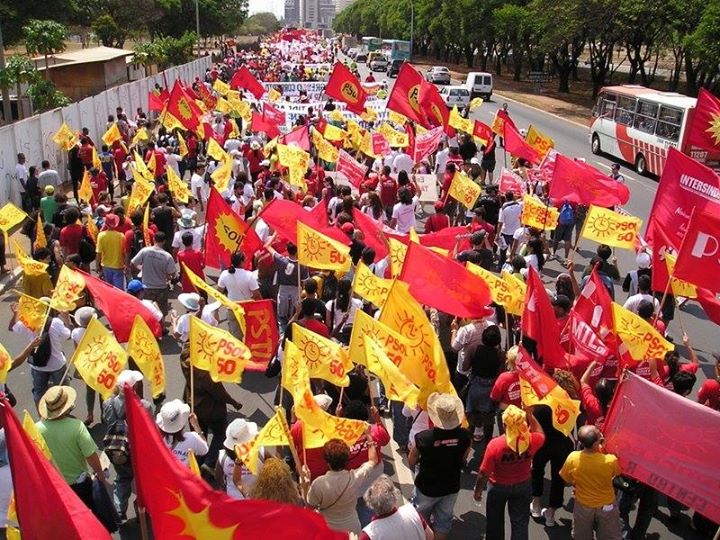 One of the activists linked with PSOL, Lucas Mourão, being charged by the Electoral State Prosecutor's office (Ministério Público Eleitoral) of Rio de Janeiro, explained his case on his Facebook page on October 15. He says in 2014 he donated R$60 (about US$15) to the campaigns of Jean Willys and Tarcísio Mota, two PSOL candidates running for, respectively, Federal Deputy and Governor of Rio de Janeiro.

"I aided the campaign as a volunteer, in my free time, always with a handful of pamphlets in my bag and stickers on my chest, and, obviously, without receiving a single penny.

Now this is where the story gets strange: the Electoral State Prosecutors office is charging me (and many others!) for having donated those petty 60 reais (15 US dollars)! That's because electoral law only allows for donations from individual persons up to a limit of 10% their income of the previous year…

When it was all tallied up, the State Prosecutors’ office arrived at the brilliant conclusion that I, in the year prior to the donation (2013), earned a gross income of less than 50 reais (13 US dollars) per month!

These guys, these great thinking Brazilian lawyers, came to this conclusion because, upon cracking open my confidential tax report (!) they saw that I was exempt from income tax, then, they concluded that I had earned ZERO income in 2013 and, therefore, I could not donate anything to any electoral campaign…"

In Brazil, people with an annual income under R$22,499.13 (about US$5,790) are exempt from paying income tax. Electoral law allows campaign donations up to 10% of an individual person's income from the year prior to an election, but, being exempt from paying income tax, the State Prosecutors office deemed the activists to have no income. As such, the state claims they could be committing an electoral crime by making donations.

Lucas Mourão, who is also an attorney, explained that exempt individuals may donate up to 10% of the value of the exemption limit, therefore, there is no illegal wrongdoing.

Mourão says that already nearly 100 such cases have been counted in Rio de Janeiro alone. In fact, in the comments on his post thread, multiple people reported how they are being prosecuted by the state for the same reason.

One of these is Sabrina (who asked not to disclose her last name), who donated R$15 (just under US$4) to the campaign of Marcelo Freixo, a PSOL candidate for the Federal Deputy position in Rio de Janeiro in 2014. According to Sabrina, her case has already been ruled in her favor:

"I donated 15 reais (4 US dollars) and was also prosecuted! (…) In my case, the State Prosecutors office requested to dismiss the case and the judge ruled in agreement, in a judgment that was shorter than 2 paragraphs… And now I'm advocating the defense of a guy that was also charged for having donated 50 reais (13 US dollars). It's so surreal to use the judicial machine like this just because of these donations!

All donations to PSOL from individual persons exempt from income tax are being investigated, by all indications."

Antônio Bastos noted that cases seem to be coming “in order from top to bottom,” which would point to a persecution of left-wing parties and their supporters.

"In some cases there is even a copy of the announcement sent to electoral prosecutors from the head of the Rio de Janeiro Electoral State Prosecutors office, asking for “commitment” in pressing charges. […] I mean, it's a directive from above for “general prosecution” framed in these terms, and maybe some prosecutors made a point to gather cases to prove it…"

For Sabrina, this is a “clear violation of the democratic principle”:

"[To] presume that an exempt individual cannot donate anything at all prohibits income tax exempt citizens from being able to contribute to whichever political party they hold in highest affinity (and, thereby, disenfranchises their citizenship) and, consequently, tosses the smaller-sized political parties out of the electoral race."

The activist Matheus Lara said he had been acquitted, but he did not agree to the invasion of privacy:

"I was also prosecuted. I was exempt, but I had a way to show my income. I was acquitted. But my tax AND banking confidentiality were broken open."

The activist Cristiane Talhiaferro is also being prosecuted:

"My case is still in proceedings too. The judge requested evidence and I had to send in my year of banks statements from 2013. They can breach into confidential banking records for someone who donates 50 reais (13 US dollars) and that's okay, but for someone who embezzles millions they can't…"

For further details, see the original article at GlobalVoices.