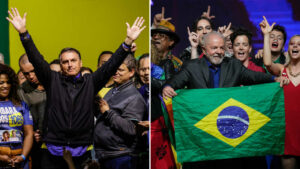 The result of the first round of the Brazilian elections on 2nd October is mixed. Certainly, Lula, the candidate of the Workers’ Party, is in the lead, with 48.4% of the vote. But the hope of a victory in the first round has vanished and, above all, he is closely followed by Jair Bolsonaro, the neo-fascist candidate, with 43.2%–much more than the polls predicted. There will therefore be a second round on October 30, which, barring an unexpected reversal, should be won by Lula. However, Bolsonaro’s supporters appear to be in control of parliament as well as several regional governments. In short, the neo-fascist current will probably lose the presidency, but remains an extremely powerful political force.

Brazil’s dominant classes have never had a great fondness for democracy.   Inheritors of three centuries of European colonization and four centuries of slavery, they have shown, in the last hundred years, a strong propensity for an authoritarian state from 1930 to 1945 under the personal power of the caudillo Getulio Vargas; 1964-1985, a military dictatorship; in 2016, a pseudo-parliamentary coup against President-elect Dilma Rousseff; from 2018-2022: neo-fascist government of Jair Bolsonaro. The more or less democratic periods seem to be parenthesis between two authoritarian regimes.

The four years of Bolsonaro’s presidency have been a huge disaster for the Brazilian people. Elected with the support of the bourgeois press, business circles, landowners, banks, and neo-Pentecostal churches, he took advantage of the fact that Lula, the only opponent capable of beating him, had been put in prison, under false accusations. The former captain was unable to fulfil his dream of re-establishing a military dictatorship and shooting “thirty thousand communists.” But he has sabotaged every health policy in the face of Covid, resulting in more than 600 thousand deaths; he has ravaged Brazil’s fragile public services (health, education, etc.); he has reduced tens of millions of Brazilian women to poverty; he has actively supported the destruction of the Amazon by the kings of soybeans and cattle; he has promoted neo-fascist, homophobic, misogynist, and climate-sceptic ideas; he supported the paramilitary militias (responsible for the assassination of Marielle Franco); and he has not ceased to try to set up an authoritarian regime.

Will the October 2022 elections put an end to this nightmare? Lula is likely to win in the second round on October 30. But Bolsonaro, following the example of his political model, Donald Trump, has already announced that he will not recognize an unfavorable result: “If I lose, it is because the vote has been falsified.” A part of the Army, strongly represented in his government, seems to support him: will it go so far as to take the initiative of a military coup against the elected president, i.e. Lula? This hypothesis cannot be ruled out, even if it does not seem the most likely: the Brazilian Army is not used to moving without the green light from the Pentagon and the State Department. But right now, Biden has no interest in supporting a tropical Trump at the helm of Brazil. Bolsonaro tried to mobilize his supporters—police, militiamen, retired generals, neo-Pentecostal pastors, etc.—to create a crisis situation comparable to that caused by Trump around the Capitol after his electoral defeat. Will he have the same success as his North American idol?

Despite the highly questionable choice of a reactionary bourgeois politician (Geraldo Alckmin) as his running mate for vice-president, it is clear that Lula—Luis Inacio da Silva, former metalworker, trade union leader of the great strikes of 1979, and founder  of the Workers’ Party—is currently embodying the hope of the Brazilian people to put an end to the neo-fascist episode of the last four years. He is supported by a broad coalition of forces, which includes not only most of the organizations of the left and the social movement—trade unions, the landless movement, the homeless movement—but also the broad sectors of the industrial bourgeoisie, which unlike the land owners, who remain loyal to Bolsonaro, came to the conclusion that the ex-captain was not a good option for business. It must be acknowledged that the electoral battle was not preceded by a rise in popular mobilization as in Colombia.

The Party of Socialism and Freedom (PSOL), the main force of the radical and/or anti-capitalist left in Brazil—where there are several currents associated, in one form or another, with the Fourth International—decided, after a long internal debate, to support Lula from the first round. A small dissident current, led by the economist Plinio de Aruda Sampaio Jr, who disagreed with this choice, left the party, but the main left currents of the PSOL—such as the Movement of the Socialist Left (MES), whose spokeswoman, Luciana Genro, was the presidential candidate of the PSOL in 2014—have, despite their desire for a PSOL’s own candidacy in the first round, accepted the majority decision and actively participated in the campaign in support of Lula.

Most PSOL activists have no illusions about what the government led by Lula and the Workers Party (PT) would be: probably an even more unbalanced version of the social-liberal policies of class conciliation of previous experiences under the aegis of the PT. Admittedly, these experiments have allowed some social advances, but it is not certain that this will be the case this time. This will depend, of course, on the ability of the radical left and, above all, of the social movements, of the exploited and the oppressed to move, autonomously and independently. Nevertheless, it is obvious that the vote for Lula is an unavoidable necessity to free the Brazilian people from the sinister nightmare that the regime of Jair Bolsonaro has signified.

Once elected, Lula will face many difficulties: fierce opposition from sectors of the Army, the kings of cattle and soybeans, neo-Pentecostal churches, fanatical (often armed) supporters of Bolsonaro.  He risks having before him  a hostile Congress, dominated by reactionary forces; the present Chamber is governed by the so-called “4 Bs: beef, banks, Bibles, bullets”, i.e. landowners, finance capital, evangelical sects and paramilitary militias. One of the decisive battles of the future will be the rescue of the Amazon, which is being destroyed by agro-capitalism.

In addition, Lula will be, like Dilma Rousseff, under the permanent threat of a “parliamentary coup.” This results from a disastrous choice for the vice-presidency: Geraldo Alckmin, former governor of Sâo Paulo, the former right-wing opponent beaten by Dilma Rousseff in 2014. Lula probably chose him to give pledges to the bourgeoisie and disarm the right-wing opposition. But he has thus given a decisive weapon to the ruling classes. If Lula takes any action that does not please the Brazilian oligarchs, who controls the majority of the parliament, he will be the subject of impeachment proceedings, as was the case with Dilma in 2016. In this sad precedent, she was punished under  ridiculous pretexts, and replaced by the vice-president, Temer, a reactionary of the so-called bourgeois “center”.  The same could happen to Lula: impeachment and substitution by Alckmin. The Colombian Gustavo Petro was more skilful, choosing as running mate Francia Marquez, an Afro-Colombian woman, feminist and environmentalist.

That said, the imperative of the moment, in October 2022, is, without a doubt, the vote for Lula.  As Trotsky explained so well almost a century ago,  the broadest unity of all the forces of the workers’ movement is the necessary condition for defeating fascism.

Posted October 3, 2022 Brazil, Left Politics, Uncategorized by Dan La Botz
About Author
MICHAEL LÖWY, a French citizen born in Brazil, is research director (emeritus) at the National Center for Scientific Research and professor at the École des hautes études en sciences sociales. He is the author of numerous books published in twenty-nine languages, including Ecosocialism: A Radical Alternative to Capitalist Catastrophe, Marxism and Liberation Theology, Fatherland or Mother Earth? and The War of Gods: Religion and Politics in Latin America.