Brazil: Dilma to Be Impeached, The Left Braces for a Hard Right Turn 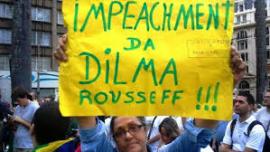 Brazil’s president, Dilma Rousseff of the Workers Party (PT) will very likely be impeached today, leading to her immediate, temporary removal from office and to a trial that could remove her permanently. Waldir Maranhao, the acting speaker of the lower house, had annulled the impeachment process just a couple of days ago, but then Renan Calheiros, the head of the Senate, said that he would proceed with the impeachment anyway, and it is going forward. This impeachment, which the left calls a kind of golpe de estado or coup d’état could be the end of Dilma’s presidency and the beginning of a new rightwing government that will impose greater austerity and do so by repressing the social movements.

Brazil is in the midst of its most serious political crisis since the the military dictatorship that began in 1965 and with the return to democracy in 1985. Hundreds of thousands have in recent weeks joined in massive marches against Dilma’s government, calling for her removal. Rightwing judges, politicians, the media have been working for months to see her impeached her for her alleged inappropriate handling of the nation’s finances—though those politicians who have accused her have themselves been investigated for far more serious crimes of embezzlement and fraud. Investigations called Lava Jato (Car Wash), have implicated dozens of politicians, but, even before the current wave of enquiries, members of the administration of former President Luiz Inácio “Lula” da Silva, and the president himself, had been found to be involved in corrupt practices.

President Dilma Rousseff, a former leftist guerrilla—imprisoned and tortured under the military government—first assumed the presidency in 2011, succeeding Lula, founder and leader of the party for decades and two-term president. Created by militant labor and social movements in the 1980s, the Workers Party during Lula's presidency adapted to parliamentary politics, engaged in political payoffs, and proved adept at neoliberal economics accompanied by social welfare programs. Under Lula, the country’s banks and corporations prospered even during the Great Recession while the Workers Party government pushed through congress programs to redistribute wealth to assist the poor—without changing the system that produced them. But Rousseff took power during an economic downturn, and her turn to austerity has only made the situation more difficult.

Taking advantage of the president’s discomfort, Eduardo Cunha, the former speaker of the lower house, led the attack on Dilma and the PT, but he has now been suspended from office while his wrongdoings are investigated. Cuhha is a leader of the Brazilian Democratic Movement Party (PMDB), created by the military dictatorship as the official opposition party. Brazil’s vice-president Michael Temer is also a member of this party, and if Dilma is impeached, he will assume the presidency. The PMDB, to which both of these men belong, is an alliance of regional oligarchies with no real program for the future of the nation and principally acts to defend its constituents’ economic and political interests,

With Rousseff facing impeachment, the PT leadership contemplates calling upon Lula to run for president—if he is not indicted and imprisoned. There is the problem, however, that Lula’s and Dilma’s policies have over the last 13 years turned from social liberalism and redistributive programs to policies of greater austerity. Consequently the PT has lost support among its traditional bases of organized workers and the urban and rural poor.

The question facing the left then is: How to resist the right without supporting Rousseff, Lula, and the Workers Party? More specifically, how should the far left relate to the various coalitions that have been formed to resist the right?

The PT has organized its own coalition, Frente Brasil Popular, made up of dozens of popular organizations, including such important groups as Via Campesina, but, most important, it includes the two largest labor federations: CTB (Central dos Trabalhadores e Trabalhadoras do Brasil) and CUT (Central Única dos Trabalhadores). The far left hesitates to join this coalition because it defends Lula, Rousseff, and the PT and, of course, doesn’t criticize the ruling party’s faults and failings.

There is another front, however, called Povo sem Medo or People without Fear, that was initiated by the Movimento dos Trabalhadores sem Teto or Movement of Homeless Workers (MTST). This coalition, also made up of many popular organizations, is independent of the PT government, and its posture of defending democracy but not the government makes it attractive to the far left. Some sections of the Party of Socialism and Freedom (PSOL), for example, back the Povo sem Medo coalition.

At the same time, far left parties—Party of Socialism and Freedom (PSOL), the Brazilian Communist Party (PCB), and the United Socialist Workers Party (PSTU), which often join together in electoral coalitions, are working together make a new coalition of their groups called the Left Socialist Front (Frente de Esquerda Socialista) into a more activist organization in society. The founding congress took place on March 23 with the participation of 500 members from the three participating organizations. They are committed to making a campaign to build the both in the elections and in the streets and social movements.

Much of what happens politically will depend ultimately on the labor and social movements. The two large labor federations already mentioned, the CTB and CUT, have become business unions that work in partnership with the employers, and they are discredited as well in the eyes of some by their connection to the Workers Party. Some former CUT unions have been leaving the federation are now joining either one of two alternative federations: CSPConLutas or Intersindical.

There are in Brazil an enormous number of community organizations, ethnic associations, feminist groups, and environmental organizations; and though many of them are affiliated with the Workers Party, there are also many independent groups. The events of June 2013, when millions took to the streets to protest government policies, showed the enormous potential of this movement, though at the moment there are no such mass movements.

Brace for a Hard Right Turn

Temer of the PMDB, once he assumes the presidency, will be looking for political allies, and he is mostly like to find them in the center-right Brazilian Social Democratic Party (PSDB), the party that has been the main opposition to Lula, Rousseff, and the Workers Party for more than a decade. The party’s symbol is colorful toucan parrot with its huge yellow bill and its leaders are called toucans. Recently the PSDB voted to cut the education budget for children’s lunches, leading the left to joke: Question: “What is eating the children’s lunches?” Answer: “The toucan.”

With the PMDB and the PSDB dominating the congress, not only children’s lunches, but all progressive social legislation will be threatened. The government can be expected to take action against the interests of the left political parties, the labor unions, and the social movements. Under such a government, social conflicts—such as the occupation of the schools now taking place in Rio de Janeiro—will be handled by the authorities with greater violence. Brazil is making a right turn and the left will be hard pressed to defend its parties, its unions and movements, and the country’s working people and poor.

Posted May 11, 2016 Brazil, Electoral Politics by Dan La Botz
About Author
DAN LA BOTZ is a Brooklyn-based teacher, writer and activist. He is a co-editor of New Politics.