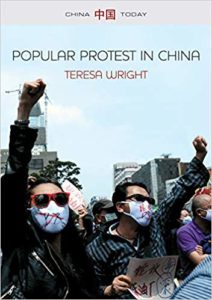 Teresa Wright’s concise but comprehensive overview, Popular Protest in China, has only become more relevant in the year since it was released—but events have also already dated it in ways that are politically revealing. Her closing chapter is on Hong Kong, where six months of sustained mass protests have now faced the Chinese state with its greatest challenge since 1989.

Wright reveals, if not necessarily intentionally, economic liberalization since the immediate “post-Mao era” resulting in social displacements that have in turn sparked protests—and has therefore been concomitant with the rise of an advanced police state. This trajectory, now being deepened under Xi Jinping, contradicts the conventional wisdom that economic liberalization would also mean political liberalization.

The guarantees for freedom of speech and assembly in Deng Xiaoping’s 1978 constitution were put to the test in the Democracy Wall movement which began that year. But the door was closed again when those guarantees were weakened in the constitutional reform of 1980. Student protests in 1986 and ’87 presaged the massive movement of 1989. Contrary to the popular perception that this was entirely a student upsurge, the movement also began to spread to the broader masses, with formation of the Beijing Workers’ Autonomous Federation, or BWAF. Of course, this door slammed shut decisively with the Tiananmen Square massacre of June 4, 1989.

In the subsequent years, political space closed and the police apparatus expanded—as private capital was given ever-greater precedence in the economy. Already in place under Deng, this tendency advanced under his successor Jiang Zemin, with his “Three Represents” doctrine, emphasizing “advanced productive forces” (read: private enterprise).

Wright discusses eight broad categories of protest that have emerged in the generation since then, marked by breakneck modernization without political freedom.

She first turns her eye to rural protests. A widespread practice of “illegal land sales” has expropriated farming communities of their patrimony, leading to a wave of “disturbances” and “mass incidents” in the countryside.

Labor protests meanwhile sporadically erupted in the cities, industrial areas and free-market Special Economic Zones (SEZs). During the 1989 protests, self-declared worker autonomous federations, or WAFs, started to emerge in several cities beyond Beijing, posing a threat to the official hegemony of the All-China Federation of Trade Unions (ACFTU). Again, this was rapidly reversed in the repression following the Tiananmen massacre. But labor unrest (by definition wildcat) would mount over the following generation.

Anger was galvanized after China’s equivalent to the Triangle Shirtwaist Factory fire—the disaster at the Zhili toy factory in the Shenzhen SEZ in 1993. As at the 1911 disaster in New York, bosses had locked the doors, so workers were trapped as the factory was engulfed in flames. Some 200 were killed.

This was in a private factory, but the distinction between the public and private sectors began to erode in this period, as decrees mandated that state-owned enterprises (SOEs) had to be profitable. This transition saw the rapid erosion of the Mao-era social contract known as the “iron rice bowl,” which had guaranteed workers job security, steady income, and benefits. Daqing, in the northeast industrial belt, saw mass protests by oil workers demanding back pay in 2002.

Wright next turns to homeowner protests, which manifested a contradiction in the expansion of private property rights. Residents often became legal owners of their domiciles, but also faced growing threats of displacement as urban areas hypertrophied. This led to the phenomenon of “nail houses”—lone properties left standing amid huge development blocs, whose owners stubbornly refused to sell.

China’s astounding economic growth in this period took a terrifying ecological toll, most dramatically seen in desertification, and contamination of groundwater and croplands with industrial pollutants, resulting in the phenomenon of “cancer villages.” This has led to a wave of environmental protests—hundreds of “mass incidents,” mostly in the new industrial zones of the southern coast. The most famous of these was the 2007 outbreak of protest against a planned chemical complex in Xiamen. The Xiamen plant was cancelled, and a Ministry of Environmental Protection formed the following year. Upon assuming power in 2012, Xi Jinping crafted a new environmental protection law, and began speaking of the need to build an “ecological civilization.” But protests against chemical plants, waste incinerators and the like have continued to sporadically erupt.

Official policy again resulted in new challenges for officialdom when “patriotic education” (emphasizing nationalism rather than class struggle) was employed as a “new foundation to buttress the regime’s weakened legitimacy” after 1989. Especially with the advent of the internet as a new stage for autonomous organizing, this paradoxically resulted in outbreaks of “nationalist protest,” when it was perceived that the regime was too conciliatory toward foreign powers. There were anti-US protests in 1999 after Washington’s warplanes bombed the Chinese embassy in Belgrade (supposedly by accident). These were followed by anti-Japan protests in 2005, sparked by Japanese revisionism over World War II atrocities in China, and then again in 2012, over the contested islands known to the Chinese as the Diaoyu and the Japanese as Senkaku.

Even after the 1989 crackdown, what Wright calls “political protest”—that is, pro-democracy agitation—has continued, although mostly on the internet rather than in the streets, isolated from the masses, and met with speedy reprisal. Most famously, dissident Liu Xiaobo’s online declaration “Charter 08” resulted in his imprisonment until his death (from untreated cancer) in 2017.

A far greater threat to the state has come from what Wright calls “ethnic minority protest.” The Uighurs, the Turkic and Muslim people of Xinjiang in the far west, have periodically exhibited separatist aspirations over the past century, and the regime obviously fears a resurgence of this. The 1980s saw episodic protests in Xinjiang’s principal cities, Urumqi and Kashgar, and 1997 saw the uprising and harsh repression at the town on Yining (known to the Uighurs as Gulja, Wright fails to mention). The government later adopted its “Open Up the West” campaign, encouraging massive Han colonization of Xinjiang—and deepening Uighur anger. Wright goes on to mention the sporadic violent attacks by Uighurs on Han Chinese and officials—but not the horrific mass detention of perhaps a million or more Uighurs in “re-education camps.” This grim reality was presumably coming to light just as Wright’s book was going to the printer.

Wright notes the 2008 uprising in Tibet, which again manifested anger over Han colonization and favoritism in the region. She also touches on the lesser-known protests by ethnic Mongols over the enclosure of their traditional grasslands for mining projects and the like.

And finally—Hong Kong. Wright discusses two important precursors to the current crisis in the semi-autonomous metropolis: the 2002 protest movement against a draconian “subversion law,” and the 2014 “Umbrella Revolution” to demand “universal suffrage” (an executive and legislative council directly elected without candidates vetted by Beijing). While Beijing succeeded in “waiting out” these protests, obviating the need for the kind of massive repression seen in 1989, Wright presciently notes that the “underlying causes” of these upsurges remained unresolved.

Wright concludes that “[u]nlike Han protest” in the mainland (as distinct from that of the Uighurs and Tibetans), in Hong Kong there is a “real threat of collective contention” to China’s ruling party-state. And she hints at the potential for such contention to spread to the Han majority. State strategies to contain popular protest since 1989 “may have sown the seeds for greater regime-threatening unrest.” 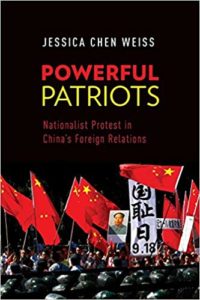 Shedding particular light on state management of nationalist protests is Jessica Chen Weiss’ Powerful Patriots, published four years earlier. Such protests have sometimes been a “diplomatic asset” to the regime, providing moral authority in demands on foreign powers. But any upsurge of protest poses an inherent threat in a closed society. The student pro-democracy protests of 1986 and ‘87 that presaged the Tiananmen Square movement were themselves presaged by a wave of anti-Japan protests in 1985—which actually saw students marching on Tiananmen in September of that year. So it isn’t surprising that a new wave of protests over the Diaoyu/Senkaku islands in 1996 was repressed. On the other hand, the 2012 protests over the question were tolerated, as they assisted Beijing in opposing Tokyo’s “nationalization” of the disputed islands. The risk remains, however, that any autonomous mass action could morph from a “tactical asset to strategic liability.”

Nationalism is entering the equation of power in another way that neither Wright nor Weiss anticipated. A schism of national identity between Hong Kong and the mainland has become inescapably apparent in recent months, with the protesters increasingly rejecting union with China altogether. Although their formal demands are merely for withdrawal of the unpopular “extradition bill” (now achieved) as well as “universal suffrage” and dropping of charges against arrested protesters, their rhetoric reveals a growing pro-independence sentiment. Disturbingly, many of the protesters wave the American flag, seemingly look to Trump as their protector, and even display nostalgia for British colonial rule over Hong Kong. This, of course, abets Beijing’s propaganda that the protests are foreign-fomented.

Most frustratingly, the months of the current Hong Kong protest movement have seen new outbursts of mass protest in mainland China. In July, a month into the Hong Kong movement, riot police were mobilized to put down anti-incinerator protests in the central China city of Wuhan. That same month saw worker protests over wage arrears in the automotive sector in Hubei. Then, in November, the local riot squad was again mobilized to break up an anti-incinerator protest in Wenlou, Guangdong province—just 60 miles from Hong Kong.

Throughout these months, the Hong Kong protesters have shown greater interest in appealing to the US and Britain for succor than building solidarity with protesters in the mainland. Yet it is hard to imagine that the Hong Kong protesters will achieve their aims—be they only for greater democracy in the territory or for actual independence—without some kind of democratic opening within China. Similarly, Beijing may be taking such a hard line on the Uighurs and Tibetans, in part, out of fear that the contagion of unrest could spread to the Han masses, and inter-ethnic solidarity against the ruling party-state could emerge.

Building that kind of solidarity, and somehow uniting the disparate and mostly spontaneous protest movements in China, holds the only hope of mounting a real challenge to the current system of capitalist totalitarianism that is, unfortunately, providing a model for despots around the world.