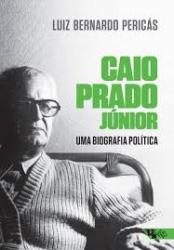 Pericás’ Caio Prado is a well researched, well documented biography of Caio Prado, the renowned and important Brazilian historian. This biography is distinguished by the author’s concern to present Prado not only as a Marxist intellectual but also as a member of the Brazilian Communist Party (PCB) and a committed political activist–and to show the relationship between the two. The author argues that Prado’s politics were integral to his work as a historian.

Certainly anyone who reads this book, whether or not they were already familiar with his career, will learn a great deal about Prado. Born in 1907, Prado was a child of one of São Paulo’s wealthiest families, educated as a child in Brazil and England, he graduated from law school in 1928, though he never practiced law. He became active in the Democratic Party (PD) and was arrested in 1930, but within two years had joined the Brailian Communist Party (PCB), remaining a member until he died. In 1935 he became the president of the National Liberation Alliance (ALN) a broad opposition group led by the Communist Party. He was elected to the state legislature in 1947, his only elected post.

Throughout the period from the 1930s to the 1960s he was a Communist Party second-tier leader, arrested and imprisoned several times. He used his wealth to create and finance leftwing journals and publishing houses, while as a Marxist intellectual he contributed his intellectual training and talent, writing both party pamphlets and academic studies of Brazilian history. He remained throughout his life loyal to the Stalinist Communist Party and after the death of Stalin to bureaucratic Soviet communism. In his books The USSR: A New World (1934) and The World of Socialism (1962), following visits to the socialist countries, he praisd Communism in the Soviet Union, the Eastern European Communist nations, and China, while lauding Cuban Communism in other writings.

Yet in his historical writings, particularly in his most important works, the Formation of Contemporary Brazil (1942), the Economic History of Brazil (1945), and The Brazilian Revolution (1936), Prado developed an analysis of Brazilian history that was at odds with the Soviet Union’s and the Brazilian Communist Party’s views. His commitment to his own interpretation of Brazil’s history brought him into conflict with the PCB leadership, so that he was sometimes accused of being a Trotskyist or a Maoist (he was neither of those) or at other times of being a reformist.

Prado argued in Formation of Contemporary Brazil that Brazil’s history could only be understood if we grasped “o sentido da colonização,” that is, “the meaning of colonization.” Prado understood colonization as a more than an economic system that produced products for the European marke; for him it was also a system of political and religious institutions, as well as a unique culture. Prado’s method meant that among the historians of his generation he paid more attention to international economic relations and to the slave trade, slavery, and racism than did most academic or Marsist historians of Brazil (excepting Gilberto Freyre, author of The Masters and the Slaves: a Study in the Development of Brazilian Civilization, 1933). For Prado, Brazil’s development was characterized “instability” as the country passed through economic cycles in which it advanced and then degenerated.

Such views contradicted the Stalinist Communist conception of development (taken from earlier Social Democratic models) that looked almost exclusively at the economic system as society progressed through certain predictable regular stages, from slavery, to feudalism, to capitalism. The Communists held the view that Brazil was a society with feudal characteristics, and therefore the working class had to ally with the bourgeoisie to overcome feudalism and enter a capitalist stage of development before fighting for socialism. Prado rejected the existence of continuing feudal elements, arguing that Brazil was a country of wage labor integrated into the capitalist world. Similarly, while the Communists argued for an alliance with the national capitalist class, Prado believed that the national bourgeoisie was integrated into first British and later American imperialism.

The author using a wide variety of sources narrates Prado’s life, gives brief summaries of his major historical works in passing, and describes briefly the major intellectual and political debates in which he was involved. Yet, while Caio Prado is a model of academic research and documentation, the writing is often tedious—given over to listing. There are Prado’s lists of publications, people he knew, events in which he participated, cities he visited, books in his library, magazines he received, etc.—and at times in its discussion of political disputes or of the reception of Prado’s books is pedantic.

Most problematic, however, is the author’s failure to go beyond narration and to critically analyze Prado’s thinking and action at many key points in his life and in the history of Brazil the international Communist movement. While Pericás makes clear by making a remark here or there that he is critical of Prado’s thoroughly Stalinist politics, yet he never pauses to reflect on those politics and provides the reader no incentive to do so.

Without going into detail, suffice it to say that the author has almost nothing critical or insightful to say about Prado’s relationship to Luis Carlos Prestes, the heroic and charismatic leader of the “lieutenants’ revolt” of the 1920s and later of the Communist Party. Pericás offers no insight into Prado’s acceptance of the Stalinist suppression of the opposition, the show trials of the Old Bolsheviks, or the forced collectivization of agriculture and the forced march to industrialization over the corpse of the Russian revolution. The author offers us only one sentence: “There was no questioning or public criticism by the Paulista intellectual regarding the years of Stalin’s consolidation of power, nor of the human costs of the five-year plan.” (p.  84) While this is true, it fails to ask why Prado was no unquestioning, what that said about his politics, about the Brazilian Communist Party, and about the Communist movement more generally.

Similarly with so many other issues where there is hardly even a sentence suggesting that there is something worth talking about regarding issues such as: the Communists strategy vis-à-vis Gertulio Vargas’ dictatorship and the Estado Novo, the Popular Front, the USSR-Yugoslavia controversy, Khrushchev’s 1956 speech to the 20th Congress of the CPSU, the crushing of the Hungarian Revolution in 1956, the theory of peaceful co-existence, the Sino-Soviet conflict, the Cuban Revolution, and the suppression of the Czechoslovakian Revolution in 1968 which Prado at first criticized in a letter to the Soviet government but then refused to publicly speak out about, remaining a member of the Communist Party. All of these issues and Prado’s positions are described, and some at length, but the questions are not contextualized and illuminated for the reader. Even in dealing with Prado’s intellectual work, Pericás gives only brief remarks that fail to explain the significance of his ideas for his time and for ours.

Prado’s life was a contradiction. His Stalinist politics blinded him to the realities of the Communist societies. Yet as a historian he developed a complex and subtle analysis of Brazilian history anticipating the new “new history” from below of the 1960s. While he acquiesced to the Communists’ political line in every period, he strongly defended his own interpretation of Brazilian history, even when it came into conflict with the party line.

Luiz Bernardo Pericás’ Caio Prado Júnior is a useful book that belongs in university libraries, but it is not the kind of analytical and critical biography that one wants when we are dealing with such an important, complex and contradictory intellectual and political figure.

Posted May 15, 2016 Brazil, Left Politics by Dan La Botz
About Author
DAN LA BOTZ is a Brooklyn-based teacher, writer and activist. He is a co-editor of New Politics.