More than three hundred Mexican American community activists marched through New York City from Union Square to the United Nations on April 26, marking the seven-month anniversary of the killing of six and forced disappearance of 43 students from the Ayotzinapa Rural Teachers College in Guerrero, Mexico.

Led by parents and surviving students from Ayotzinapa, the marchers–mostly New Yorkers, but some from as far as San Diego, California–carried portraits of the slain students and poles bearing paper flowers that had been made by the missing students’ mothers. They marchers carried posters proclaiming in Spanish, “They were taken alive, and alive we want them back.”

Parents have criticized the Mexican government for its failure to investigate the crime and for the complicity of governmental authorities and the police in the violence. Since September 26 when the killings and kidnappings occurred in Iguala, Guerrero, there have been scores of protests throughout Mexico, many of them large and militant, as well as demonstrations in South America, Europe, and the United States. Parents, surviving students, and community members have taken their cause to the European Union and the United Nations.

The New York march was part of Caravan43, a coalition of hundreds of Mexican American community organizations as well as other groups that brought some parents and surviving students to the United States in separate tours on the West Coast, in the Midwest, and on the East Coast. A group of parents of the Ayotzinapa victims are now planning on going on to South America and to Europe to continue to bring their cause before world public opinion. 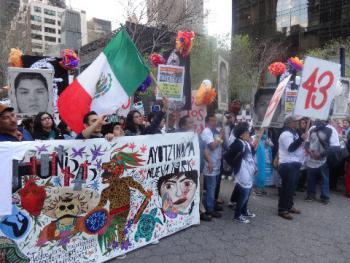 Posted April 27, 2015 Mexico, Social protests by Dan La Botz
About Author
DAN LA BOTZ is a Brooklyn-based teacher, writer and activist. He is a co-editor of New Politics.