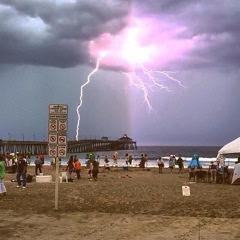 I awoke Saturday morning to rain on the roof. I am staying at my sister’s place in my hometown of Imperial Beach at the southwest end of San Diego County on the Pacific Ocean and the Mexican border. I could not at first identify the sound, the crackling of the rain on the awning of the patio just outside my bedroom window. Half asleep, I wondered at first if there might be a fire, then if some machine was running, finally I recognized that it was water and speculated that something might be leaking; perhaps there was a broken pipe. It never occurred to me that it could be raining because when I grew up here from the late 1950s until the late 1960s, it only rained in December and January. Now there is rain in July.

My wife Sherry and I got up and walked a few blocks to the estuary of the Tijuana River in the virtual miracle of a light summer shower in San Diego. Now the estuary park, when I was a boy in high school we called it “the sloughs.” The sloughs contain a fascinating environment of plants that must live in both fresh and salt water as well as in the arid climate of San Diego. The bizarre plants seem to combine elements of seaweed and cactus, of sagebrush and swamp weeds. Though it occasionally became polluted by the Tijuana sewer system, I and the other high school boys sometimes swam in the Tijuana River, accompanied by little sand sharks. The mouth of the river emptied into the Pacific on the U.S. side of the border where in winter there could be and often still are huge breakers.

Walking along the sidewalk in Imperial Beach I remembered how fifty years ago when it rained—and then it only rained in December and January—one would immediately find tadpoles in the gulley alongside the dusty paths that served as sidewalks in our town. In the winter frogs abounded. Now there are none. Also gone are the horny toads as we called horned lizards that raced through the brush in the sloughs and the sand dunes on the beach. The demise of those critters was not the result of climate change, but of other developments that affected the environment: the laying of sidewalks and culverts, the increase in population density, herbicides and pesticides used on lawns, and who knows what other threat to the delicate balance of sun, sand, and salt and sweet water.

When Sherry and I got down to the beach we heard booming, which I presumed was cannon fire from the U.S. Navy ships off shore engaged in training exercises. But looking toward the Island of Pilón de Azúcar which sits off the coast toward the south, we could see lightning and realized that the booming was thunder. I had never in the many years I lived in and later often visited the San Diego area seen a storm accompanied by lightning and thunder. By afternoon, when we drove to Chula Vista to see a movie, the rain had become a full-fledged thunderstorm. Shopper and moviegoers jumped, startled by the thunder and gawked at the lightning, incredulous.

The latest storm was the result of a hurricane, one of a few this year that have powered up the coast from southern Mexico, then along the Baja California peninsula to the San Diego area. Ironically, the rain, which woke me up and led me to think about climate change is the opposite of the real problem in southern California and throughout much of the Southwest, which is drought.

Los Angeles is losing trees at an alarming rate. Laura Baurenfeind, principal forester for LA's Department of Recreation and Parks, says the city's parks have lost an estimated 14,000 trees in the last year due to the drought. Regulations intended to reduce water used for watering lawns threatens residents’ trees and bushes.

While I was surprised by the rain motorists driving through the Riverside National Forest on highway 15 were shocked and terrified when a forest fire jumped the highway and set their cars on fire. Motorists abandoned their flaming trucks and autos and ran from them in terror. “I've never seen anything like this before,” California Highway Patrol Officer Steve Carapia told the Los Angeles Times.

San Diego, dominated for years by the U.S. Navy and Marine Corps and the aerospace industry, is a very conservative town. Fox News may be the biggest influence on public opinion here and some of its commentators are climate change deniers. So it’s good to see that the San Diego Foundation issued a report that suggests that in the next 35 years it is likely that:

·      Wildfires will be more frequent and intense.

·      Native plant and animal species will be lost forever.

·      Public health will be at risk, especially among our elderly and children.

The Foundation’s report contains a number of suggestions of measures to be taken to respond to this critical situation, but mostly it presumes that nothing can be done to stop climate change. So build your house on higher ground, farther from the shoreline, for the salt water will be rising as fast as the fresh water table is falling.

Local residents seem most aware of this issue, the water problem: drought, dry riverbeds, falling water tables, and deeper wells. Walking through my old hometown I see that some of my sister’s neighbors have replaced lawns with gravel, concrete, or cactus gardens. Clearly some of these people have an environmental consciousness.

That environmental consciousness was demonstrated in the last election when Imperial Beach residents elected a transnational environmental activist, Serge Dedina, as mayor. Dedina, a surfer, has spent years explaining environmental issues and advocating for conservation of natural habitats on both sides of the U.S.-Mexico border. His election in a conservative area where Fox News reigns and climate change deniers advocate laissez-faire policies represents a positive development.

Still many San Diegans prefer to ignore the more serious problem, the central problem of climate change, which is the increase in greenhouse gases because of the constantly increasing number of cars on the road, as described in another San Diego environmental report by Tanaka Research and Consulting. While the Tanaka report proposes measures to reduce greenhouse gases from auto emissions, much like the San Diego Foundation report, it has nothing to say about the need to change the system that brought us to the environmental catastrophe that we, our children, and grandchildren will face.

The problem is not the symptom that rain falls out of season or that it doesn’t fall at all. The problem is not simply the growth in greenhouse gases produced by automobiles. The problem is that capitalism has proven to be a system that grows and expands at the expense of the environment. As environmental activists have been saying, what we need is system change if we are to stop climate change.

Posted July 19, 2015 Ecology, United States by Dan La Botz
About Author
DAN LA BOTZ is a Brooklyn-based teacher, writer and activist. He is a co-editor of New Politics.