An Auto Worker Writes to the CEO of Fiat Chrysler Automobiles 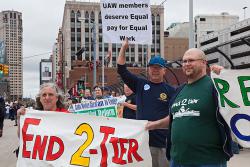 The United Auto Workers union (UAW) has reached a tentative agreement with Fiat Chrysler Automobiles (FCA) and is presenting the proposed contract to its members for a vote beginning this week. The contract affects some 40,000 unionized hourly workers.

At the beginning of the economic crisis in 2007 the UAW agreed to let Fiat Chrysler establish two tiers, that is, workers doing the same job would have different rates of pay, with newer workers sometimes working for $17 an hour while more senior workers might earn as much $28 an hour. Such a system had been introduced earlier in the auto parts plants.

The tier system is a particularly invidious invention since it not only generates resentment among workers who may be working alongside each other, but it is also an insidious practice because it provides an incentive for management to drive out the higher paid, more senior workers and replace them with their lower paid coworkers. Obviously such a system erodes the notion of union solidarity, which binds workers of different generations together, protecting the gains won in the past for all.

Sergio Marchionne, the CEO of Fiat Chrysler Automobiles has become notorious for his compensation, which reached $72 million last year, more or less. Marchionne is a tier one CEO, earning more than any other auto industry CEO in the United States or Europe.

The contract proposed by Marchionne would offer pay raises to both tiers—but second tier workers would not catch up to the first tier—leaving the invidious, insidious system in place. When senior workers retire, their first tier positions are simply eliminated. One report says that the FCA and the UAW may have created a three-tier system. In addition to the two-tier issue, the Detroit Free Press listed several other workers concerns as voting on the agreement approached:

·  Tier 2 workers cap? There is no limit on the number of FCA workers paid under the Tier 2 wage structure, which increases but doesn't catch up with the wage of those hired before 2007. In the previous agreement, FCA indicated it would accept a 25% cap on Tier 2 workers in the 2015 contract.

·  Healthcare: What, if anything, changes to workers’ out-of-pocket expenses for health care coverage?

·  Tier 2 concerns: What, if any, limits are there on FCA's ability to hire temporary part-time workers who start at a wage below Tier 2 workers?

·  COLA? The cost-of-living adjustment, which the UAW gave up several contracts ago, was not restored.

·  Why fewer tardies? Workers can be fired after the sixth time they are more than 30 minutes late, but they can use vacation days to offset the sixth incident. The previous contract allowed seven tardies before firing.

This tentative agreement is disrespectful. I feel insulted that the company even offered this to us. And even more insulted that the union thought this was a good idea to present it to our membership. I am absolutely befuddled by the fact that everyone is praising this deal. The UAW is saying we have made “substantial gains.” And you, Mr. Marchionne, have called this deal "transformational.” I call it a slap in the face.

Many of you in the public reading this may think that I am speaking out of greed. That simply isn't the case. You read things in the media. You see how Bloomberg and the Detroit Free Press report this. They say “substantial pay raises and bonuses” for everyone. And you think that we are just typical greedy union thugs who want more. No. We only want we deserve and what was promised to us in the past. Allow me to break it down for you.

Put yourself in my shoes. As a tier 2 employee, you read that I will make up to 25 dollars an hour. And the way it has been reported, they make it seem like one will go from 19 dollars an hour (which I am not making at this point) to 25. And, yes, that would be a substantial raise. But, the facts are, one would have to work for seven years to obtain that kind of increase. Nobody gets a 6-dollar an hour raise right away. And, while 25 dollars an hour is a good living, when you are working next to somebody who is making 30 dollars an hour, it can be quite disheartening.

So, I ask you this. If your employer told you that after working for 7 years, you will still make 5 dollars an hour less than the person working next to you doing the same job, how would you feel? Is it not disrespectful for the company to tell you that your time is worth less than the person next to you? Is it not disrespectful that one would have to work for 3 quarters of a decade and STILL isn't worth the same as their coworkers?

You wave these bonuses in our face as if they are significant. Allow me to break those down. Under the 2011 agreement, the company agreed to a World Class Manufacturing (WCM) bonus that would be paid 2 times a year based on the status level of the plant the employee works at. At the Toledo Assembly Complex, we are set to make Silver status under WCM standards. Which would mean 2 payments of 750 dollars every year of the contract. That is 1,500 dollars every year or 6,000 dollars over the course of the contract. That is under the 2011 agreement.

Under this new agreement, we will get a ONE-time payment of 2,000 dollars. That is 4,000 dollars less over the course of a 4-year contract. So I ask you Mr. Williams and Mr. Marchionne, where exactly are these “gains”?

You change the profit sharing bonus. You tell tier 2 employees that they could make substantial gains as long as the company is doing well. FCA would have to have a profit margin of over 10% for tier 2 employees to even come close to what our tier 1 brothers and sisters make. Considering FCA had a banner year in 2014 and our profit margin was only 4.1%, I look at this as a fantasy. I cannot feasibly see how the company can make that margin rise by two and a half times in the foreseeable future.

The fact that you wave 25 dollars (after 3 quarters of a decade) in front of my face with the “potential” to make a 12,000 dollar profit sharing check under the guise of this fallacy insults my intelligence. It says you do not value my time or sacrifice. You can keep your profit sharing. I want financial stability.

A strong middle class is the driving force behind any economy. When we have spending power, the economy grows. More jobs are created. People asking to be paid equally for equal work isn't the problem. CEOs who take 72 million dollar “bonus” checks on top of their already substantial CEO pay might be the issue.

And that isn't just an issue in the auto industry. In fact from 1978 to 2013 CEO pay has risen by 937%. You read that right. 937%. While workers rages have remained stagnant at a raise of 10.2 percent. So, I ask you this. Who is being greedy here? The guy who took a 72 million dollar bonus? Or the workforce who are simply asking to be paid equally for equal work?

To Mr. Williams and the rest of our union, I am sad to say that you let us down. You said at the public hug-fest that you had with Mr. Marchionne that “ultimately our membership” will decide. As part of that membership I will tell you that we will overwhelmingly reject this offer. Listen to your constituents. We are not happy. Remember which side you are on. And I ask you to please come back to us with a better offer. Please get us the things we were promised. Please do what a union is supposed to do. Get us equal pay for equal work.

To the public, many of you still will not understand. You see these numbers and would love to be in my shoes. And I understand that. My job really is a good job. With a good opportunity. But, when you work 10 hours a day for 6 days a week and you are told that at the end of this contract that you will be compensated fairly, and you work next to people who make significantly more money than you, you would feel disrespected by this offer as well.

To my brothers and sisters in this, please stay strong and together. I urge you all to vote with your best interests at heart. And IMO, this offer isn't it. We deserve a path to equal pay. And our brothers and sisters on tier 1 deserve a raise that they haven't seen in over a decade. In 2011 the union made painful sacrifices in order to keep the company afloat. And contrary to what they want you to believe, it wasn't the middle class who crashed the economy. It was deregulated banks and corporate greed. In 2011 we made the sacrifice because those banks hurt the auto industry. It wasn't the pay for its workers. 28 dollars an hour doesn't hurt a company that size. But, it makes a significant difference in the lives of those middle class workers. Let's stay together and get exactly what we were promised and what we deserve.

To Mr. Marchionne, you are a smart man. I doubt you will ever read this. But I hope this gets enough attention that you will at least hear about it. I hope you continue to lead the company forward. But, you have to show your employees that they matter. And offers like this are the antithesis of that. I want a happy relationship between the company and the union. You know what we deserve. I urge you to come back with a better offer.

Thank you to whoever took the time to read this. I will not respond to negative comments. But, I hope this gets some attention.