Angela Walker, an independent socialist, is running for the office of Sheriff in Milwaukee, Wisconsin, this coming November. Her campaign is part of a small trend of independent labor, Green Party, and socialist campaigns around the country that are discussed in a survey article by Dan La Botz in the forthcoming Summer issue of New Politics. Here La Botz interviews Walker to learn why she is running and what she hopes to accomplish.

New Politics – Angela, thanks for talking with me about your campaign. Tell me a little about your background.

Angela Walker – I was born in Milwaukee, Wisconsin on January 19, 1974. I grew up primarily on the North Side in what’s identified as the inner-city of Milwaukee. I lived on the South Side for a little bit, but mainly on the North Side with my mom. My mom was a school bus driver for a few years, she had some data entry training, and she went from job to job,. My brother and I are a year apart, and my sister was born when I was 15, when my mom re-married.

I went to a bunch of different schools. First, I went to elementary school at the Elm Creative Arts School and then to Roosevelt Middle School of the Arts. Somehow I ended up at Bay View High School which completely threw me off the arts track. I don’t know why I did that.

NP – Did you go on to college? 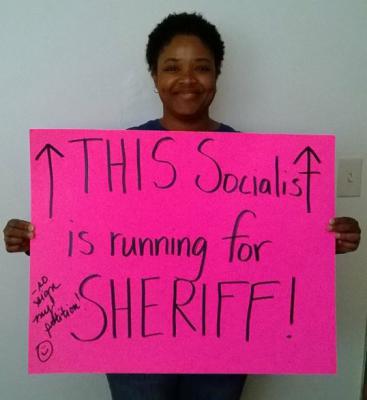 AW – Yes, I went to the University of North Florida in Jacksonville, studying history: American History, World History. I would have liked to specialize in African American and women’s history, but I didn’t continue. I dropped out in my last year because I could make more money as a bus driver than I could as a teacher. Plus I loved it. I drove for Greyhound for two years as a matter of fact.

It was quite an Odyssey. I drove for two years for Greyhound and moved to North Carolina and got married, and then I moved back to Florida and then to Milwaukee. I got back here March 1 of 2009. My husband I and separated. We’re in the process of divorcing as we speak.

NP – How did you get involved in politics?

AW – I got hired by the Milwaukee Country Transit System in November of 2009 and I was made legislative director of the union that represented the transit workers in 2011. I wasn’t looking for that position. I wasn’t in line for it. I was asked to do it.

There was so much unrest here in Wisconsin at the time because of what Governor Scott Walker did in stripping unions of their bargaining power. I began to go to the protests by myself because I believed in it. I had made some leaflets with information about the Koch brothers and what the Governor was doing and handed them out. So I had become known in my union for my activities.

AW – My predecessor didn’t train me, so it was basically: We’ve thrown you in the water, now swim. My thing is social justice, so I wanted to know, what kind of candidates are we endorsing? Where do they stand with the community? Is their approach holistic or is it single issue and that’s all they’re concerned about?

NP – What do you think you gained from your experience as legislative director?

NP – And what did you think of the legislators you met?

AW – Legislators….hmmmm….(laughing) a mixed bag. You have some people who are genuinely committed to reform and some who are getting a pay check.

NP – How long did you work in that position?

AW – For two years. I stepped down from that position in October of last year.

NP – How did you decide to run for Sheriff? And why are you running for that office?

AW – A very good friend of mine, a socialist like me, suggested the idea.

Our current sheriff, David A. Clarke, Jr. is an interesting character. He’s a very colorful character. He was just reprimanded by the District Attorney’s Office here for his lack of cooperation. He had made a statement about the D.A. being “soft on crime” and the D.A. fired back. Clarke engages in a lot of fear-mongering. He panders to a gun-loving, lock-‘em-up-and-throw-away-the-key base. It’s a particular concern to me, because Milwaukee County and City are still some of the most segregated in the country. We are greatly affected by mass incarceration issues. His messaging is not in line with what’s happening in the county.

I am running for sheriff because Milwaukee County is dealing with segregation and violence in the inner city, and these issues have deep roots that have only been glanced at in passing. I think that the only way we will finally move Milwaukee in the direction it needs to go is to be truthful about the role that capitalism and white privilege have played in making the inner city a permanent underclass.

Mass incarceration is a huge problem in Milwaukee. I am sure that you know that Wisconsin leads the country in incarcerating Black and Latin@ folks. Those folks come from Milwaukee County. Many of the prisons they end up in are out-of-state, for-profit institutions. Those institutions are not profitable unless they are full, so we've seen crimes that up until recently were misdemeanors become felonies. And I am sure you know that once someone is labeled a felon, it is much harder for them to find work, housing, and access to educational resources. So they re-offend, and the cycle starts all over again, with prisoners being used for cheap labor in positions that used to be held by union members. It's a dehumanizing situation. I want this system of commodifying human beings called out and ended.

I support the legalization and decriminalization of marijuana, with the same restrictions as alcohol, because nonviolent offenders make up a disproportionate percentage of this prison population. If legalization and decriminalization happen, these folks will have to be released. The prison system here in Wisconsin is capitalism at its finest, profiting off of the misery and marginalization of people who deserve much better. I think that my campaign will give me the platform to address this.

NP – If you were elected Sheriff, how would you conduct things differently?

AW – The way I look at the office of Sheriff is that there is a need for greater cooperation between that office and the county board, the police department; those relationships are extremely damaged under Clarke. I would want to repair that damage and work cooperatively with these agencies.

For me, criminal justice is an oxymoron. If you want justice, the first thing we have to be addressing is poverty, which is a major problem in Milwaukee, and understanding how poverty and the lack of a living wage keep people in the prison industrial system. The people who are being incarcerated are being incarcerated for profit.

Also with the passage of Act 10 which took away state employees’ collective bargaining rights you have prisoners doing work previously done by public employees and being paid little or nothing, so it’s very profitable.

I am supportive of the Living Wage Ordinance passed a few months ago by the Milwaukee County Board of Supervisors, which would require all contractors with the County to offer a minimum wage of $11.61 to those they employed. I realize that this does not go nearly far enough, but I support it as a measure that opens the door to the fight for a real living wage for all workers here. I believe that living wage work and the reinstatement of workers' collective bargaining rights will help to curb the violence in Milwaukee, the root cause of which is poverty.

Living wage and ending mass incarceration make up my platform, and I think that those issues will resonate with a lot of folks here. We'll be able to address a lot of other issues that stem from these, and build on the good work socialists did in this city decades ago.

NP – What's been the response to your campaign?

AW – I won’t be on the ballot until November 4. Clark is running against an opponent in the Democratic Primary. His opponent is Lt. Chris Moews, a lieutenant in the Milwaukee Police Department. I’ve talked to him on any number of occasions and he’s a good person. The media is concentrating on them.

NP – Are you a member of some socialist organization or an independent socialist?

AW – I identify myself as a free-range socialist. I’m very timid when it comes to joining organizations. I tend to do what I want. I know what I believe. I know what things make sense to me.

To me being a socialist means that we value things that are for the public good: having the proper income distribution, making sure that people aren’t doing without when others have more than they need.

I like the idea of workers owning where they work. I think it’s fair. I think people are more productive and get more job satisfaction when they own where they work. I was a transit worker and what I would have liked was to have a cooperative system where the workers and riders would have made decisions about how the system is run, and that is not currently the case.

I’m just a person and one of the things I hope for coming out of this race is that people will feel empowered, that they will say, “I’m not rich and I don’t have a thousand degrees behind my name, but I believe that I can help and I won’t be afraid to try.”