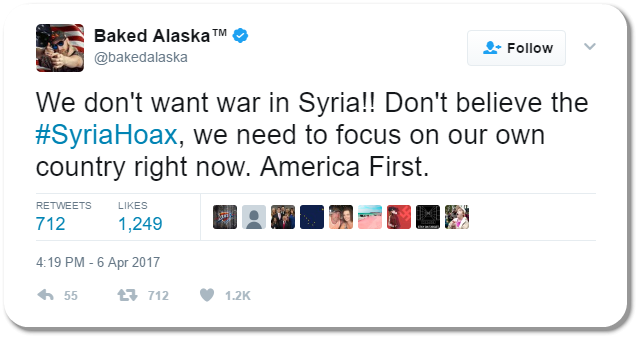 Looks to me that the ANSWER–IAC–UNAC rallies this weekend were a huge flop.  The biggest was in NYC on April 15.  The only article I could find that mentioned it was on a Chinese news service that said there was a protest of "hundreds." I saw one video of what I think was the whole crowd and it looked like 400 people. Hell, in 2003 we had hundreds of thousands.
In Washington, DC this past Saturday, it seems from this video there were about sixty marching; imagine, just sixty marchers in the national capital.  The video is narrated by medical doctor Margaret Flowers, who at one point (2:30) talks about a "staged chemical attack." In the Bay Area of California several hundred assembled.  In Chicago there were about twenty.  Their “big” rally, for some reason, is next weekend.
On Friday there was one in New Haven.  Around six of us went to counter-protest with flyers.  We expected ANSWER would have 100 people. They had about 20. One guy was holding Assad and Russian flags and had a large picture of Assad on his lapel.  In Greenwich, CT, a Friday rally got front-page treatment in the Greenwich Times, but the article (and ten photos online) made it all seem pretty pathetic. They said sixty attended at one point or another, almost all being in their 70s. One photo showed no more than twenty people sitting among a lot of empty chairs.
A Los Angeles march had maybe eighty people with many Assad signs.  Clay Claiborne spotted among the marchers one “Baked Alaska,” a notorious racist who had marched with the rest of the crappers in Charlottesville several months ago.
Remember, these rallies were the result of months of planning and organizing, with scores of groups sponsoring, and right after a bombing which should have gotten the blood up. What a farce.
The NYC rally seemed to be a mish-mash of all leftist causes, not as Assadist as the other ones, but some carried his flag and photo-bombed the speakers. Judging from the posters and banners of most of the rallies they seemed to stress alarm at the U.S. bombing of Syria (which has been going on since 2014) and the illegality of the strikes (that was true enough).  But was there any sympathy in any of the rallies for the Syrians who were gassed, or the Syrians who were merely shot dead or blown apart by bombs?  Was there any condemnation in any of these “anti-war” rallies of Russia-Iranian warfare on Syrians?
People are ready to get out massively for certain causes like #MeToo and gun control.  Clearly they’re not inspired by an “anti-imperialist” leadership which thinks this is still 2003, that the Arab Spring was just a nuisance and whose minds reject observable facts and prefer conspiracies.  It’s time for new leadership and new ideas. One person to listen to is Syrian-American Ramah Kudaimi who spoke on Democracy Now! on April 16.
Stanley Heller is Administrator of Promoting Enduring Peace and is active in RPM (Revive the Peace Movement Network, www.rpm.world).
Posted April 18, 2018 Left Politics, Syria, U.S. Foreign Policy, United States, War and peace by Jason Schulman
About Author
Stanley Heller is Administrator of Promoting Enduring Peace and host of the TV news magazine “The Struggle.” He’s author of “Zionist Betrayal of Jews: From Herzl to Netanyahu" and hosts the TV program “TheStruggle”. See https://thestrugglevideo.org Contact him: mail@thestruggle.org