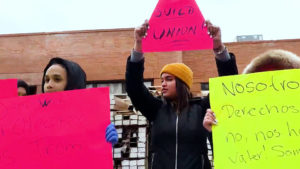 I believe that there is an ideological war going on right now and that the left needs to be prepared to do battle. In the very first days of this crisis, we saw moratoriums on evictions, expedited unemployment benefits, CA housing the homeless in hotels, and prisoners being released in OH. All of these measures showed that the market, profits and our repressive apparatus are not untouchable. This crisis has opened up questions of profit vs human need in fundamental ways.

But now that many of us are in isolation and the economic consequences are being felt — with unemployment predicted to reach 30% — there is an ideological backlash underway. Trump has said that the price may not be worth it. But he is not the only one. Increasingly, the mainstream media outlets are questioning the measures taken, arguing for more “surgical” approaches, saying that the economy cannot withstand this. This has been combined with confusing information on what it will take to fight the pandemic, if what we are doing will “work,” and how long it will continue.

And we cannot fool ourselves that these appeals will not resonate with people who are suffering and economically terrified right now. This is why a left-wing alternative, with a strong and unified message, is so crucial right now. We need to press it on all fronts. Here are my thoughts on what I think that needs to include:

1. The “economy” and fighting the pandemic are only counterposed if we accept the maintenance of profits, individual wealth and privatized production as inevitable. We have the resources right now to continue to feed and shelter people and meet their basic necessities. This could be met through a “shelter-in wage” for the duration of the crisis while freezing rent, mortgage and all debt payments so that wages are solely devoted to necessities.

All healthcare for the duration of the crisis should be underwritten by the government. Meanwhile, manufacturing and distribution firms should be directed by the government to shift all resources to essentials and to ramping up our medical capacity: protective equipment, hospital beds, testing capacity, ventilators and housing for the mildly ill. Those who are deemed essential should be given hazard pay, enhanced safety protections and enhanced labor rights and regulations to protect themselves.

Ultimately, this is an argument for a sharp curtailing of the powers of the banks and private industry and at least partial nationalization of sectors of the economy. It is the only way to meet the scale of the need. But this can be communicated through concrete demands that can make sense to millions of people in a moment like this.

2. The idea that the pandemic can be addressed “surgically” through measures targeted at “vulnerable” populations is a fantasy. It is out of touch with the reality of working-class life. The elderly (which in the context of the pandemic really means over 60) is not a rich, isolated subgroup of the population. They are raising grandchildren after children have died (remember we have a middle-aged death crisis in this country); well over 10 million senior citizens are still working, many at exhausting, low-wage jobs at a places like Wal-Mart; millions of senior citizens live in poverty, including 17% of Latinos and 19% of African-Americans; and massive numbers of the elderly live in multigenerational households where they are cared for by their working children. There is no way to quarantine this population separately; they are embedded in the fabric of our social and economic lives.

Beyond the elderly, this disease also targets a wide range of vulnerabilities — with obesity, existing respiratory illness, high blood pressure and diabetes topping the list. It is a minority of American households that do not have a member with one of these underlying conditions. We haven&sdquo;t yet seen what this virus does to a population as generally unhealthy as ours.

3. Our response to this crisis has been characterized by half-measures taken too late, then second-guessed, driven by the immediate crises presented by our lack of preparation. This has led to situations where we are told it is “too late” for testing to matter and where healthcare workers are told to ration protective equipment because we will run out.

Too frequently, the administrators and politicians have responded by changing the public health message to match the shortages and deficiencies. This is very dangerous precedent from a public health perspective. Instead, we urgently need to get ahead of this. This requires a non-partisan federal commission of the most knowledgable experts to learn from the international experience and coordinate a federal response. This should include the power to make binding recommendations for production needs.

4. Our social institutions and collective sense of social connection have been eroded by decades of neoliberalism. People&sdquo;s tendency to look out for themselves is often a “rational” response to a situation in which no one guarantees your safety, collective power has declined, and you have only yourself to rely on. We urgently need to rebuild a sense of social responsibility to one another — our lives literally depend on our taking actions that are difficult, but necessary to protect the whole.

As much as we might like, we cannot do this through moralism and exhortations. But we also cannot simply abandon the idea that we are responsible to one another. We do have agency. So we need to rebuild a social fabric from the ground up by looking out for one another, sharing information, providing resources and support.

At the same time, we need to articulate demands that make people see themselves as part of a broader collective. And perhaps most difficult, we have to rebuild some sense of collective power. Examples like the Amazon workers in NYC who fought going to work, or the threatened sickout of teachers, or nurses organizing for protective equipment — we need to amplify and expand these.

I saw Starbucks workers arguing that they should be considered non-essential — how do we support this? The more we can score some wins, the more we can build that collective fabric. But this will be hard and not always win. Part of our ideological battle is winning the argument for solidarity.

We need to be clear that arguments for “getting people back to work quickly” or “not letting the economy fail” are really arguments for letting millions of people die. We also need to be clear that there is no “going back” to the way things were. The question before us is whether our society is rebuilt on our terms or theirs. It is both an opportunity and a danger that we haven’t seen in decades.