American Communism and the Communist International – A Review 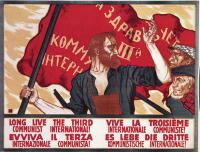 Jacob A. Zumoff has written an impressive scholarly tome that is perfectly described by the title: The Communist International and US Communism, 1919-1929. He makes a reasonably convincing case for a novel thesis that attempts to reframe the major question: the relationship between the Soviet and American Communists. Yet, in my view, he fails to address the central question, the Soviet domination of the Communist International, including its domination of the American Communists in the 1920s.

Draper, himself a former Communist who once wrote for the Communist Daily Worker, argued that the Soviet Communist Party tended to dominate the American Communist Party and set the line on all really important questions, while Isserman and other “revisionists” argued that the Communist Party of the United States was a genuine American party whose members reflected the experience of the American working class and who made their own decisions by and large. Draper and Isserman and other revisionists fought out these questions in a brilliant debate in the pages of the New York Review of Books in the 1980s (all still available online, but only to subscribers). Given the way that Draper and his critics seem to have covered the territory, is there really room for a new position and do the sources exist to support it?

Zumoff replies “Yes.” to both those questions. Zumoff believes that Draper and the revisionists are not so much polar opposites as two sides of the same coin, reflecting the Cold War and New Left environments in which they developed. Zumoff contends that the Communist International (CI) and the American Communist Party (CP) engaged in a dynamic dialogue that had shaped the most important decisions of the party’s early years. Moreover, he insists, the collaboration between the CI and the American CP leaders led to some of the most significant and meaningful work of the young party. The CI, he argues, had a positive impact on the American CP. Zumoff brings to the support of his thesis new sources, most important the archives of the Communist International that resided for years under lock and key in the Soviet Union until they were finally which opened in the 1990s and later copied and made available at research libraries around the world. He also uses other sources, especially memoirs, and has a command of all of the relevant secondary literature.

Zumoff’s list of the CI’s positive interventions in the American CP in collaboration with its American members includes: unifying the several original Communist Parties into one; convincing early Communists to give up their fetishization of illegal work and also to create a legal party; persuading the party, which had been principally based in the foreign language groups, to build an English-speaking, native-born American working class party; and, finally, to get the Communists to commit to working in the conservative American Federation of Labor. All of these, the author believes, turned the CP in the right direction. (The CI was also instrumental in getting the American CP to take the “Negro Question” seriously, though Zumoff is not happy with the end result of that intervention. By the late 1920s, the CI had convinced the Communists to see American Negroes as a people who in the South might constitute a nation and whose right to self-determination should be respected. Zumoff, however, links this position to the Stalinization of the American CP.)

With the exception of the CI intervention on the Negro Question, most of these developments had taken place by mid-1920s. The CI’s intervention in the American CP in the second half of the decade was largely a disaster. The CI’s agent Joseph Pogány, or Pepper as he was known in America, pushed the Communists into trying to take over the Farmer-Labor Party, leading to a split in which the Communists in the end found themselves isolated. Then, with Grigory Zinoviev in command, the CI carried out its policy of “Bolshevisation,” which aimed at creating a monolithic, centralized party with no factions, which Zumoff to his credit recognizes was a disaster, laying the basis for the party’s later degeneration into Stalinism.

The great problem of the later 20s was factionalism, the struggle between CP’s rival leaders and would-be American Lenins, particularly Charles Ruthenberg, Jay Lovestone, and William Z. Foster. Yet the factionalism was magnified many fold by the CI’s constant intervention either in favor of or against one or another of the American leaders. All of this leads us to question the general thrust of Zumoff’s argument, namely, that the CI’s intervention in the 1920s was generally positive. Well, maybe, but not after about 1923. (With the exception of the Negro Question, in my view, but that is a longer discussion than this review can encompass.)

The problem with Zumoff’s admirably researched and clearly written book is that it fails to engage what seems to me to be the central issue, the issue which made Draper’s books such classics, even if one disagrees with their anti-Communist thrust. That central issue is the question of Soviet domination of the American CP. How did such domination come about? The Russian Revolution of 1917, the first successful (even if only very briefly successful) workers revolution in history. Socialists, anarchists, and syndicalists around the world suddenly wanted to emulate the Russian Communists and their Bolshevik and soviet revolution, though nobody, as Victor Serge has written, had the slightest idea what Bolshevik and soviet meant. Lenin and the Russian Communists had prestige and used their authority to establish the Communist International. The creation of a new revolutionary international after the capitulation of the Socialist International to the war was an absolutely necessary step foward.

In the Communist conclaves, however, two dynamics took place: the Russian Communists, convinced that they had found the theory, organizational form, and political practice to make revolution, wanted to impress their model on others; while at the same time other socialists wanted to follow the Russian example and also wanted the Soviet imprimatur stamped on their party. While initially, given the reformist character of the European socialist parties, a reformism which in the test of revolution frequently became counter-revolutionary, the Russian Communist role may have been salutary, overtime it became an unhealthy tendency on the party of the Russians to dominate other political parties. The Communist International was theoretically a congress of equals, even if Russia was from the first primus inter pares, but by the mid-1920s the Russians had become the undisputed masters of the International. Zinoviev’s Bolshevization campaign, aimed at turning all of the Communist Parties in Europe and elsewhere into obedient clones of the Russian Communists was the second step in this process. Stalin’s counterrevolution in Russia, which overthrew whatever remained of workers’ power, put a new ruling class in power, and turned the International into an arm of its foreign policy was the final step.

But where, we might ask was the first step? Was it not in the Communist International’s intervention, sometimes well intentioned but misguided intervention, in the factions in the American CP as well as in other parties? One may argue that the revolutionary situation in Europe from 1918 to 1925 did not permit the Russians the luxury of a more democratic and fraternal engagement with the socialists, syndicalists, and anarchists of Europe and America at the time. Perhaps not, but the end result then was a more authoritarian and hierarchical international.

Zumoff’s book belongs in all research libraries and in big city public libraries. Professors who want to use it for a class or leftists who want to look back into our history will do better to wait for the Haymarket paperback edition which will be available at a reasonable price.

Posted February 27, 2015 Left Politics, United States by Dan La Botz
About Author
DAN LA BOTZ is a Brooklyn-based teacher, writer and activist. He is a co-editor of New Politics.