Alain Krivine, a French revolutionary socialist, died today March 12 at the age of eighty. A leader in the student and anti-imperialist movements of the 1960s, an important figure in the May 1968 upheaval in France, he was for many years one of the best-known figures of the French left. He was a leader of the Revolutionary Communist League (LCR) and after that of the New Anticapitalist Party (NPA). He ran twice for president in 1969 and 1974 and was later elected to and served in the European parliament serving from 1999 to 2004.

Alain Krivine was born July 10, 1941 into a family descended from Jewish immigrants who had fled the anti-Semitic pogroms of Ukraine, then part of the Russian empire. Alain recalled that his father Pierre, a dentist, was a person of the left, always voting either for the Socialist or Communist Parties. The Nazi occupation of France and the anti-Jewish laws forced his parents to take measures to protect the family, and they survived the deportations of Jews to work or death camps organized by the French Vichy government for the Nazis. Alain grew up hearing stories of the heroism of the anti-fascist Resistance. He and his three brothers all became leftists.

Krivine joined the Communist Party (PCF) youth group in the mid-1950s The Communist Party of that era enjoyed a reputation as an important component of the anti-Nazi Resistance during the war, as the leading political organization in the labor movement, and a political party of real significance in France. With its size and importance, the PCF was able to support many front groups and social organizations, including the youth group to which Krivine belong. Soviet Communism, which had expanded from the Soviet Union to Eastern Europe and China, proclaimed an ideology and rhetoric of democracy and socialism, which though utterly false, had a very real appeal to many young people.

At the same time, the PCF was perhaps the most Stalinist of Communist Parties in Western Europe, ignoring Nikita Khrushchev’s speech of February 1956 that had revealed Stalin’s crimes against the Russian people and supporting the Soviet Union’s crushing of the Hungarian workers’ revolution of October and November of 1956. The PCF was run in a thoroughly authoritarian and bureaucratic manner from the top down, bereft of democratic life.

Still, things were changing. In 1957, Krivine went as a delegate to the World Youth Conference where he discovered that the Hungarian youth representatives were all police agents and he learned that the Algerian delegation was critical of the PFC’s failure to support Algerian independence. Those were his first inklings of the party’s problems. 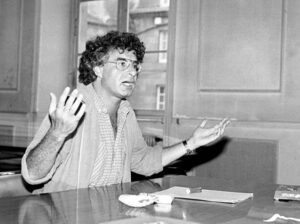 Shortly after his return to France, Krivine became more attracted to the Algerian independence movement and at the same time met Trotskyists who were involved in a clandestine organization—Youth Resistance—within the PFC youth group. It was over the question of independence for Algeria that Krivine for the first time broke with the PCF line, though he remained a member of the party. He wrote in his memoir, ironically titled, That Will Go Away as You Get Older:

The war in Algeria and my growing awareness of the lies about “real socialism” in the USSR led to the first crack in my world view: on the question of Algerian independence the PCF has been ambiguous and timid. Soviet society was not a workers’ paradise. Neither were the nations of Eastern Europe.[1]

Krivine soon became, as he writes, “one of the principal inspirers of the ‘Trotskyist-Guevarist,’ anti-Stalinist opposition among the young Communists, most of whose leaders had joined the Fourth International.” As an anti-imperialist activist, he began working with anti-war intellectuals such as the philosopher Jean-Paul Sartre and mathematician Laurent Schwartz.

In 1966, the PCF expelled Krivine and his fellow oppositionists because of their “factional activities.” Once independent they formed the Revolutionary Communist Youth (JCR). Now in the Trotskyist milieu, Krivine met the leading older figures of the movement such as Pierre Frank and Ernest Mandel. The young Trotskyists merged their group with Frank’s Internationalist Communist Party, the most important Trotskyist party at the time.

Krivine, in the course of his anti-imperialist work against the French war in Algeria and the U.S. war in Vietnam developed like many of his generation, a Third Worldist perspective, something that as very common in France and in fact throughout much of the developed world. While the European working class was still important to these leftists, the colonial independence struggles moved to center stage. As he writes:

Our most important reference among liberation struggles of the Third World was without a doubt the Cuban Revolution, which gave us our label, “Trotskyist-Guevarist.”….Above all, Che Guevara was in our eyes the ideal of a revolutionary activist.[2]

Alain Krivine and his comrades who became Trotskyists in the late 1960s had a significant impact on Trotskyism in France and on the Fourth International. On the one hand they revitalized Trotskyism, bringing hundreds of new activists and a fresh energy and enthusiasm to the movement. Some took industrial jobs and went into the working class in an attempt to win workers to socialism. At the same time, the turn toward Che Guevara’s ideas, particularly the theory of the foco, that is, a small group of committed revolutionary guerillas in the mountains or the jungle engaged in armed struggle, represented a significant turn from the historic Marxist idea of the central role of the working class as the agent of socialist revolution. Such guerrilla groups were often isolated form the working class, seldom democratic, and nearly all were defeated by rightwing military regimes.

This Trotskyist-Guevarist politics, adopted by other French Trotskyist leaders and shared by other sections of the Fourth International, had an important impact on the Fourth International and its theory of revolution, as I have discussed elsewhere.[3] Krivine and his comrades argued that the Vietnamese Communists led by Ho Chi Minh and the Cuban Revolution led by Fidel Castro and Ernesto “Che” Guevara had spontaneously and unconsciously developed a Trotskyist revolutionary perspective, that of permanent revolution.[4] Their conclusion begged the question: If one could stumble on the right path, why did one need a Trotskyist party or theory? And if Vietnamese Stalinist Communist Party and Castro’s Cuban déclassé revolutionaries could carry out socialist revolutions, why did one need the working class?

While taking their inspiration from Trotsky and Che, Krivine and his comrades were very involved in the French student movement in the universities. They also worked to try to connect the youth movement to the Communist-led unions, most importantly the enormous Renault plant a Boulogne-Billancourt. Krivine and his JCR comrades, working closely with Daniel Cohn-Bendit who played a significant role in the great May 1968 general strike of students and workers. May and June of 1968 represented the highpoint of the French radical movement of that era, during which Krivine was imprisoned twice for his radical activities, though he only served a relatively short time. All of this made him a very prominent figure on the left.

In 1969, Krivine ran for president of France as the candidate of the Communist League and a representative of the radical movement of May ’68, supported by such prominent intellectuals as philosophers Jean-Paul Sartre, Simone de Beauvoir, and novelist Marguerite Duras, but he received just 1.06 percent of the vote. In 1974, Krivine ran again but got less than 0.4 percent of the ballots cast. That same year Arlette Laguiller of Workers Struggle (Lutte Ouvrière), another Trotskyist group, won 5.7 percent of the vote.

Krivine remained active in France throughout the 1980s and 1990s, involved in every domestic and international issue of any significance. In 1999 he won the race for delegate to the European parliament.  In 2009 the Revolutionary Communist League (LCR) that Krivine had helped to found in 1969 dissolved itself in order to merge with activists from the new environmental and feminist movements, creating the New Anti-capitalist Party in 2009.

Alain Krivine, through it all, remained an anti-capitalist, a revolutionary socialist all of his life, and contrary to that common adage and the title of his memoir, he did not give up his leftist politics as he aged.

Posted March 12, 2022 France, Left Politics, Uncategorized by Dan La Botz
About Author
DAN LA BOTZ is a Brooklyn-based teacher, writer and activist. He is a co-editor of New Politics.