The 2018 National Prison Strike: A Movement Making its Mark 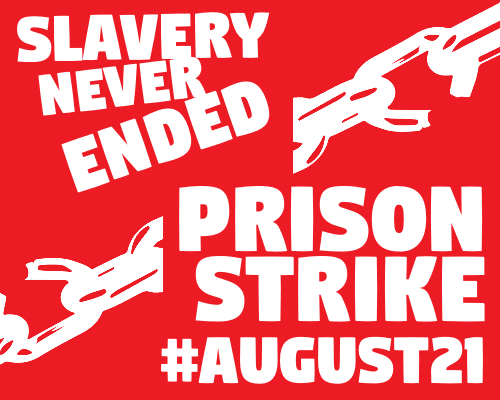 On August 21st, forty-seven years after the assassination of key movement organizer and theoretician George Jackson, prisoners across the country have once again begun mobilizing. Ranging from sit-ins to work stoppages, boycotts to hunger strikes, their actions have followed a nationwide call for sentencing reform, improved living conditions, greater access to rehabilitative programming, and an end to what strike organizers call “modern day slavery.”

In the weeks leading up to the start of the strike, women and men held in prisons, jails, and immigration detention facilities in at least 17 states had confirmed their participation, a number that is sure to rise as news of the strike continues to spread. Such a high level of involvement in this strike suggests not simply the continuation of, but also a potential upsurge in a prison movement that, as an informational video has put it, is “self-organized, independent, and fighting against the brutality of the prison system.”

Initiated by Jailhouse Lawyers Speak (JLS), a collective of those providing legal aid and support to other prisoners, this year’s strike highlights the movement’s growing sophistication. JLS, which first announced the strike via Twitter, intentionally picked dates that bridge the anniversary of Jackson’s killing with the start of the 1971 Attica prison rebellion on September 9th.

Previous national and statewide protests have demonstrated a similar political consciousness, indicative of organizers seeking to cultivate a sense of their movement’s place in history. The 2016 nationwide strike began on the 45th anniversary of the Attica rebellion (September 9th), the 2018 #OperationPush strikes in Florida coincided with the Martin Luther King Jr. holiday (January 15th), and the subsequent call for outside supporters to demonstrate fell on Juneteenth (June 19th), a holiday commemorating the emancipation of enslaved Africans in Texas following the end of the Civil War.

These recent actions have been just a few of the coordinated protests that have broken out in the years since the 2010 work strikes throughout prisons in Georgia as well as the 2011 and 2013 Pelican Bay hunger strikes. Building on the lessons drawn from these and other protests, this national call prescribes a set of actions to take and a three-week window of time during which to take them, in order to deny prison officials the opportunity to preemptively lockdown their prisons in anticipation of a one-day refusal to work.

Reflecting a growing operational flexibility, the national call also encourages those taking action to press concerns specific to their institutions, while also promoting a common set of ten demands. These demands include an end to felony disenfranchisement, poor prison conditions, racist over-charging and excessive sentencing, low — or in some instances, no wage — prison work policies, and repressive federal legislation like the 1996 Prisoner Litigation Reform Act (PLRA), a law designed to curtail the ability of prisoners to file federal lawsuits for violation of their constitutional rights.

“Most of the demands are not actionable items that prison authorities are able to grant,” notes a zine promoting the strike. “The goal is not to hold out and win negotiations with officials, but to last those 19 days and punch the issue to the top of the political consciousness and agenda.”

Although far from low-hanging fruit, these demands would still go a long way towards undercutting the inhumane and repressive environment in which many prisoners find themselves, and are thus worth the long-term struggle they would require. As an initial step in this struggle, organizers have made paramount raising public awareness about issues like the PLRA, which, while obscure to most, have significantly weakened any sense of prisoners’ rights.

The need to raise public awareness about the repressive laws and harsh conditions facing prisoners across the country became even more apparent in April of this year following a bloody riot in Lee Correctional Institution, a maximum-security prison long considered the worst in South Carolina. While describing the riot as likely “gang-related,” officials also acknowledged that they made no efforts to intervene for some seven hours, thus leaving at least seven prisoners stabbed to death and dozens more seriously injured in the deadliest incident behind bars in the past quarter century.

“Prisoners were placed in some really aggravated conditions,” said JLS spokesperson Amani Sawari, describing the events leading up to the riot. “They were placed on lockdown all day. They weren’t allowed to eat or use the bathroom. They were placed in units with rival gang members. And then their lockers were taken away, so they didn’t have any safe place to put their personal belongings, which really aggravated and caused tensions among prisoners — to the point where fights broke out, inevitably.”

JLS has initially planned to release its strike call in 2019, but instead launched it just weeks after the Lee riot in an effort to shift the public conversation back to the systemic issues — like chronic understaffing, prisoner overcrowding, and generally inhumane conditions — that many critical observers point to as the central causes of the riot. Earlier this year, for instance, an investigative report found that as South Carolina has failed to allocate more money to hire new guard or make headway on other conditions issues, the number of inmates killed in the state’s prisons “more than doubled in 2017 from the year before and quadrupled from two years ago.”

Considering these circumstances, JLS’s strike call should be seen as serving a dual purpose — shifting public attention back to the issue of the poor conditions behind bars, while at the same time redirecting the attention of prisoners back towards the need for unity. The potential of the latter was perhaps best exemplified during the Pelican Bay Hunger strikes of the early 2010s, as high-ranking prison leaders successfully hammered out an “agreement to end hostilities,” or protracted truce, as part of broader struggle against California’s routinization of solitary confinement.

“One of the things we’ve noticed in a number of different states, right now I can tell you at least 8 different states, we’ve seen truces being made by gang members, street organizations I like to call them,” offered a JLS organizer during a recent interview. “We’ve seen a lot of truces, they’ve been made across the lines. Obviously, we still have some flutters here or there, but the more it’s getting inside the prisons about August the 21st, the more prisoners are getting to the table, the more prisoners are talking.”

As the example of the Lee riot demonstrates, officials are all too willing to use the divisions amongst prisoners as a way to maintain control, even if these divisions devolve into violent conflicts. Consequently, forging a working unity across racial lines, religious persuasions, and gang affiliations is an essential aspect of prisoner organizing.

The start of the 2018 National Prison strike also fell on the anniversary of Nat Turner’s 1831 rebellion in Southampton County, Virginia, further connecting the ongoing prisoner-led resistance to the system of chattel slavery in ways both subtle and overt.

Recasting mass incarceration as “prison slavery” — usually by way of the Thirteenth Amendment — is perhaps the growing movement’s most innovative intervention. This terminology speaks to the various deprivations experienced behind bars, the movement’s base in states throughout the former Confederacy, and its long-term objective of prison abolition.

At the same time, “prison slavery” and its identification of poorly or unpaid labor as a central feature of mass incarceration, has helped organizers to attract the outside support of the Industrial Workers of the World (IWW). Best known for its service-sector unionization campaigns, the group has developed various methods for supporting inside organizers through its Incarcerated Workers Organizing Committee (IWOC).

These methods include using an outside contact available via cellphone to pass messages from one prisoner to another, as well as mailing newsletters with innocuous front pieces that belie organizing information printed in small type several pages later. These more creative methods have joined others, like word of mouth through prison transfers and well established prisoner-oriented publications, like the San Francisco Bay View.

The IWOC was an early endorser of this year’s strike and has played a crucial role in helping to spread information about it. At last count, over 150 organizations have now endorsed the strike, and solidarity demonstrations have already taken place in over 10 cities. Dozens more are planned for the next several weeks.

“From past strikes,” explained a JLS organizer, “what we did learn is that from the outside, the more people that tend to stand up, demonstrate from the outside, particularly demos at the prisons, what it does is it incites. It incites inside and this is why prisons have a problem against it.”

So the biggest thing that we can ask any of these groups or any organization is to hold some type of event, particularly an event that can get the radio’s attention, news media attention, anything that can get back into the jail cells and the prisons. The more radio programs that pick it up, the prisoners can listen to it. Particularly the prisoners that don’t have access to phones or internet access, they can at least get it while they’re listening to their radios or they can see it on television.

As the strike proceeds, one of the more pressing questions is whether or not the strike itself, along with the outside support it inspires, will not just make it through September 9th, but also further the development of more movement organizations on both sides of the wall. These sort of organizations, like Pennsylvania’s Human Rights Coalition or the Free Alabama Movement in the Heart of Dixie, often come out of intense moments of struggle and are generally best positioned to carry the movement forward — particularly within a society too often willfully blind to what takes place in its name behind bars.

Dr. Toussaint Losier is an Assistant Professor in the W.E.B. Du Bois Department of Afro-American Studies at the University of Massachusetts at Amherst. He is co-author of Rethinking the American Prison Movement with Dan Berger and preparing a book manuscript titled War for the City: Black Liberation and the Consolidation of the Carceral State.