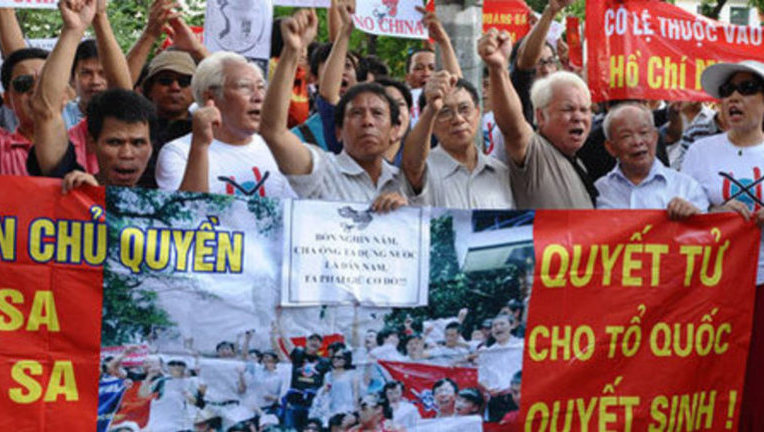 Why now, given that the idea of these three special economic zones was “old news”, having been announced in May 2017? It turns out that lack of transparency about the details of the Draft Law—made available only before a vote in the June 2018 session of the National Assembly—had triggered these massive protests.

Only once the details became clear did protests begin in earnest. The protesters pointed to the risks of losing national sovereignty to China, alleged to be the key beneficiary of the Special Administrative and Economic zones scheme. While China is not mentioned in the 53-page Draft Law, the geopolitics of these three zones, spread from north to south, suggests otherwise: Vân Đồn (Quang Ninh province, bordering China), Bắc Vân Phong (Khanh Hoa province, ashore of the South China Sea), and Phú Quốc island (Kien Giang province, near the Sihanoukville Special Economic Zone in Cambodia, dominated by Chinese–Cambodian investment). Visas are to be waived for “citizens of the neighbouring country [China] sharing the border with Vietnam in Quang Ninh” (Article 55, Section 4), and for “citizens of the neighbouring country [Cambodia] sharing the border with Vietnam in Kien Giang province” (Article 57, Section 3). Who else would stand to benefit the most from both economic and administrative control over land, air, and sea lanes from these three zones?

Indeed, why introduce more economic zones when Vietnam already has 18 economic zones, offering tax breaks and low rents, and which still have open spaces for foreign investors? A careful review of the text of this Draft Law reveals many ambiguities and raises grave concerns for the wellbeing of the Vietnamese workers and the environment for them, their families, and society at large.

Here are some reasons for my concerns.

First, the list of 131 approved businesses and industries for these three zones are not “green, high-tech, and knowledge-based” as stated goals; rather, they are completely the opposite. Technology transfer is mentioned only once in the 53-page draft law. Instead, hotels, tourism, casino, gambling and assembly work are prominently promoted in all three zones. Logistical controls over air, rail and sea transports are consistent with ongoing Chinese efforts to completely control the sea lanes in the Pacific Ocean.

Other approved businesses allow imports and exports of protected and endangered species listed on the appendices of the Convention on International Trade in Endangered Species of Wild Fauna and Flora (CITES; Appendix IV). Moreover, Appendix V (Toxic List) approves 16 additional industries that are highly toxic (such as nuclear power, metallurgical and metal ores using toxic chemicals, chemical fertilisers, leather tanning, recycling waste, and coal gasification). How can any work safety and environmental monitoring take place in these high-walled enclaves (Article 3), when the owners (the Vietnamese government and foreign investors) can keep secrets on these zones as they see fit (Article 13)?

Second, ambiguities and conflicting stipulations on privileges in these zones might prevent Vietnam from fulfilling ILO labour conventions promised in free trade agreements (FTAs). Especially important are ILO Conventions #87 (freedom of association), #98 (collective bargaining), and #105 (abolition of forced labour) required by the EU-Vietnam Free Trade Agreement (Chapter 15, EVTFA- [1]) and the Comprehensive and Progressive Agreement for Trans-Pacific Partnership (Chapter 19, CPTPP [2]). These FTA labour provisions are to be considered in the Labour Code Revisions to be submitted to the National Assembly by May 2019. [3]

For instance, the exception clause in Article 5, Item 5 of the Draft Law states that if there were a conflict between international conventions and higher privileges offered by this Draft Law to foreign investors or corporations with foreign investment (a common practice by Chinese investors using Vietnamese fronts), this law will take precedence. However, Article 5, Item 6 states the opposite. This ambiguity will create problems in implementing this law—benefiting foreign investors, and weakening the unions that represent and protect workers’ rights.

Third, foreign investors will have maximum control over their interests. Article 46, Item 2 permits them to recruit labour, exempts foreign experts/workers from permission to work for longer periods of time than in other zones in Vietnam, and uses their homeland laws and customs to govern their workers/employees (Article 6). What if these laws and customs contradict the rights and benefits of the Vietnamese workers? Overall, these privileges support a global pattern of Chinese migration to places where there are Chinese investment projects (such as Formosa company in Ha Tinh, Central Highlands bauxite, Cambodia, Laos, Myanmar, Sri Lanka, and South Africa).

Fourth, Vietnamese workers will have ambiguous or no protection for their rights and interests guaranteed in the Vietnamese Labour Code. Article 6, Item 1 mentions “the minimal rights of workers in the labour contracts” based on Vietnamese laws, but Article 46, Item 4, Point B and C give the Chairmen of these zones total discretion, such as to determine the “minimum wage” for these three zones (Article 46, Item 3). Who can guarantee that this level would not be lower than the national Minimum Wage law which is already not liveable? The chairmen also have the discretion to determine the levels of social insurance contributions and other social support for workers (Article 49). These ambiguities can release foreign investors from compliance with social insurance contribution for assembly workers in these zones.

While this Draft Law does not rule out the application of existing Vietnamese labour laws (such as the Labour Code, Trade Unions, and Social Insurance laws), failure to mention these requirements—as implemented in other export processing zones—breeds ambiguity and weakens the role of the Vietnamese General Confederation of Labor (VGCL) to represent workers’ rights in their own country. A Deputy Director of the Institute for Workers and Trade Unions warned: “The VGCL’s operation is confined to doing what is prescribed in the law instead of doing what the law does not prohibit. Therefore, anything which is not clearly stated in the law is difficult for the VGCL… Union leaders are confused and fearful and do not know how to deal with problems which are not specified or ambiguous in the law.” [4]

There are more loopholes in this 53-page Draft Law which give foreign investors virtual carte blanche control in these three “autonomous” zones. The Vietnamese workers and their children will be exposed to all types of toxic materials (Appendices IV and V) without protection by the VGCL nor work safety rights afforded to them in their own country. The promotion of casinos in these zones causes great concerns, knowing damages caused by the Boten casino in Laos (developed in 2003 and shut down in 2011 by the Chinese government) to the local residents.

In sum, casinos and toxic industries are not “high-tech, green, and knowledge-based.” The ambiguities that promise “minimal rights for workers” will not engender sustainable development and technology transfer in Vietnam. The National Assembly should listen to their citizens’ concerns in their deliberation of this Draft Law. If this law is passed, unchecked toxic industries and ambiguous union protection will endanger generations of Vietnamese workers and their families and the environment for everyone—since pollution does, of course, drift.

Examples from other ASEAN and South Asian countries (such as Boten casino, Myanmar’s Kyauk Pyu Special Economic Zone’s destroying local residents’ livelihoods, and the most recent Sri Lanka’s loss of their strategic Hambantota Port to China’s ownership for 99 years) should alert Vietnam to these risks. [5] [6] It should thus act in concert with these countries. Finally, solidarity with civil society organisations and global labour movements is needed to guard against the “race to the bottom” on workers’ rights.

Angie Ngoc Tran is professor of political economy at California State University Monterey Bay. Her research focuses on historical and contemporary labour movements in Vietnam. She is the author of Ties that Bind: Cultural Identity, Class, and Law in Vietnam’s Labor Resistance (Cornell University Press, 2013).