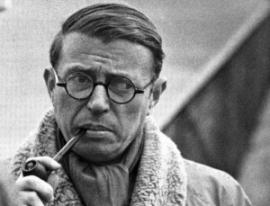 You just had dinner with your family and argued about the viability of the creation of socialism in the United States while fighting off their tired and false rebuttals of human nature as your uncle Steve got broccoli stuck in his teeth. Exhausted from the argument in a way that only your family can cause, you head to your home and get ready for bed. A notification appears on your phone that a new article from Jacobin.

Magazine has been published. You open it up and feel your jaw drop. The article title reads Why "Socialists Should Believe In Human Nature." All you can think is, “not them too….”

On April 12, 2017, Adaner Usmani’s article, “Why socialists should believe in Human Nature” was published by Jacobin Magazine. In the article Usmani puts forth 3 arguments against what he calls the “Blank Slate Thesis” and tries to convince us of why we should adopt a position of determinism.

Usmani claims, “the thesis that humans have no inherent human nature makes our moral project incoherent.” There are two problems with this claim. 1. Our project is based on some forever-unchanging essence that determines the actions of the human animal. 2. We now have a project that ascribes to some form of moralism. Both of these problems take away what should be the internal power to create a project with our own faculties, and chock them up to external made up ‘laws’ that rob us of our own self-creation. In the words of Sartre, unlike something that is created, “our existence precedes our essence,” and to ascribe to both nature and morality outside of ourselves is to allow our history to define us, instead of allowing us to define our history.

After making these mistakes, Usmani goes on to misinterpret Marx.

Using Marx’s demand at the end of the "Communist Manifesto": "Worker’s of the world unite! You have nothing to lose but your chains!"

Usmani attempts to say that it is human nature that allows the worker’s from all over the world to unite:

“This belief that these universal interests exist is rooted in a belief that humans universally are everywhere basically the same. You believe that people are meaningfully animated by their human nature whatever the influence of culture or history on them.”

Marx never stated that it was because of human nature that the workers of the world would unite, if he truly believed in some liberal leveling of people towards a universal human nature, why did he only emphasize the workers of the world? Why didn’t he say, "Bourgeoisie, peasants, and proletariat unite! You have nothing to lose but your chains!" What is it about the workers of the world that deserved this distinction? Could it be that perhaps with the development of industrial capitalism a new class emerged in society that had the Revolutionary potential to overthrow the capitalist class? Could it be instead of a universality that existed before our creation, universality among workers was created through the development of the Proletariat class in societies where industrial capitalism began to take root, and this is what brought Marx to make the demand for the workers of the world to unite? To Marx, it was not because humans are all the same that brought him to this conclusion of worldwide revolution, but instead, it was capitalism’s leveling of peoples into an oppressed class to fuel the fires of industry across the world that created this universality for a worldwide revolution. To believe Usmani’s major distortion of Marx is to eliminate the class struggle in its entirety and to level what remains into a universal Liberalism.

Usmani’s next problem with the blank slate thesis is that it is too hard for him to think dialectically.

“If humans were blank slates, it would be very difficult to make much sense of the laws of motion of human societies. It would lead to an analytical impasse.”

What impasse is Usmani speaking of? If we are to believe in human evolution and possibilities for another society, then why would we adopt a position that contradicts the very ideas of change? Is Usmani going to make the claim that the bacteria we evolved from had a human nature that is similar to ours? Or perhaps is he going to claim not only do we have a human nature, but also a bacteria nature? How many natures do we have Usmani? This position attempts to put humanity’ history in stasis. At this point, we could say that Usmani’s position regarding humanity is closer to having a creationist stance than any semblance of an evolutionary one. Thus making his version of historical materialism independent of human’s interactions with the world and its ever changing conditions. This faux materialism is indeed nothing more than the old spiritualism of liberal humanism and makes a person incapable of accounting for any evolutionary changes or adaptations. Which makes his addition to Marx’s "Theses on Feuerbach" all the more wrongheaded.

When Marx says, “Philosophers have only interpreted the world, the point is to change it.”

Usmani shouts back, “If you want to change the world, you have to make sense of it first.” The Blank Slate Thesis makes that impossible.”

But as we know it is actually Usmani’s belief in human nature that makes him incapable of understanding or changing the world.

So if there were to be a new thesis added to Marx’s it would be:

“If you want to change the world, you have to make sense of it first.” Human nature (determinism) makes that impossible.”

Usmani’s final problem with the Blank Slate Thesis is that it makes people incapable of being able to put themselves in others' shoes and instead allows prejudices of elitism to emerge from other members of the working class who have adopted bourgeoisie politics.

But I would argue it is exactly Usmani’s determinist position that allows this prejudiced elitism in the left to emerge, because this view does not allow for any other possibilities. Usmani’s position dictates that there is a specific way humans are that is independent and outside of them. The possibilities for change are completely eradicated under this position, and allow this bad blood between those who are "woke" and those who are not to brew.

Also the capabilities of putting ourselves in someone else’s shoes are not eliminated under the Blank Slate Thesis, but are in fact just as viable as a person who holds a position of belief in human nature. As Sartre taught, we have the radical freedom to become whomever we want, and because of this we have the capability to be able to imagine ourselves in other people’s positions and understand what they are going through. But let it be noted that neither position will allow someone to experience the same things as someone else has, but will be able to create empathy.

We cannot allow determinism to infiltrate our politics. Determinist arguments no matter the intent put behind them or popularity will always be reactionary. We must not sell short the minds of the future of our movements by moving towards ideas that take the radical power of change out of our hands, and give it to the apparition of some nature that pre-dates our births and determines the way we act. We must unshackle ourselves from determinism and move towards the radical rreedom’ of anti-determinism. We must take upon the view as Sartre did, that our essence does not determine our existence, but instead our existence determines our essence, and then and only then can we argue about the nature of humanity in a revolutionary way.

[The photo is Jean-Paul Sartre, the French philosopher.]

One comment on “Why Socialists Shouldn’t Believe In Human Nature”