What Do We Really Want Policing To Be?

Brooklyn College sociology professor Alex Vitale’s provocative new book, The End of Policing, comes amid the national debate about deadly force by police and the rise of the Black Lives Matter movement. But Vitale — one of the country’s fiercest advocates of police reform over the past 25 years — thinks police killings are a symptom of a much broader issue. As the coordinator of the Policing and Social Justice Project at Brooklyn, he argues that police in recent decades have taken on a “warrior mentality” that is fundamentally incompatible with the ideal of equal justice. And he thinks the solutions typically advocated by progressives are not the real answer. Following are edited excerpts of Vitale’s recent appearance on the CUNY Book Beat podcast.

How has policing changed over the past few decades?
What we’ve seen is a real expansion in the scope of the police mission. It started with the war on drugs that rolled out in the 1960s and really ramped up in the ’80s, but we can also see this in school policing and the use of police to deal with a whole range of low-level, quality-of-life-type offenses related to homelessness, mental illness, etc. So, all of these have increased the interactions between the police and communities and have really shifted our whole approach of government away from solving problems through restorative approaches, like really building affordable housing, to using punitive and coercive mechanisms instead. And we’ve seen a broader political shift that favors these kinds of responses so that all kinds of institutions — our social welfare system, schools — have become more punitive and more controlling.

You use the terms “over-policing” and “warrior mentality.” What do they mean, in your view?
I think the militarization of policing that we’ve seen is sort of the tip of the broader iceberg in which the political leadership of the country at all levels has told the police to wage a war on crime, a war on drugs, on terror, on gangs — a war on disorder. So there’s developed a warrior mindset in policing that views large swaths of the public as an enemy to be managed, controlled and feared, and this has, I think, been a major contributor to some of the most egregious shooting incidents we’ve had over the last four or five years.

Has there in fact been an increase in police use of deadly force, particularly against young black men, or is it that we hear about it, and more quickly, because of social media and cable news.
It’s hard to know because the police don’t keep these statistics or don’t make them publicly available. We have some data from individual cities so we know, for instance, that in New York City police kill many fewer people than they did in the ’60s and early ’70s after they implemented a whole series of firearms control regimes, which does show that it is possible to reduce the use of deadly force. However, what I try to point out is that the use of deadly force is just the tip of the iceberg of over-policing. When we look at these individual incidents and unpack what was driving them, we can see the failures of our overreliance on policing in many, many of these cases. And in my mind it’s always been tinged with racial animus and the mobilization of racialized fears.

The title of your book is very provocative. What do you mean by The End of Policing? 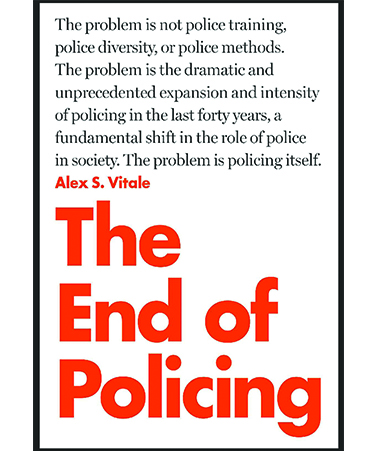 I think the title has a kind of double meaning. One is meant to pose the question of what is it that we really want the police to be doing? What is the end purpose of policing? But also, the title is intended to signal an approach that says that for lots of what police do now there are alternatives that are less coercive and that treat people with more dignity and are often actually more effective. So, when we encounter a problem with policing what we should be asking ourselves is not how to fine-tune the response of the police in that situation, but why are we even relying on police in that situation to begin with? For instance, at least a quarter of all people killed by police in the U.S. are having a mental health crisis at the time they’re killed and many of them have been well known to public health officials, the community and the police. And yet nothing is ever done in most cases to really address their underlying mental health problem. So they’re allowed to spiral out of control to the point where it becomes a crisis, and the only real resource available to respond to that crisis is policing. The idea of successfully prosecuting a police officer, that’s not going to do anything to change the underlying dynamic. We have to get out of this mindset that just a little bit of additional training or holding officers accountable is the solution to, in this case, the collapse of the mental health system.

You disagree with most police critics and reform advocates who talk about things like de-escalation training and greater accountability. Wouldn’t that change the outcomes in many cases – for instance, the death of Eric Garner on Staten Island?
It’s certainly possible that a different approach to the use of force might have saved his life — but let’s not forget why that confrontation escalated in the first place. It was because Eric Garner had experienced dozens of punitive interactions with the police over the fact that he wasn’t paying the proper taxes on loose cigarettes and was possibly selling marijuana on a low level, and these behaviors had become high priority issues for large numbers of police. There were about eight or 10 officers there to engage him and his frustration at this constant criminalization of what, for him, was essentially survival behavior is what caused him to not cooperate with police. So you can give police de-escalation training, but what are they going to do when someone they are intending to take enforcement action against resists them? Are they just going to walk away? They’re not. No amount of training is going to overcome those institutional imperatives. The question is why is that such a winning strategy in American civic life?

How does that change?
Part of what’s so exasperating is how bipartisan the consensus has been in favor of mass incarceration and turning everything over to the police — progressive mayors, Democratic governors and presidents have all been deeply involved in this. So I decided to write a book that has more public engagement to it rather than a strictly academic book. For everyone who writes a well-researched academic book and thinks that somehow because they’ve laid out the argument and presented the data that it’s going to lead to change, that’s a kind of Pollyannaish worldview. We’re not lacking in data or arguments, we’re lacking in political will to do these things. So my outreach focus for the book has not been on academics and policymakers, it’s been on grassroots politics.

This Q & A is excerpted from a CUNY Book Beat podcast. To listen to the entire interview, go to www.cuny.edu/bookbeat.