VoteVets for Buttigieg: Who’s Really Keeping Us in The Dark About Campaign Funding? 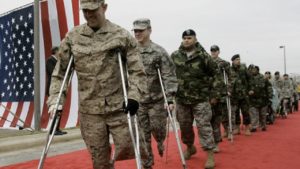 In a Democratic primary field that once featured four military veterans, only two are still marching toward the White House.

Flush with cash from nearly 60 billionaire donors, Buttigieg has been marketing himself, lately, as the most electable “moderate” in the race, while playing the veteran card to the hilt.

In an urgent fund-raising appeal, Mayor Pete implied that Sanders wasn’t truly committed to getting big money out of politics because “nine dark money groups” are making independent expenditures on his behalf and rallying voters as part of a “People Power for Bernie” coalition.

(In the interests of full disclosure, I should note that I belong to two of these outfits—DSA and a local affiliate of Our Revolution; I’m also a founding member of Labor for Bernie, which encouraged union members to back Sanders in 2016 and again this year, all without official coordination with his campaigns, then or now).

As the Center for Popular Democracy reminded Buttigieg, all of the above entities are, to varying degrees, connected to “membership-based organizations that aim to bring a multi-racial, working class and young electorate into the political process.”

The growing constellation of political non-profits, Super PACs, and actual dark money groups spawned by Citizens United are most problematic (and far better funded) when aiding corporate Democrats, like Buttigieg, or right-wing Republicans like Donald Trump.

According to the Center for Public Integrity, one of Buttigieg’s own biggest “independent spenders” in the race– a self-styled “progressive organization of veterans” called VoteVets– has its own dark money side. Nevertheless, Mayor Pete, was glad to have VoteVets’ PAC wage a $3 million “air war” on his behalf, via TV ads in Iowa, New Hampshire, and Nevada.

Just this month, the group spent $300,000 on a new ad, highlighting Buttigieg’s military experience, after his senior campaign advisor Michael Halle signaled, in a tweet, that such content would be “critical” viewing for Nevada Democrats before they caucused on Feb. 22. Halle’s not so subtle (or independent) suggestion to VoteVets is now the subject of Federal Election Commission complaint filed by a watchdog group, the Campaign Legal Center.

“Important Voice” For Who?

VoteVets was founded in 2006. On its website, it claims the backing of “more than 700,000 veterans, military families, and their supporters.”  Over the past 14 years, it has raised and spent more than $100 million on Democratic candidates.

When VoteVets co-founder and chair Jon Soltz first embraced Buttigieg three months ago, he pledged a maximum direct donation to his campaign. But, as The New York Times reported, far great financial support would be forthcoming “from the organization’s super PAC and its 501 (c) (4) arm, which can engage in issue advocacy and is not required to disclose its donors.”

Buttigieg in turn hailed VoteVets as “a very important voice for veterans,” particularly from his own post-9/11 generation. Yet, according to one veteran active in progressive politics, the group has “no members, just a big email list.” He points out that VoteVets “didn’t consult anyone” before endorsing Buttigieg and is basically offering itself as a “money funnel” for the big donor class of the Democratic Party.

As this critic noted, Buttigieg has many affluent contributors who have already “maxed out” on the amount ($2,800) that they can give directly to his campaign at fundraising parties in Napa wine caves or similar high-priced venues.

Thanks to Citizens United, wealthy individuals can still fund his candidacy through SuperPACs whose “independent expenditures” are unlimited. A group using the “veteran brand” and proclaiming its muscular commitment “to the destruction of terror networks around the world” provides perfect camouflage for corporate benefactors as well.

A quick look at 2019 Federal Election Commission filings reveal who—from labor and business—was funneling campaign cash through VoteVets, in the last election cycle. In the big spender category, we find a  $1.5 million donation from media magnate Michael Bloomberg, a non-veteran who has, I’m sure, become less generous with VoteVets’ since it endorsed Buttigieg.

Various Wall Street money managers, private equity firms,  and the pollution-prone Duke Energy all gave hundreds of thousands of dollars to VoteVets to aid “pro-veteran” candidates in 2018. According to a Feb. 11 report in The New Republic, “the organization’s recent donors include General Dynamics, Pfizer, and Cigna.”

Last week, I tried to arrange a phone interview with VoteVets to find out whether its TV ads for Buttigieg were funded by veterans or corporations and wealthy individuals? Its main PR person, Eric Schmeltzer, asked that any questions be submitted via email instead. He then reassuringly explained that he is “walled off” from “the IE side of VoteVets.”

When Carrie Levine from the Center for Public Integrity sought answers to similar questions about the 52 donors who raised $5.5 million for VoteVets Action Fund in 2014, she was told, by Schmeltzer, that the group does not reveal its donors “because the law does not require disclosure of people’s identities.” According to Schmeltzer, “we maintain that privacy for individuals.”

Schmelzter referred me to Doug Gordon, co-founder of Upshift Strategies, a DC consulting firm involved with Vote Vets independent spending. Via email, Gordon confirmed that its “PAC has spent about $3m so far on TV ad spending” and “follows all FEC guidelines when it comes to fundraising and reporting.”

Neither spokesperson for VoteVets would provide details on what role veterans actually played in deciding to endorse Buttigieg, nor would they provide a breakdown of where the $3 million spent on the candidate’s behalf came from—members of the group or wealthy donors to it? As Gordon explained, “We don’t comment too much on VoteVets PAC spending.”

In the meantime, it’s clear that Democratic primary candidates who live in glass houses should not be throwing stones at students, workers, community organizers, social justice campaigners, or environmental activists who are aiding a real progressive with greater transparency, much smaller war chests, and a bigger base of dues-paying members than VoteVets.

Posted February 26, 2020 Electoral Politics, Left Politics, United States by Dan Fischer
About Author
STEVE EARLY is a labor journalist, lawyer, organizer, or union representative active since since 1972. For 27 years, Early was a Boston-based staff member of the Communications Workers of America. He finished his CWA career in 2007, after serving as administrative assistant to the vice-president of CWA District 1, which represents more than 160,000 workers in New York, New England, and New Jersey.