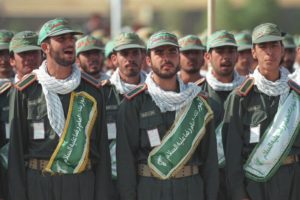 There is little question that the Iranian Revolutionary Guard Corps (IRGC) is bad news. Some of its units have engaged in severe repression of nonviolent dissidents, supported Assad’s brutal counter-insurgency operations in Syria, backed hardline Islamist militia in several foreign countries, and more.

But the Trump Administration’s unprecedented decision to label the IRGC as a terrorist organization—the first time the United States has given such a designation to any entity of an internationally recognized government—is dangerous and irresponsible.

Trump justifies the terrorist label on the grounds that the Revolutionary Guards have provided direct support for repressive regimes and backed armed extremist groups. Of course, the same could be said regarding some U.S. government entities. Indeed, in a retaliatory move, the Iranian government has now labeled the U.S. Central Command, which oversees U.S. military operations throughout the Middle East, as a terrorist organization as well.

U.S. forces under the Central Command and Revolutionary Guard units have been operating within miles of each other in both Syria and Iraq, often working jointly in the fight against ISIS. Indeed, IRGC-led Iraqi Shia militia have been recognized as more effective than the U.S.-backed Iraqi Army in defeating these Salafist extremists, though both have also engaged in war crimes.

With the IRGC and their allies now in the same category as ISIS and Al-Qaeda, the risk of an armed confrontation in these unstable war zones increases, and thereby the threat of a war between the United States and Iran.

This may have been the goal of Secretary of State Mike Pompeo and National Security Advisor John Bolton, who apparently convinced Trump to take the controversial decision and have long pushed for a military confrontation with Iran.

IRGC-backed militias in Lebanon and Iraq serve as the armed wing of political parties which have leading roles in their country’s respective coalition governments. Since these parties are now formally considered to be “affiliated with terrorists,” this could hamstring U.S. diplomatic efforts in those countries. Trump appears to want to force the State Department to adopt a simplistic “you are either for us or against us” policy to the very complex and sensitive political constellations in the Middle East.

With more than 125,000 members, the IRGC is one of the largest units of the Iranian armed forces. Iran has near-universal male conscription, in which the IRGC often gets priority over the other branches of the armed services for the best recruits. But now all of these young men, some of whom have no desire to even be in the armed forces, will now be labeled as “terrorists.”

Like the militaries of Egypt and a number of other autocratic countries, the IRGC controls large segments of the Iranian government, the business sector, and social system unrelated to any military or security functions. These institutions employ an estimated 11 million Iranians, meaning they, too, could be designated as members of a terrorist organization.

In an asylum case I was involved with a few years ago involving an Iranian dissident, the ICE lawyer noted that he had attended a technical college that was affiliated with the Iranian Revolutionary Guard. The judge recognized that the school was one of many institutions the IRGC controlled and that his training was void of political content or military applications and thereby granted him asylum.

With the IRGC now formally designated as a terrorist organization, the freedom of countless other asylum-seekers with similar affiliations are now in jeopardy.

A related problem is that any business from Europe, the Middle East, or anywhere else that sells a printer, books, a stapler, or anything else to any of the thousands of entities controlled by the IRGC, could now be targeted by the U.S. government for providing material support for a terrorist entity.

Ironically, just a few years ago, the Trump organization invested millions of dollars into a failed attempt to build a Trump Tower in the Azerbaijani capital of Baku that, according to an investigation by The New Yorker, appeared “to be a corrupt operation engineered by oligarchs tied to Iran’s Revolutionary Guard.”

Interestingly, the effort to label the IRGC as a terrorist organization was initially pressed by a bipartisan group in Congress more than a decade ago, including such prominent Democrats as Hillary Clinton, Chuck Schumer, Dianne Feinstein, Patty Murray, and Dick Durbin. But the Bush Administration recognized its dangers and blocked its adoption, as did the Obama Administration several years later in response to a subsequent effort.

Most Iranians see the Revolutionary Guard as repressive and corrupt, yet also as defenders of the nation, heroes of the Iran-Iraq war, and protectors of national sovereignty. As a result, Trump’s move will likely strengthen their influence, rather than weaken it.

Individuals and units within the IRGC responsible for war crimes and severe human rights abuses, illegal financial activities, and similar activity should certainly be subjected to sanctions. However, this overreaching designation of the entire Revolutionary Guard as a terrorist organization is misleading, illogical, and dangerous.

Originally posted at The Progressive.

Posted April 21, 2019 Civil Liberties/Repression, Iran, U.S. Foreign Policy, United States, War and peace by Jason Schulman
About Author
Stephen Zunes is a professor of politics and international studies at the University of San Francisco. A regular contributor to The Progressive, he serves as a senior policy analyst for the Institute for Policy Studies.