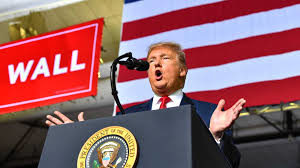 Socialists must organize a national movement against Trump’s national emergency.

U.S. President Donald J. Trump declared a national emergency on Feb. 15, arguing that it was necessary to build a wall along the nearly 2,000 mile U.S.-Mexico border because of a criminal invasion taking place there. Trump had gone to Congress to ask for five billion dollars, but a bipartisan agreement would give him only $l.375 billion, so to bypass Congress he declared the national emergency, which will allow him to allocate funds as he sees fit.

Trump’s action creates a constitutional crisis and represents another step towards an authoritarian government. With this declaration Trump can not only spend money that Congress denied him, but the national emergency law also gives him has many powers that include shutting down electronic communications, freezing bank accounts, and deploying troops to suppress domestic unrest. The declaration gives him virtually dictatorial powers.

In fact, there is no immigrant invasion. According to the U.S. government’s own reports show that immigration at the southern border does not represent a national emergency. The number of unauthorized immigrants has declined significantly since 2007; and there are a million fewer undocumented immigrants in the United States today than in the past. Finally, most immigrants have lower crime rates than the U.S. population as a whole.

By not vetoing the bipartisan $1.375 billion bill, Trump avoided another government showdown that might have led to sick-ins or strikes by government employees and other workers. Sara Nelson, president of the Association of Flight Attendants, told the AFL-CIO leadership,  “Go back to talk with your locals and international unions about all workers joining together to end this shutdown with a general strike!” And it might have happened. The last strike ended when workers at La Guardia airport started to walk out threatening cascading shutdowns at airports across the country. So Trump turned to a declaration of national emergency instead of using his veto.

Since 1976 U.S. presidents have had the power to declare national emergencies and have done so 59 times, especially since the 1990s, but usually for recognized national disasters such as floods or health issues such as swine flu, though a number have had to do with international political issues. No past president used the national emergency to bypass Congress’ power of the purse, that is, its control over the taxing and spending. And no president did so for an alleged emergency that most do not see.

Before Trump declared the border wall to be a national emergency, both Republican and Democratic Party leaders expressed their opposition to him doing so. However, after Congress had passed the funding bill and Trump had announced that he would declare a national emergency, Senate Majority Leader Mitch McConnell stated that he supported the president’s action. The Democrats and some Republicans have pledged to resist the president’s national emergency, proposing Congressional resolutions and threatening lawsuits against it, though they already undermined their case by voting for the bipartisan $1.375 billion bill. Legal experts think there is little likelihood that Trump can be stopped in the courts.

While we are involved in many struggles against Trump’s administration, we socialists have a responsibility to organize a national protest movement against this latest dangerous step toward authoritarian government. There is a national emergency—but it is Trump’s threat to our democracy.