Travel Notes: Impressions of the Left in Catalunya 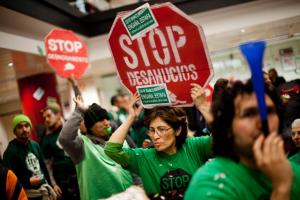 I spent a few days in Barcelona, meeting with older and younger activists, some of them former members of the Revolutionary Communist League (LCR), others younger activists in the group Anticapitalistas or in Procés Constituent. I also joined two protest demonstrations and gave a talk at the Ateneu Rebel for the journal Viento Sur for which I write. Here are my impressions, just impressions.

On the afternoon of April 18, I joined two demonstrations in Barcelona. The first was a demonstration by Plataforma de Afectados de Hipoteca (PAH) at the offices of the Partido Popular de Barcelona to demand the passage and implemntation of a new law dealing with foreclosures and housing issues. My hosts tell me that this has been the most important social movement of the last couple of years, while the movimento de las plazas, that is of indignados was the most important political movement.

The housing movement in Catalunya pushed for this law that, I am told, that would be the best law in Europe, but the government will work to have it overturned by the Supreme Court. Under this law, people could only be expelled from their apartments if they were given either with a low-rent apartment or an apartment in public housing. In Spain, if one suffers a foreclosure, not only does he or she lose their house, but they have to pay the difference between what the bank paid for the foreclosed house and what is owed on the mortgage.

The second demonstration an hour later was a Mare Mortum movement protest at office of the Commission of the European Union. Mare Mortum movement, or Sea of Death, refers to the refugees coming to Europe from the Middle East, many of whom have died at sea. As many as 600 bodies of refugies, for example, remain in a boat that sank off the coast of Italy. There were about 100 people at the demonstration until it was joined by about 100 of those coming from the foreclosure movement demonstration, and the 200 or so protestors blocked the Avenida de Gracias.

In the evening of April 19, I went out to talk with four of the leaders and activists of Anticapitalistas, men and women in their 20s to 40s. They came out of older left organizations and began organizing about fifteen years ago with less than 100 members, today they have some 700 throughout Spain. They participate in and are a factor in the young political party of the left, Podemos.

That same night, as New Yorkers were voting, I spoke in Ateneu Rebel about the American elections and the Bernie Sanders campaign to an enthusiastic crowd of about 50 people. Surgi Cutillas of Plataforma per l’Auditoria Ciutadana del Deute (Platform for a Citizen Audit of the Debt) also spoke about the economic and social situation of the European Union.

The crowd’s questions indicated that they well informed not only about Europe, but also about American politics. And afterwards we were off to do an interview for a local public television show. Like us, people in Europe are hoping that the Sanders campaign represents the beginning of a new era in American politics.

Posted April 20, 2016 Left Politics, Spain by Dan La Botz
About Author
DAN LA BOTZ is a Brooklyn-based teacher, writer and activist. He is a co-editor of New Politics.