They Took Control of Their Workplace — and They Won 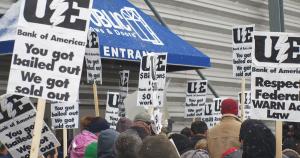 Ten years ago, members of UE Local 1110 made history by occupying their factory, Republic Windows and Doors. They captured the imagination of a nation reeling from financial collapse, won an endorsement of their cause from the president-elect, and forced one of the nation’s most powerful banks to come to the table and negotiate.

The September 15, 2008 collapse of the Lehman Brothers investment bank has precipitated a full-scale financial crisis. Both presidential candidates — Senators John McCain and Barack Obama — left the campaign trail to vote for a $700 billion bailout for the financial industry, but that largess was not extended to working people. Only the crisis “trickled down” to workers: half a million pink slips were issued in November.

The 240 UE members at Republic were told by the company on Tuesday, December 2 that the plant would be closing at the end of the week. Union leaders were not entirely surprised. As the UE NEWS reported, “Local 1110 members had been aware for a few weeks that the company was moving equipment and materials out of the plant, so they had suspected the worst. The company told the union that it was shutting down because its chief creditor, the giant Bank of America, was cutting off its line of credit.”

On the day of the announcement, UE members picketed giant bank’s downtown Chicago headquarters, chanting “You got bailed out, we got sold out!” Local 1110 was not going to go quietly.

Standing Up By Sitting Down

Once the union suspected equipment was being moved out, Local 1110 leaders had started watching the plant at night and on weekends. They worked closely with national staff and regional leadership to develop a two-fold strategy: occupying the plant and launching a public campaign to crystallize the widespread public anger about the bank bailout. Occupying the plant would require organizing the membership to be ready to do so: leaders talked with the members about the plan, and 30 workers made the commitment to be arrested if necessary.

Increasingly angry as the company made it clear they they had no intention of paying workers for their unused vacation, or the 60 days of pay workers are entitled to under the WARN act (if not given 60 days’ notice), UE members embraced the occupation plan. The UE NEWS reported:

So at the end of their final workday on Friday, workers did not leave. People from the other shifts came in and joined them. They refused to leave until they had achieved some justice. In the words of Melvin Maclin, the local’s vice president, “We hoped to get back some of our dignity.”

As Rev. Jesse Jackson told them, two days into the plant occupation, they “stood up by sitting down.” They organized themselves into shifts, set up committees to keep the plant clean, set strong rules against drinking, smoking and drugs, and banned outsiders from coming past the entranceway.

UE’s officers issued a statement [1] declaring “the unqualified support and encouragement of the UE National Union” for Local 1110’s “audacious initiative.” Soon the workers were flooded with support from union members, community supporters, and politicians in Chicago, across the country and around the globe. Local supporters maintained a vigil in front of the plant, solidarity rallies were held in cities across the country, and donations and messages of solidarity arrived from all over.

President-elect Obama publicly endorsed the workers’ goals, saying “When it comes to the situation here in Chicago with the workers who are asking for their benefits and payments they have earned, I think they are absolutely right.” U.S. Representative Luis Gutierrez (D-Chicago) provided crucial support, visiting the workers and joining UE in negotiations with the company and Bank of America. Other members of Congress also visited the plant and offered support, and leaders in city and state government announced their intention to cease business dealings with Bank of America.

On December 10, thousands joined a solidarity rally at Bank of America in downtown Chicago. That evening, the workers approved a settlement [2].

“The occupation is over. We have achieved a victory. We said we would not go out until we have achieved justice. And we have it.”
—UE Local 1110 President Armando Robles

The settlement negotiated by Local 1110 with Republic and Bank of America totaled $1.75 million and provided the workers with:

Local 1110 Vice President Melvin Maclin, who passed away in 2015 [3], told the UE NEWS after the settlement, “It’s not like we’re the first plant to have this happen to us, but we’re the first to fight back.” And he expressed hope that the plant might reopen, telling the union paper “It would be a dream come true if it were to reopen and we all get our jobs back.”

A little over a month after Local 1110 members won their settlement, the California-based company Serious Materials announced it would purchase Republic’s assets, and by the end of February the company had reached an agreement with Local 1110 to recognize the union and ensure that former Republic employees would be rehired at their former rate of pay. Vice President Joe Biden visited the factory in April, praising Serious Materials’ willingness to work with the union. “Instead of saying, if you want to come back I’m going to break your union, you said, come back, union and all. That’s a big deal.”

Biden’s optimism about management’s intentions proved overly optimistic; in February of 2012, after just under three years in operation, local management told Local 1110 members that they faced immediate closure of their workplace once again. In response, the UE members once again occupied the plant, this time with the demand of saving their jobs by finding a new buyer. Corporate management agreed to keep the plant open for 90 days while working with the union to find a new buyer, and to negotiate a severance package for all Local 1110 members.

Working with The Working World [4], an organization that helps finance worker cooperatives, some members of Local 1110 reopened the business several months later as New Era Windows Cooperative [5]. The company is now a worker co-operative, owned and managed collectively by UE members. The founding of New Era helped reintroduce interest in unionized worker co-operatives as a path to economic justice [6], both within UE and across the country.

When Rev. Jackson visited the Republic occupation, he told UE members that he saw in their action “the beginning of a larger movement to resist economic violence.” Local 1110 leaders took their story on the road in the months after their victory, speaking throughout the Northeast, the Great Lakes region and the South. The well-attended “Resistance and Recovery” tour, co-sponsored by UE, Jobs with Justice [7], and other organizations, connected the struggle at Republic to “the need for a national economic recovery package for working people, not for rich bankers,” according to the UE NEWS.

Local 1110 members were also the stars of filmmaker Michael Moore’s 2009 film Capitalism: A Love Story. The UE NEWS review of the film noted that “[w]hile there’s plenty of characteristic Michael Moore humor throughout the film, the grim tales of the looting of an entire society by its own wealthiest members put the viewers in mood of anger and depression. There’s not a lot to be hopeful about — until Moore takes us to Republic Windows and Doors during the plant occupation by UE Local 1110 members.”

In October 2009 more than 5,000 people protested at the American Bankers Association annual convention. The rally was addressed by Robles and by Keith Scribner, the president of UE Local 1174. The members of Local 1174 were also fighting a plant closing caused by a decision made by a major bank, in this case Wells Fargo.

Unfortunately, President Obama and the new Democratic majorities in Congress failed to act on the widespread popular demand for an economic recovery package for working people, and unemployment continued to climb throughout 2009, reaching 10 percent by the end of the year and remaining over nine percent during the whole of 2010.

In 2011, public anger with economic inequality erupted in the Occupy Wall Street movement, which framed their movement as one of “the 99 percent” against the wealthiest one percent who own 40 percent of all the wealth. Interviewed by the UE NEWS about his participation in OWS, Western Region President Carl Rosen said:

People ‘get’ the connection with Republic Windows and Doors and the plant occupation there. People understand that was a precursor to what’s going on now, and that UE correctly identified what was going on three years ago with the slogan, “Banks got bailed out, we got sold out,” which all of Occupy is now using coast-to-coast.

Bringing a Corporate Crook to Justice

On the fifth anniversary of the occupation, December 5, 2013, former Republic CEO Richard Gillman was sentenced to four years in prison and fined $100,000 for stealing over half a million dollars of company assets. The plant occupation played a significant role in bringing Gillman to justice, as it brought media attention to the company and preserved crucial evidence used in the criminal case.

The Republic Windows and Doors Occupation demonstrated that, with a firm commitment to UE principles of rank-and-file democracy, unity, and pursuing a policy of aggressive struggle, even a small group of committed workers can take on corporate power and win.